Bill Cosby is ordered to stand trial in sex case

Accuser Andrea Constand, who is now a massage therapist in Toronto, was not in the courtroom 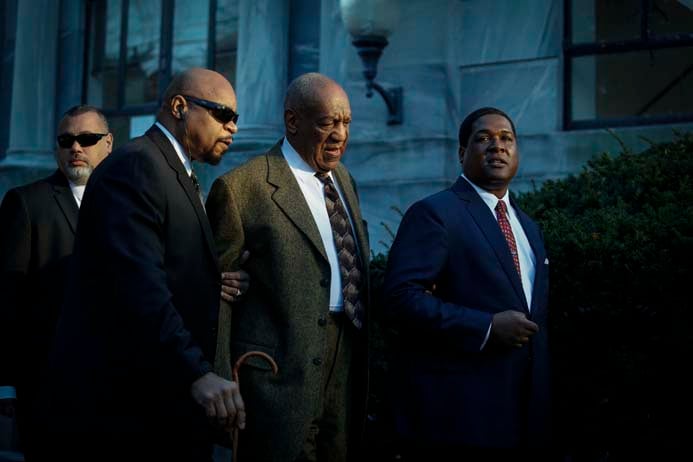 Comedian Bill Cosby arrives at the Montgomery County courthouse for Pre-trial hearings in the sexual assault case against him in Norristown, Pennsylvania February 2, 2016. (Kena Betancur/AFP/Getty Images)

NORRISTOWN, Pa. — She called him “Mr. Cosby” and considered him a trusted friend and mentor.

But 20 minutes after Bill Cosby offered her three blue pills and told her to take them with the wine he had set out, Andrea Constand’s legs began to wobble “like jelly,” her eyes went blurry and her head began to throb.

Cosby helped her to a couch in his living room, where she later realized he violated her as she lay helplessly in a stupor, she told police in 2005.

On Tuesday, a judge ordered the 78-year-old Cosby to stand trial on sexual assault charges on the strength of Constand’s decade-old police statement, sparing the former Temple University employee the need to testify at the preliminary hearing.

Cosby could get 10 years in prison if convicted in the case, the only criminal charges brought against the comedian out of the barrage of allegations that he drugged and molested dozens of women over five decades. He is free on $1 million bail.

A trial date was not immediately set.

Cosby, looking less frail than he did when he was arrested five months ago, seemed unfazed by District Judge Elizabeth McHugh’s decision.

“Mr. Cosby is not guilty of any crime, and not one single fact presented by the commonwealth rebuts this truth,” his lawyers said in a statement afterward.

The hearing was not the face-to-face confrontation between accuser and accused that some had anticipated: Constand, who is now a massage therapist in Toronto, was not in the courtroom, and the judge ruled that she did not have to testify at this stage. Instead, prosecutors had portions of her 2005 police statement read into the record.

While authorities in recent months have paraphrased her account and quoted fragments, this was apparently the first time that large sections of her statement _ or Cosby’s, for that matter _ were made public.

Constand told police that the comedian penetrated her with his fingers and fondled her at his suburban Philadelphia mansion in 2004 after giving her what he said was herbal medication. After taking the pills, she said, “everything was blurry and dizzy.”

She said she awoke with her bra askew and did not remember undoing it.

Cosby’s lawyers argued unsuccessfully that having a police officer read Constand’s statement instead of putting her on the stand would be third-hand testimony and would deprive him of his right to confront his accuser. But reading a police statement into the record is common practice at preliminary hearings in Pennsylvania.

The defence also argued that Constand was having a relationship with a married man and that they had engaged in “petting” during her two or three earlier visits to his home.

In his own 2005 statement to police, excerpts of which were also read in court, Cosby said Constand never said “no” as he put his hand down her pants. He told police the pills were over-the-counter Benadryl that he takes to help him sleep.

Cosby attorney Brian McMonagle also questioned why Constand continued to see the comedian and even returned to the house to meet with him after the alleged assault.

In addition, the defence seized on discrepancies in the three police statements Constand gave, including her shifting memory of precisely when the encounter occurred.

Cosby settled with Constand for an undisclosed sum in 2006 after testifying behind closed doors about his extramarital affairs, his use of quaaludes to seduce women and his efforts to hide payments to former lovers from his wife.

But prosecutors reopened the criminal case last year after dozens of women levelled similar allegations and after Cosby’s sealed testimony in Constand’s lawsuit was made public.

Cosby’s lawyers are trying to get the case thrown out, arguing that a previous prosecutor made a binding promise a decade ago that the comic would never be charged.

He is also fighting defamation lawsuits across the country for allegedly branding his accusers liars and is trying to get his homeowner insurance to pay his legal bills.

The Associated Press does not normally identify people who say they were victims of sex crimes unless they agree to be named publicly, which Constand has done.