Quebec government said it would accelerate immigration procedures for blogger sentenced to 1,000 lashes in Saudia Arabia 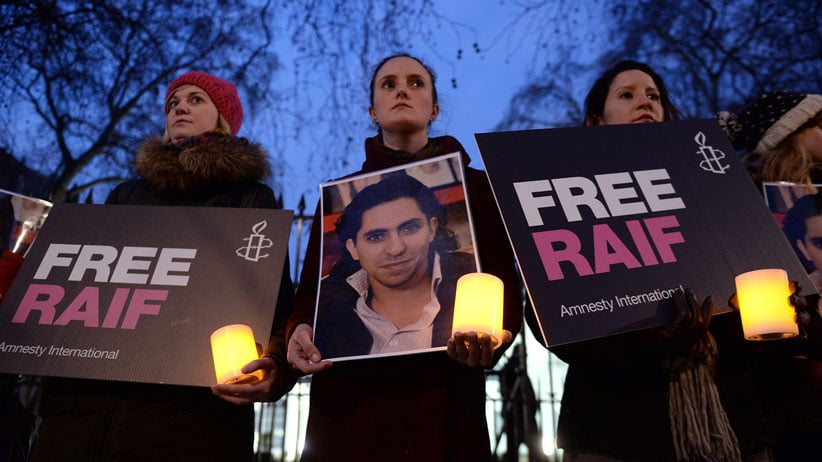 MONTREAL – The Quebec government said it would accelerate immigration procedures for Raif Badawi, the blogger in Saudi Arabia who has been sentenced to 1,000 lashes but was spared Friday.

It was feared his punishment would resume after the Supreme Court of Saudi Arabia upheld the sentence imposed on the blogger, but the Amnesty International office in Paris said it had received confirmation the punishment was postponed.

Badawi is not a Canadian citizen, although his wife and children fled Saudi Arabia in 2012 and settled in Sherbrooke, Que., in 2013.

Ensaf Haidar, Badawi’s wife, took to Twitter on Friday to repeat her plea for an end her husband’s punishment.

“I repeat my appeal to his majesty King Salman to pardon my husband … and stop his flogging,” she wrote.

Quebec Immigration Minister Kathleen Weil told reporters Friday the province would offer Badawi an immigration selection certificate on humanitarian grounds, which would speed up the process to allow him to reunite with his family in Quebec.

Badawi’s detention and sentence have stirred up worldwide condemnation and Quebec politicians unanimously adopted a motion in February calling for his immediate release.

Weil was accompanied by members of all other provincial parties in announcing the measure.

“I think it just shows that we’re all of one mind,” Weil said. “It means that we believe that his treatment is outrageous, how he’s being treated and for what he has done, and it’s beyond limiting freedom of expression — it’s cruel and unusual punishment, it’s absolutely horrendous.”

Prime Minister Stephen Harper has also spoken out against Badawi’s treatment, but has said Ottawa’s influence is limited by the fact he is not a Canadian citizen.

Edouard Delaplace, director of judicial affairs with Lawyers Without Borders Canada, says the Saudi king could ask the high court to intervene again, but a political intervention might be more realistic at this point.

“It’s quite likely that it’s more the political channel that has to be explored,” Delaplace said. “Maybe with the beginning of Ramadan next week, there is an opportunity for the king to give his pardon and release Raif Badawi.”

Badawi has been imprisoned since 2012 for criticisms in his blog that promotes human rights and democracy in his country.

The Saudi court had sentenced the 31-year-old man to 10 years in prison and 1,000 lashes for criticizing Saudi Arabian clerics.

However, after a first session of 50 lashes in January, all others were postponed, apparently due to health concerns and undisclosed reasons.

Weil said she spoke with Badawi’s family on Thursday evening.

“I knew, in the tone of her (Haidar’s) voice last night, every Thursday night is agony, agony for her, and every Friday is agony until she gets the news,” Weil said.

– With files from Alexandre Robillard in Quebec City.