The carrier vanished Sunday halfway through a two-hour flight between Surabaya, Indonesia and Singapore 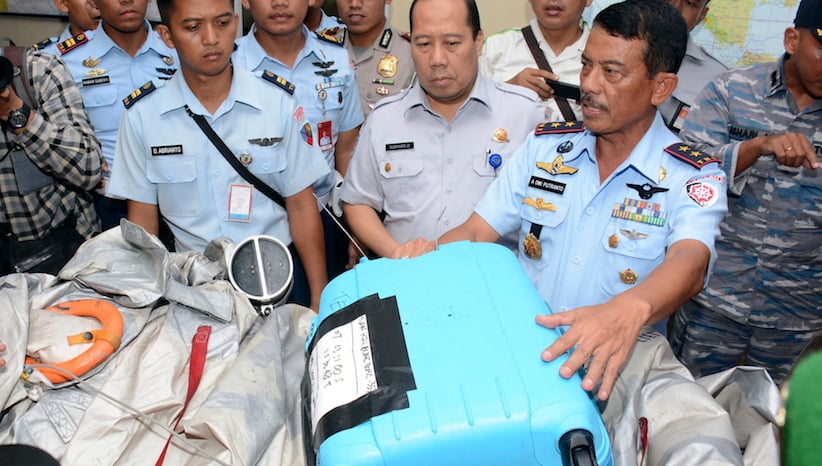 PANGKALAN BUN, Indonesia – Bloated bodies and debris seen floating in Indonesian waters Tuesday painfully ended the mystery of AirAsia Flight 8501, which crashed into the Java Sea with 162 people aboard and took more than two days to find, despite a massive international search.

The low-cost carrier vanished Sunday halfway through a two-hour flight between Surabaya, Indonesia and Singapore after encountering storm clouds.

On Tuesday, with crews in dozens of planes, helicopters and ships looking for the aircraft, searchers discovered what appeared to be a life jacket and an emergency exit door. Part of the plane’s interior, including an oxygen tank, was brought to the nearest town, Pangkalan Bun, along with a bright blue plastic suitcase that appeared to be in perfect condition.

First Adm. Sigit Setiayanta, Naval Aviation Center commander at Surabaya Air Force base, told reporters six corpses were spotted off Borneo island and about 16 kilometres from the plane’s last known co-ordinates. The bodies and wreckage were found about 160 kilometres from land.

Rescue workers were shown on local TV being lowered on ropes from a hovering helicopter to retrieve bodies. Efforts were hindered by 2-meter-high (6-foot) waves and strong winds, National Search and Rescue Director SB Supriyadi said, adding that several bodies were later picked up by a navy ship.

Supriyadi said he saw what appeared to be more wreckage under the water, which was clear and a relatively shallow 20 to 30 metres (65 to 100 feet).

Indonesian television showed a half-naked body of a man whose shirt partially covered his head. The images sent a spasm of pain through family members watching together in a waiting room at the Surabaya airport.

Many screamed and wailed uncontrollably, breaking down into tears while they squeezed each other. One middle-aged man collapsed and had to be carried out on a stretcher.

AirAsia group CEO Tony Fernandes tweeted, “My heart is filled with sadness for all the families involved in QZ 8501. On behalf of AirAsia my condolences to all. Words cannot express how sorry I am.” By evening he had flown back to Surabaya to meet passengers’ families.

Pilots of the jet had been worried about the weather on Sunday and sought permission to climb above threatening clouds, but were denied due to heavy air traffic. Minutes later, the jet was gone from the radar without issuing a distress signal.

Ifan Joko, 54, said that despite the tragic news he is still hoping for a miracle. His brother, Charlie Gunawan, along with his wife, their three children and two other family members, were travelling to Singapore on the plane to ring in the New Year.

“I know the plane has crashed, but I cannot believe my brother and his family are dead,” he said, wiping a tear. “… We still pray they are alive.”

Several countries are helping Indonesia retrieve the wreckage and the passengers.

The United States on Tuesday announced it was sending the USS Sampson destroyer, joining at least 30 ships, 15 aircraft and seven helicopters in the search for the jet, said Indonesia’s Search and Rescue Agency chief Henry Bambang Soelistyo.

A Chinese frigate was also on the way, while Singapore said it was sending two underwater beacon detectors to try to detect pings from the plane’s all-important cockpit voice and flight data recorders. Malaysia, Australia and Thailand also are involved in the search.