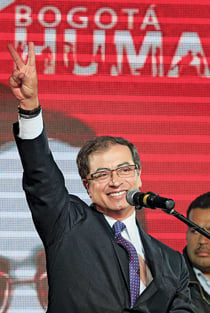 Few events are recalled more bitterly by Colombians. In early November 1985, the left-wing guerrilla group M-19 stormed the Supreme Court building in Bogotá’s city centre. Ninety-five people were killed after a 48-hour siege, a merciless military response and a massive fire, leaving 11 of the country’s 24 supreme court justices and all the M-19 rebels dead.

Gustavo Petro, then an M-19 guerilla and, since January, the mayor of Bogotá, was not part of the attack. He was in prison. That guerilla past made his election last October surprising. Yet it isn’t the first time the 51-year-old, an intelligent, calculating politician with an uneasy smile, has held office.

Álvaro Uribe, Colombia’s president until 2010, once called him a “guerilla in civilian clothes.” But for the last 16 years, Petro has been better known as a feisty congressman, first as a member of the M-19’s now-defunct political arm, and later with Colombia’s left-wing Independent Democratic Pole (PDI).

The outspoken ex-rebel gained notoriety for denouncing corruption. His detailed exposé into the growing political power of right-wing paramilitary groups, which triggered dozens of criminal investigations, earned him both praise and powerful enemies: more than 60 lawmakers are now in jail or facing charges for colluding with Colombia’s death squads.

In 2010, Petro accused then Bogotá mayor Samuel Moreno, a fellow PDI member, of accepting kickbacks from powerful contractors, a move which ended Moreno’s political career: last year, a court found he and his brother Iván, a congressman, guilty of corruption. Last fall, Petro, positioning himself as an anti-corruption hero, left the PDI and ran for the mayoralty.

The next four years, however, won’t be easy. The mayor, who captured just 32 per cent of the vote, has a weak mandate and few allies on city council; perhaps worse, he is distrusted by the media establishment. Petro, unlike most of Colombia’s ruling class, is not a son of the elite. He was born in Ciénaga de Oro, a small town near the Caribbean coast, to impoverished farmers, and was raised in a mud hut. A straight-A student, he attended a Jesuit school in Zipaquirá, north of Bogotá, where he tested his rebellious streak by defying priests. He made it known that Gabriel García Márquez, who would later win the Nobel prize for literature, had attended the school, something the priests kept hidden, since García Márquez was a communist. When, at 17, he joined the M-19, Petro chose the nom de guerre “Aureliano,” in honour of the patriarch from One Hundred Years of Solitude.

Though critics point to his guerilla past, Petro was “mostly an organizer,” never a combatant, and played a “key role in dismantling the group,” says one former M-19 member, who spoke on condition of anonymity.

Critics also point to Petro’s tendency to see corruption and criminal cartels everywhere as a sign of budding paranoia. But not all of this is a product of his imagination. And Bogotá can count on one thing: no one wants to succeed more than Petro himself. The mayoralty is just a step towards a bigger prize, he admits: the presidency of Colombia.