Bob Geldof and Bono have changed perceptions about aid in Africa for the better. So why are they relaunching BandAid? 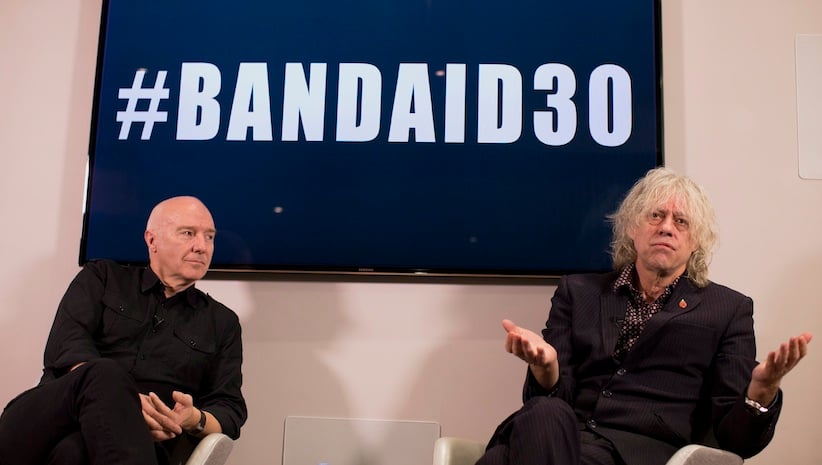 In 1984, Irish singer Bob Geldof, horrified at the famine in Ethiopia, responded by organizing two score of musicians to ask the question: “Do they know it’s Christmas?”

The answer was that Africa was Christianized 500 years before Europe, so yes, they had a pretty good idea.

This week, Geldof and Bono re-launched BandAid to support the fight against Ebola. Much has changed in the intervening 30 years, and the philanthropic effort is not being met with as much approval this time around.

It would seem hard to criticize the motivation or the results of BandAid. The original song and ensuing concerts generated more than US$150 million for famine relief. It raised awareness about the brutal famine that was then withering the Horn of Africa. In the opinion of many, it sparked a new era of charitable empathy among the Western public.

Africans, however, were not as grateful as Geldof perhaps expected. The lyrics of the song were derided as misleading and unhelpful. For example, “Where the only water flowing is the bitter sting of tears” inexplicably overlooked some of the greatest rivers on Earth, such as the Nile and the Congo. Worse, the song described Africa as “a world of dread and fear”—reinforcing a persistent stereotype that the continent is destitute, war-torn, and can only be redeemed by the benevolent grace of Boy George and Duran Duran. This misperception has continued to dog Africa and handicap its integration into a globalized world.

Others were critical of the dilettantish paternalism and condescension of the song, strikingly similar to attitudes that permeate the aid industry. There is a pervasive belief dating back to the colonial era that the developed world can save Africa through empathy and charity. Self-anointed “whites in shining armor,” such as Bono and Geldof, have monopolized a debate that has focused on what the West can or should do, and not on what Africans themselves wanted or needed.

This debate continues to exclude Africans. At development summits, often the only role they are given is to provide inspirational drumming after a white philanthropist describes his life-changing visit to a Kibera orphanage, 20 minutes from the Nairboi Fairmont.

The new edition of BandAid isn’t very inclusive, either. Only one of the singers is from Africa, which is disappointing, given the energetic music scenes in thriving cities such as Dakar, Lagos and Johannesburg. In fact, African musicians have already released two very popular ensemble singles to raise awareness and money for Ebola. None of them was invited to join BandAid.

Critics are also pointing out that BandAid is not being very transparent on how it will help. The polished website has ample information on how to give money, but nothing on where it will go or how it will be used.

More broadly, it was a surprise to see Geldof and Bono re-launch the BandAid effort. Both philanthropists have continued to work tirelessly to help Africa, and their approach has evolved significantly over the years. Each of them moved away from the charitable model and embraced the view that trade and investment were more powerful tools to end poverty.

Geldof has raised hundreds of millions for his Africa-focused 8 Mile private equity fund. He is a regular (and persuasive) speaker at global investment conferences, where he preaches that investors can make money and make a difference by betting on African businesses.

In public and in private, Bono is similarly passionate about the need to help Africans to help themselves through finance and investment. He personally lobbies billionaires to put their money into African industries. In particular, he supports the role of local entrepreneurs, saying “job creators and innovators are the key, and aid is just a bridge.” Like Geldof, Bono is a significant investor himself, most notably, with his ethical clothing company, Edun Apparel.

Together, the two Irish singers have been powerful catalysts, changing attitudes about Africa, and redefining the misleading stereotypes that they themselves helped to create 30 years earlier.

So why would they now return to the simplistic messages and problematic approach of BandAid? It’s hard to say. Geldof was asked about the criticism on a TV interview, and he simply responded by swearing until they cut off the live feed.

So, should you be buying copies of BandAid30 for stocking stuffers? If your goal is to help Africa and, specifically, those fighting Ebola, then the answer is no. Just give directly to Médecine Sans Frontières or Last Mile Health and cut out the middleman. But, if you really want to hear One Direction croon on about the “clanging chimes of doom,” then this is the song for you.