Boris Johnson on Brexit results: 'We can find our voice'

For the record: Here's what Boris Johnson said in the wake of the Brexit vote 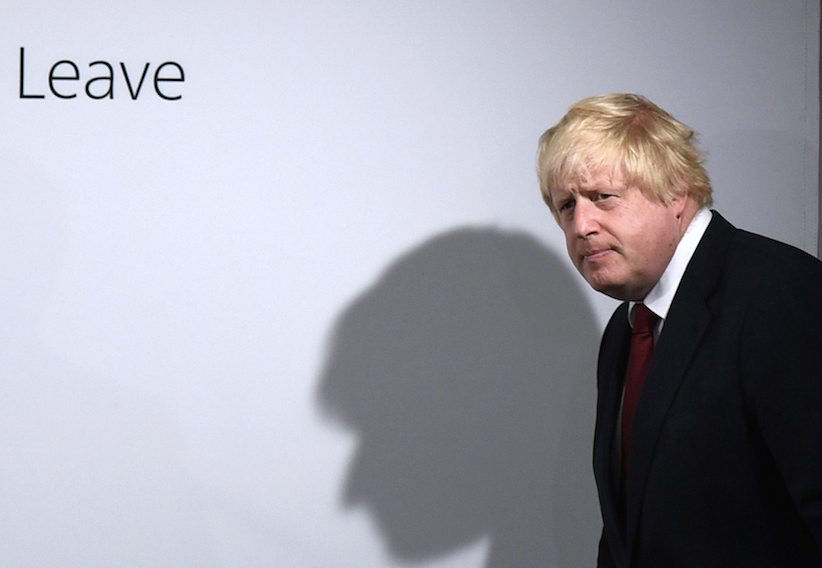 Britain has voted to exit the European Union. For the record, here’s what former London Mayor Boris Johnson had to say after the ‘Leave’ side victory:

I want to begin by paying tribute to David Cameron who has spoken earlier from Downing Street, and I know I speak for Michael [Gove] when I say how sad I am that he has decided to step down but obviously I respect that decision. I have known David Cameron for a very long time, and I believe he has been one of the most extraordinary politicians of our age. A brave and principled man, who has given superb leadership of his party and his country for many years.

David Cameron, for the record: ‘In these islands, we trust the people’

Today I think all of us politicians need to thank the British people for the way they have been doing our job for us. They hire us to deal with the hard questions and this year we gave them one of the biggest and toughest questions of all.

Some people are now saying that was wrong and that people should never have been asked in that way. I disagree, it was entirely right and inevitable and there is no way of dealing with a decision on this scale except by putting it to the people.

Because in the end this decision is about the people, the right of people in this country to settle their own destiny. The very principles of our democracy, the rights of all of us to elect and remove the people who make the key decisions in their lives. And I think that the electorate have searched in their hearts and answered as best they can in a poll the scale the like of which we have never seen before in this country. They have decided it is time to vote to take back control from a EU that has become too opaque and not accountable enough to the people it is meant to serve.

In voting to leave the EU, it is vital to stress there is no need for haste, and as the prime minister has said, nothing will change in the short-term except how to give effect to the will of the people and to extracate this country from the supranational system. There is no need to invoke Article 50.

And to those who may be anxious both at home and abroad, this does not mean that the United Kingdom will be in anyway less united, it does not mean it will be any less European. I want to speak directly to the millions of people who did not vote for this outcome, especially young people who may feel that this decision involves somehow pulling up the drawbridge because I think the very opposite is true.

Nicola Sturgeon, for the record: ‘We do not want to leave the EU’

We cannot turn our backs on Europe. We are part of Europe, our children and our grandchildren will continue to have a wonderful future as Europeans, travelling to the continent, understanding the languages and the cultures that make up our common European civilisation, continuing to interact with the peoples of other countries in a way that is open and friendly and outward-looking. And I want to reassure everyone Britain will continue to be a great European power, leading discussions on defence and foreign policy and the work that goes on to make our world safer.

But there is simply no need in the 21st century to be part of a federal government in Brussels that is imitated nowhere else on Earth. It was a noble idea for its time but it is no longer right for this country. It is the essence of our case that young people in this country can look forward to a more secure and more prosperous future, if we take back the democratic control which is the foundation of our economic prosperity. We have a glorious opportunity, to pass our laws and set our taxes entirely according to the needs of the U.K., we can control our borders in a way that is not discriminatory but fair and balanced and take the wind out of the sails of the extremists and those who would play politics with immigration.

Above all we can find our voice in the world again, a voice commensurate with the fifth-biggest economy on earth. Powerful, liberal, humane, an extraordinary force for good in the world. The most precious thing this country has given the world is the idea of parliamentary democracy. Yesterday [Thursday], I believe the British people have spoken up for democracy in Britain and across Europe and we can be proud of the result.

FILED UNDER: boris johnson Brexit FOR THE RECORD