If it comes down to personality, Boris Johnson has Ken Livingstone beat 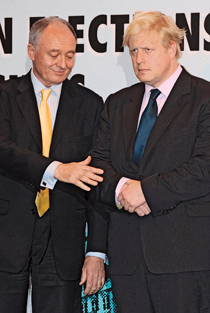 During the closing ceremonies of the 2008 Beijing Olympics, London Mayor Boris Johnson stood somewhere off-camera and prepared for his moment in the spotlight, when the Olympic flag would be thrust in his hands to be waved in front of some 90,000 people in the stadium, and another 1.5 billion watching on televisions around the world.

Before he could stride into view, two Chinese officials jabbed their fingers at his ample stomach and told him to button up his jacket.

“I instinctively reached for my middle button, and then thought, sod it,” he later recalled. “I was going to do it my way, and on the matter of jacket buttons I was going to follow a policy of openness, transparency and individual freedom.”

So “Boris” (nobody refers to him by his family name) appeared before a quarter of the world’s population as he usually does: looking like an overgrown schoolboy who hasn’t quite got the hang of wearing his uniform. Some Chinese media were offended, but he seemed relaxed and exuberant, a little like London itself.

This incident reveals two things about Johnson, who is now running for re-election in a May 3 vote: one, he fully expects to be mayor when the Olympics come to London later this summer; and two, he doesn’t much care whom he offends. That quality—along with his apparent bumbling good nature, if not his skill in governing one of the largest and most dynamic cities in the world—have made Johnson, a Conservative, the presumed favourite in a contest that pits him against Labour Party rival Ken Livingstone—dubbed “Red Ken” by his detractors—who preceded him as mayor for two terms.

In theory, the political climate in Britain should favour “Ken” (another first-namer). The public, and especially Londoners, have soured on the Conservative-led national coalition government. But Johnson consistently polls ahead of his party, while Livingstone is less liked in London than Labour.

“It is really down to personality,” says Sonia Purnell, a journalist and author of Just Boris: A Tale of Blond Ambition. On that count, Johnson has Livingstone beat. “There’s a real Brit obsession with wit,” says Purnell. “You can get away with an awful lot in this country if you’re funny about it, if you’re self-deprecating. And he’s both. He’s managed to go on convincing people that he’s one of them, that he’s authentic, that he’s not really a politician at all. People see him as different from the same old politicians—bland and untrustworthy and just out for themselves. They feel Boris is different from all that.”

Whether he is everything he seems to be is another story. Purnell worked with Johnson 20 years ago when they were both correspondents in Brussels for the Daily Telegraph newspaper and got to know him well. “Behind this shambling, charming, funny act, it was pretty clear he was incredibly focused, incredibly ambitious, and really quite ruthless,” she says. “That charm, that shambling, was a way of disarming people. Because the British don’t like someone who is gritty and thrusting and appears to be gritty and thrusting.”

Johnson manages to make even selfish ambition seem flattering. Most people believe he loathes Prime Minister David Cameron, a former classmate and fellow member of a secret drinking club at Oxford, and wants his job. But the two make a show of getting along in public. “I’m backing David Cameron’s campaign out of pure, cynical self-interest,” Johnson once boasted. Cameron is now supporting Johnson’s campaign for exactly the same reason—though, unlike Johnson, he’s not so forthright.

“If Boris lost, he would be back in Parliament, and then he would be a real problem for Cameron,” says Andrew Gilligan, the London editor of the Daily Telegraph and Sunday Telegraph newspapers. If David Cameron were to fail to win a majority during his second attempt in national elections due in 2015, some members of his caucus would start looking for a replacement. Johnson, arguably the most popular Conservative politician in Britain, would be an obvious candidate.

“For Cameron, keeping Johnson at city hall is probably a safer place,” says Tony Travers, a local government specialist at the London School of Economics.

The political fortunes of Labour Party leader Ed Miliband are also entwined with those of Livingstone, but in different ways. Nobody expects Livingstone to challenge Miliband for the party leadership. At 66, this may be his final campaign. But the London election is still seen as a test of Labour’s strength in Britain.

It’s also seen as a test of Miliband’s efforts to reshape the party. Miliband won its leadership by campaigning against the centrist policies of Tony Blair, in favour of a return to Labour’s left-leaning roots. Livingstone is of a similar ideological bent.

“Ken Livingstone represents a sort of centre-left body of opinion in the party, which Ed Miliband has become increasingly reliant on as he himself has attempted to shift the centre of gravity of the party to the left,” says Dan Hodges, a Labour commentator.

“If Ken were to lose the mayoralty, that would be a serious blow to Miliband.” Hodges, a self-described Blairite, says he’s not alone among Labour supporters who can’t bring themselves to cast a ballot for Livingstone.

“What’s distinguished this campaign is that quite a number of commentators and ordinary activists and party workers who in the past have kept quiet about their concerns in relation to Ken have regarded this campaign as something of a tipping point.”

Hodges points to recent revelations that show Livingstone channelled some of his earnings through a private company, which allowed him to benefit from a lower tax rate and save tens of thousands of dollars. He’d previously condemned those who engage in tax-avoidance schemes as “rich bastards” who should not be allowed to vote.

Then, last week, Livingstone cried while watching his own campaign video—so distressed, he said, by the potential plight of Londoners should Johnson win the election. It turns out the people on the video were reading from a script, and Livingstone had already seen the ad. He looked like a phony. Livingstone may still pull off an upset. The latest poll shows him within striking distance, six points back from the incumbent. But momentum is with Johnson. He’ll almost certainly be the one hoisting the Olympic flag in London this summer, dressed however he pleases.