The former president said political hatred had put in Brazil "into the same climate as Venezuela''. 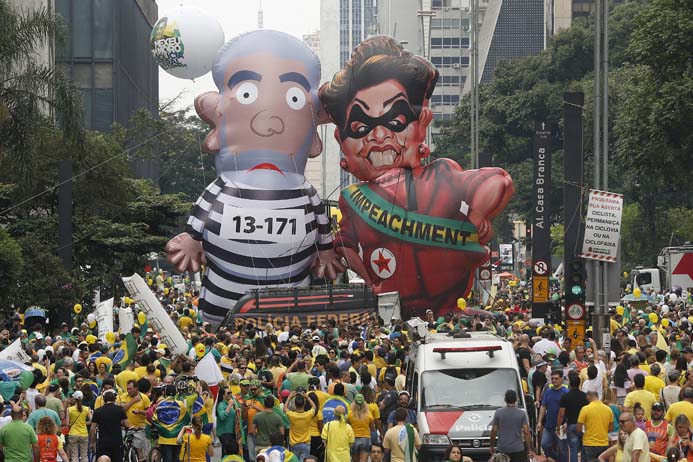 Silva told international journalists that President Dilma Rousseff will be able to resist even if leaders of a major ally, the Brazilian Democratic Movement Party, announce its members are leaving her governing coalition as expected Tuesday. Both Silva and Rousseff belong to the Workers Party.

Rousseff recently appointed Silva as her chief of staff in a much-discussed move that still must be confirmed by Brazil’s top court.

Silva said he will ask Democratic Movement’s president and the country’s vice-president, Michel Temer, who is a member of Democratic Movement, to help Rousseff keep her job despite the plunge in her popularity amid Brazil’s worst recession in decades and corruption scandals.

“No one likes to support an administration that is not doing well with public opinion,” Silva said. “But we need to keep talking to” the Democratic Movement.

If Rousseff was impeached for breaking fiscal laws, Temer would assume the presidency.

Tourism Minister Henrique Alves, a member of the Democratic Movement, submitted his resignation late Tuesday. Alves, a Temer ally, said he was following the “greatest challenge” faced by his party, which is led by Temer.

“The dialogue, I’m afraid to admit, has exhausted,” he said in a letter to Rousseff.

A recent poll by the respected Datafolha institute said 68 per cent of Brazilians favour Rousseff’s impeachment, but only 11 per cent believe they would be better off under Temer.

Silva again denied the claims that he joined Rousseff’s government to avoid arrest on corruption charges. After Rousseff named him chief of staff two weeks ago, a legal move stopped Silva from taking the post, which would protect him from any prosecution except in the country’s top court. The court is expected to make a final decision next week.

The former president said political hatred had put in Brazil “into the same climate as Venezuela” and compared attempts to remove Rousseff to the 2012 ouster of Paraguayan President Fernando Lugo.

“An impeachment without legal basis is a coup,” he said. “These are excuses and fake arguments to shorten the term of the person who won the elections.”

Impeachment proceedings against Rousseff are based on a government watchdog’s rejection of her administration’s financial books in her first term and on another report by that same body suggesting that violations of Brazil’s fiscal laws continued last year.

The Brazilian Bar Association filed a complaint Monday with the Congress adding new reasons for impeaching Rousseff. It accused her of obstructing justice in Brazil’s corruption investigations and criticized her for granting international soccer governing body FIFA tax exempt status during the World Cup hosted by Brazil in 2014.

Rousseff sympathizers tried to block access to the lower house of Congress to prevent delivery of the complaint and clashed with lawyers from the bar association.

“The Brazilian Bar Association is pointing out the accounting tricks, the tax breaks in favour of FIFA and the intention to benefit an ally, despite the judicial investigations, granting him the privileges of a State minister,” the lawyer group said in a statement.

Government supporters have pledged to protest if Rousseff is impeached, but business leaders have said her departure would restore confidence in Brazil’s troubled economy.

After Silva’s news conference, Humberto Costa, leader of the Workers Party in the Senate, gave a speech saying that if the president is removed, Temer “will be the next to fall.”

The documents allegedly show payments to nearly 300 politicians from dozens of parties. They were seized last month from the Rio de Janeiro residence of an executive of the Odebrecht construction firm, which prosecutors say was paying bribes for inflated Petrobras contracts.

In another twist in the scandal, the Globo television network on Sunday broadcast an interview with a former Odebrecht employee who claims to have distributed bribes to politicians as far back as the 1980s. The former secretary with Odebrecht’s finance division said she gave police a list of some 500 recipients of bribes from the late 1980s.

Neither Odebrecht nor the federal police responded to emailed requests for comment on the secretary’s statements.