It will be a Brexit: Britain votes in favour of leaving EU 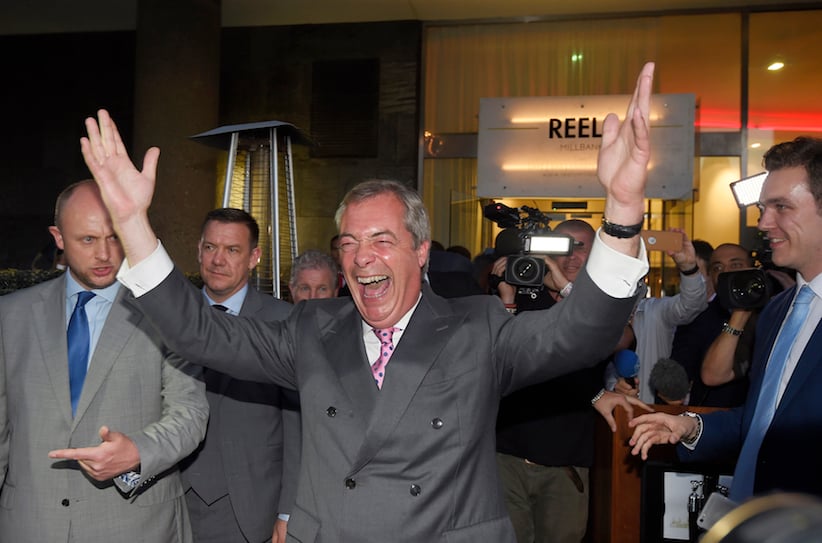 Nigel Farage, the leader of the United Kingdom Independence Party (UKIP), reacts at a Leave.eu party after polling stations closed in the Referendum on the European Union in London, Britain, June 24, 2016. (Reuters)

LONDON — Britain voted to leave the European Union after a bitterly divisive referendum campaign, toppling the government Friday, sending global markets plunging and shattering the stability of a project in continental unity designed half a century ago to prevent World War III.

The decision launches a yearslong process to renegotiate trade, business and political links between the United Kingdom and what would become a 27-nation bloc, an unprecedented divorce that could take decades to complete.

“The dawn is breaking on an independent United Kingdom,” said Nigel Farage, leader of the U.K. Independence Party. “Let June 23 go down in our history as our independence day!”

Prime Minister David Cameron, who had led the campaign to keep Britain in the EU, said he would resign by October and left it to his successor to decide when to invoke Article 50, which triggers a departure from European Union.

“I will do everything I can as prime minister to steady the ship over the coming weeks and months,” he said, “but I do not think it would be right for me to try to be the captain that steers the country to its next destination.”

The electoral commission said 52 per cent of voters opted to leave the EU. Turnout was high: 72 per cent of the more than 46 million registered voters cast ballots.

Polls ahead of the vote had shown a close race, but the momentum had increasingly appeared to be on the “remain” side over the last week. The result shocked investors, and stock markets plummeted around the world, with key indexes dropping 10 per cent in Germany and about 8 per cent in Japan and Britain.

The euro fell against the dollar and the pound dropped to its lowest level since 1985, plunging more than 10 per cent from about $1.50 to $1.35 before a slight recovery, on concerns that severing ties with the single market will hurt the U.K. economy and undermine London’s position as a global financial centre. Bank of England Gov. Mark Carney sought to reassure the markets.

“We are well prepared for this,” Carney said. “The Treasury and the Bank of England have engaged in extensive contingency planning. … We have taken all the necessary steps to prepare for today’s events.”

Also seeking to calm frayed nerves was the most prominent “leave” campaigner, Boris Johnson. Taking a sombre tone unusual for the flamboyant former London mayor, he said the result in no way meant the United Kingdom would be “less united” or “less European.”

Even as he spoke, however, Scotland’s First Minister Nicola Sturgeon said a second Scottish referendum on independence from the United Kingdom “has to be on the table.” Scotland voted in 2014 to remain a part of the U.K. but leaders said afterward that was conditional on Britain remaining in the EU.

The U.K. would be the first major country to leave the EU, which was born from the ashes of World War II as European leaders sought to build links and avert future hostility. With no precedent, the impact on the single market of 500 million people _ the world’s largest economy _ is unclear.

Leaders from across the EU voiced regret at the British decision. Germany called top diplomats from the EU’s six founding nations to a meeting Saturday, and the president of the European Council, Donald Tusk, said the bloc will meet without Britain at a summit next week to assess its future. Tusk vowed not to let the vote derail the European project.

“What doesn’t kill you, makes you stronger,” he said.

But already, far-right leaders in France and the Netherlands were calling for a similar anti-EU vote. 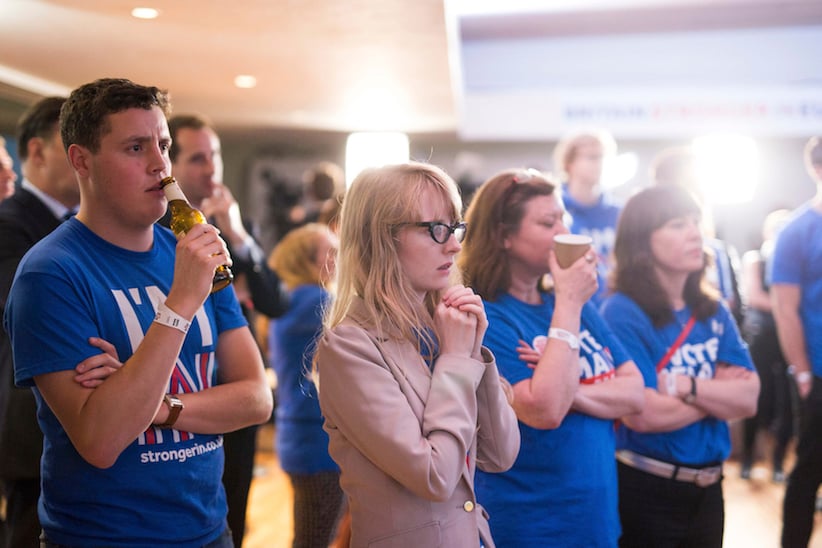 Supporters of the Stronger In Campaign react as results of the EU referendum are announced at the Royal Festival Hall, in London, Britain June 24, 2016. (Reuters)

The referendum showed Britain to be a sharply divided nation: Strong pro-EU votes in the economic and cultural powerhouse of London and semi-autonomous Scotland were countered by sweeping anti-Establishment sentiment for an exit across the rest of England, from southern seaside towns to rust-belt former industrial powerhouses in the north.

“It’s a vindication of 1,000 years of British democracy,” commuter Jonathan Campbell James declared at the train station in Richmond, southwest London. “From Magna Carta all the way through to now we’ve had a slow evolution of democracy, and this vote has vindicated the maturity and depth of the democracy in our country.”

“Good luck to all of us, I say, especially those trying to build a future with our children,” she said.

Cameron called the referendum largely to silence voices to his right, then staked his reputation on keeping Britain in the EU. Former London Mayor Boris Johnson, who is from the same party, was the most prominent supporter of the “leave” campaign and now becomes a leading contender to replace Cameron. The vote also dealt a blow to the main opposition Labour Party, which threw its weight behind the “remain” campaign.

“A lot of people’s grievances are coming out and we have got to start listening to them,” said deputy Labour Party leader John McDonnell.

Indeed, the vote constituted a rebellion against the political, economic and social Establishment. All manner of groups _ CEOs, scientists, soldiers _ had written open letters warning of the consequences of an exit. Farage called the result “a victory for ordinary people against the big banks, big business and big politics.”

Donald Trump praised the decision during a visit to one of his golf courses in Scotland, saying Britons “took back their country. It’s a great thing.” He likened the vote to the U.S. sentiment that has propelled him to the presumptive Republican presidential nominee, saying people in the United States and the United Kingdom are angry about similar things.

“People are angry all over the world,” he said.

After winning a majority in Parliament in the last election, Cameron negotiated a package of reforms that he said would protect Britain’s sovereignty and prevent EU migrants from moving to the U.K. to claim generous public benefits.

Critics charged that those reforms were hollow, leaving Britain at the mercy of bureaucrats in Brussels and doing nothing to stem the tide of European immigrants who have come to the U.K. since the EU expanded eastward in 2004. The “leave” campaign accuses the immigrants of taxing Britain’s housing market, public services and employment rolls.

Those concerns were magnified by the refugee crisis of the past year that saw more than 1 million people from the Middle East and Africa flood into the EU as the continent’s leaders struggled to come up with a unified response.

Cameron’s efforts to find a slogan to counter the “leave” campaign’s emotive “take back control” settled on “Brits don’t quit.” But the appeal to a Churchillian bulldog spirit and stoicism proved too little, too late.

The slaying of pro-Europe lawmaker Jo Cox a week before the vote brought a shocked pause to both campaigns and appeared to shift momentum away from the “leave” camp. While it isn’t clear whether her killer was influenced by the EU debate, her death aroused fears that the referendum had stirred demons it would be difficult to subdue.

The result triggers a new series of negotiations that is expected to last two years or more as Britain and the EU search for a way to separate economies that have become intertwined since the U.K. joined the bloc on Jan. 1, 1973. Until those talks are completed, Britain will remain a member of the EU.

Exiting the EU involves taking the unprecedented step of invoking Article 50 of the EU’s governing treaty. While Greenland left an earlier, more limited version of the bloc in 1985, no country has ever invoked Article 50, so there is no roadmap for how the process will work.

Authorities ranging from the International Monetary Fund to the U.S. Federal Reserve and the Bank of England have warned that a British exit will reverberate through a world economy that is only slowly recovering from the global economic crisis. The European Union is the world’s biggest economy and the U.K.’s most important trading partner, accounting for 45 per cent of exports and 53 per cent of imports.

In addition, the complex nature of Britain’s integration with the EU means that breaking up will be hard to do. The negotiations will go far beyond tariffs, including issues such as cross-border security, foreign policy co-operation and a common fisheries policy.

It will also affect the ability of professionals such as investment managers, accountants and lawyers to work in the EU, threatening London’s position as one of the world’s pre-eminent financial centres. The U.K. hosts more headquarters of non-EU firms than Germany, France, Switzerland and the Netherlands put together.

“We believe this outcome has serious implications for the City and many of our clients’ businesses with exposure to the U.K. and the EU,” said Malcolm Sweeting, senior partner of law firm Clifford Chance. “We are working alongside our clients to help them as they anticipate, plan for and manage the challenges the coming political and trade negotiations will bring.”