Even the duchess of Cambridge must bend

She may be the crown jewel of the Windsor clan, but Kate still has to curtsy to William’s cousins 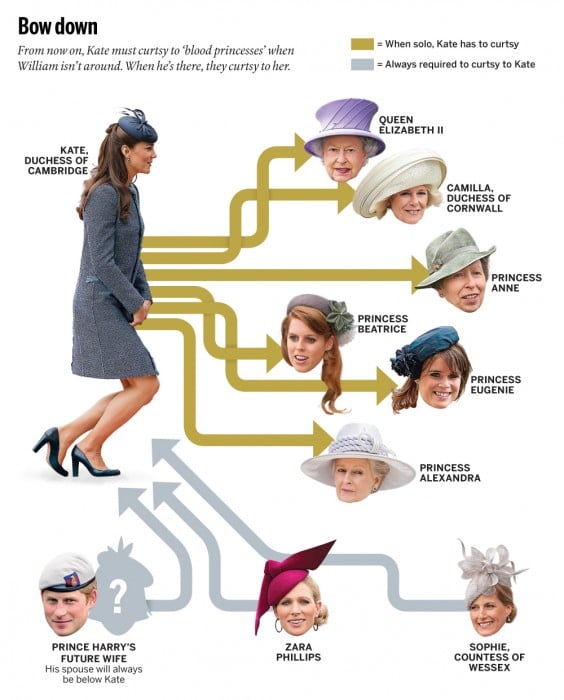 While her life may seem like a paradise of far-flung travels, generous clothing budgets and polo matches, Catherine, duchess of Cambridge, is still, in some circumstances, a second-tier royal.

Last week, the house of Windsor updated its official protocol; Kate, it stipulates, must now curtsy to “blood princesses” when Prince William, her husband, is not present (when they are together, she retains his status). While she may be a future queen consort, she was still born of common blood.

It all boils down to the so-called “order of precedence”—the royal ranking. There are in fact two rankings: one used when William and Kate are together, another when Kate is alone. The latter “places princesses who were born royal above those who were not,” explains Rafal Heydel-Mankoo, co-editor of Burke’s Peerage & Gentry.

According to the document, a William-less Kate is required to curtsy to Beatrice and Eugenie—the party-hardy twentysomething daughters of Prince Andrew and Sarah Ferguson—as well as Anne, Alexandra, a little-known royal, and even Camilla, Charles’s former mistress, who, as wife of the heir to the throne is ahead of Kate on the female pecking order.

While Windsor enthusiasts on both sides of the Atlantic may be surprised to learn that the duchess is afforded less status than the girls best known outside the royal family for wearing outlandish hats to her wedding, Heydel-Mankoo says that precedence is rarely followed by the younger royals, who interact much more casually than previous generations. “In private, the duchess of Cambridge, and all the family, would curtsy to the Queen, of course, and the duke of Edinburgh because he is the patriarch of the family, but you certainly won’t find younger royals curtsying to each other.”

Though precedence is still maintained at public events, there was a time when it was rigidly enforced even behind palace doors. In the ’50s, he says, the Queen’s cousin-in-law, the duchess of Kent, regularly curtsied to the Queen’s sister, Princess Margaret—“but Princess Margaret was a formidable woman,” he explains, “and very particular about these things.” Since then, the rules have become more flexible. Nowadays, you won’t see Alexandra, the Queen’s cousin, curtsying to Beatrice or Eugenie, he says—“that’s just not going to happen.”

Nor will Kate be relegated to a commoner’s place in the royal family. On the contrary, her high profile throughout the Diamond Jubilee is a testament to how serious the Queen is about the new royal’s place within the Windsor family. It’s clear, says Heydel-Mankoo, “that the duchess of Cambridge is about as close to the heart of the monarchy as it is possible to be.”