Britain's debate over leaving the EU becomes a soap opera 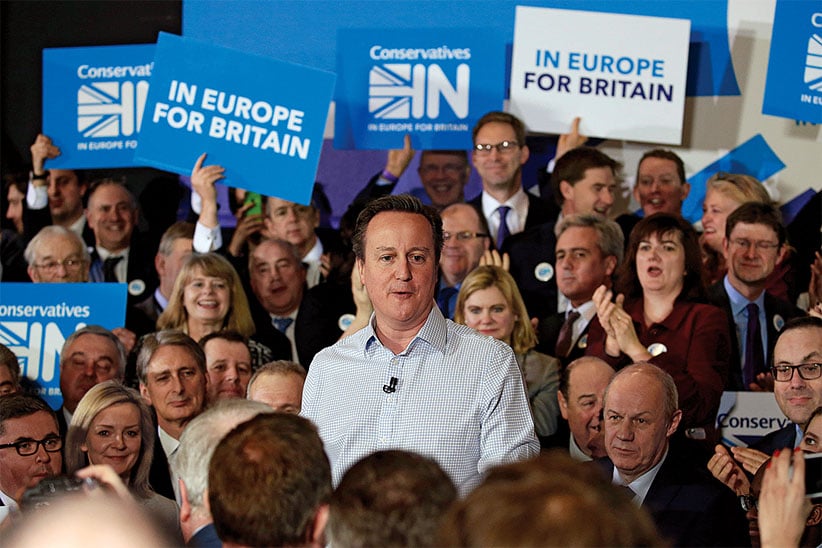 British Prime Minister David Cameron launches the Conservatives IN Campaign at the ICA on February 24, 2016 in London, England. David Cameron returned from Brussels at the weekend having secured a unanimous deal on Britain’s future in the EU and announced the In/Out referendum date as June 23rd 2016. (Alex B. Huckle/Getty)

Britain’s European Union membership referendum will take place in June and public debate—which has simmered within the ranks of the Conservative party ever since Britain joined the European Economic Community in 1973—is well under way. One might assume that coverage of the upcoming “neverendum” would be somewhat dry, given the colossal bureaucratic implications and economic complexity of the issue. Instead, it’s been a veritable soap opera, with three main characters emerging as power brokers and rivals. These men, like besuited would-be kings in an updated version of the bloody Tudor wars, are Justice Secretary Michael Gove, Prime Minister David Cameron and London Mayor (and MP) Boris Johnson.

The three men were at Oxford together in the 80s, and the latter two have known each other since their days at Eton, so in this case, history runs very deep indeed.

The Brexit drama began in earnest late last month, after Cameron announced a new deal had been struck on Britain’s EU membership after two days of intensive talks with other member state leaders in Brussels. While the deal included some changes to the way child benefit and welfare is dispensed to migrant workers, among other fairly minor points, the consensus was that it did little to substantially alter Britain’s position in the EU prior to the upcoming referendum. Euroskeptics went further, arguing that it fell well short of what Cameron originally promised during the last election, particularly when it comes to returning powers from Brussels.

After the announcement, the Tory party, which has long been painfully divided on the subject of Europe, set about dividing into official Brexit camps—for and against their prime minister. And while most members of Cameron’s inner circle and Cabinet predictably fell into line, two of his closest public allies startled the nation by going the opposite way.

Related: Should Britain stay, or should it go?

Gove, a close friend and adviser of the prime minister as well as godfather to Cameron’s youngest daughter, posted a lengthy explanation on Facebook as to why he would be sticking with his Euroskeptic principles and campaigning for Brexit. His wife, Sarah Vine, a Daily Mail columnist, subsequently published a piece describing her husband’s vacillation on the issue as “a nightmare” in which he behaved “like a cat on a hot tin roof, locked in an internal struggle of agonizing proportions.” She even wrote of how, in past social situations, when Cameron asked about her husband’s intentions on the issue, she played down Gove’s opposition to Brussels because “being frightfully middle-class about it all, I didn’t want to start a row.”

But for those who have followed Gove’s politics closely, his opposition to the EU will come as no surprise. What did startle, however, was his decision to desert Cameron in his hour of need—a decision that the prime minster is said to have taken very personally indeed. Many onlookers have speculated that Gove’s rebelliousness on this issue may well be born of his lingering bitterness at being sacked by his old friend as education secretary in 2014.

If Gove’s renegade stance hurt Cameron’s feelings, then Johnson following suit managed to boil his blood. After a long and agonizing weekend of letting the press speculate on his intentions, Johnson reportedly texted Cameron his decision then followed up with a seven-minute impromptu press conference on his Islington front stoop. The next day, the details of his Brexit stance were published in his Monday Telegraph column, but in PR terms, the die had already been cast. Johnson was branded a cynical careerist for choosing the “out” option, because to campaign to stay in and lose would be political death, whereas its opposite would not. Naturally he protested his was a position of pure political principle, but his old school chum Cameron was having none of it. In the speech to the Commons in which he unveiled his new EU deal, Cameron delivered a scathing attack on Johnson, accusing him of being a political opportunist with his eye on the party leadership while representing his own stance as lily-white. “I’m not standing for re-election,” he said. “I have no other agenda than what is best for our country. I’m standing here telling you what I think.”

Johnson, for his part, was defended by his sister, Rachel Johnson, a columnist for the Mail on Sunday, who recounted her story of visiting him at his country house in Oxfordshire as he played tennis, munched lasagna and agonized over which way to turn. “I warned him everyone would accuse him of betrayal, opportunism and grabbing the ball from the back of the scrum etc. if he went rogue on Dave,” she wrote. “I don’t give a stuff about that, or the leadership,” was his reply.

Did Johnson really say it? Quite possibly. But the notion that he means it seems far harder to believe. One thing is clear though: the lines have been drawn and the knives are out. Let the neverendum death match begin.