Johnson's appointment to foreign minister is raising eyebrows, due to his reputation for saying the wrong thing at the wrong time. 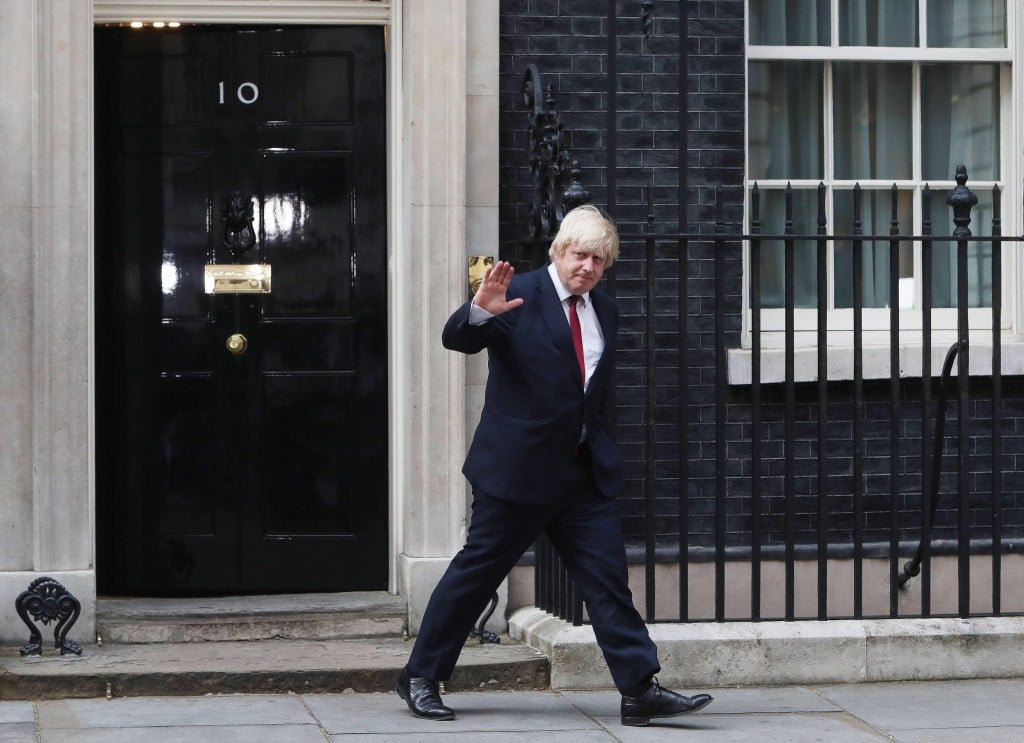 LONDON – He’s insulted everyone from the president of the United States to the people of Papua New Guinea. Now the remarkably undiplomatic Boris Johnson, his political career miraculously revived, has become Britain’s top diplomat.

The reaction to his surprise appointment as foreign secretary in British Prime Minister Theresa May’s new Conservative Cabinet has been swift and blunt: His French counterpart called him a liar, the Germans say he’s irresponsible, and a British legislator believes it’s the worst political appointment since Roman emperor Caligula made his horse a senator.

And those are Britain’s allies talking.

May came to power with a reputation for acting with careful calculation, but with her choice of the voluble, publicity-craving Johnson as Britain’s representative on the world stage, she appears to have thrown her customary caution to the winds.

Instead of choosing a team player, May chose a politician who prides himself on being different.

So different he insulted President Barack Obama by making fun of his ancestry. So tone deaf he also wrote an extremely vulgar limerick about Turkish President Recep Tayyip Erdogan, using debasing sexual imagery to mock the leader of a mostly Muslim country.

Johnson, 52, was a prominent leader of the successful “leave” campaign to take Britain out of the European Union who harboured his own leadership hopes, making him a factor for May to deal with as the new prime minister tries to unify the sharply divided Conservative Party.

But her decision to put Johnson on the world stage dealing with foreign leaders is raising questions, largely because of Johnson’s propensity for saying exactly wrong thing at the wrong time, sometimes in the most provocative way.

“Did you all see what his style was like through the campaign? He lied a lot to the British. Now, it’s him with his back against the wall to defend his country and to clarify his relationship with Europe,” Ayrault said.

The French minister said he needs a negotiating partner who is “clear, credible and reliable” for the upcoming negotiations on Britain’s stated desire to leave the 28-nation EU.

Others took a more conciliatory view with the belief that Johnson as foreign secretary would be more temperate than his previous incarnations as Johnson the journalist, Johnson the legislator or Johnson the London mayor.

Russian President Vladimir Putin seemed inclined to let bygones be bygones even though Johnson had described him as a “ruthless and manipulative tyrant” and suggested he looked like a Harry Potter character, the wizened elf Dobby.

“The burden of his current position will undoubtedly, certainly, lead him to use a bit different rhetoric, of a more diplomatic nature,” Putin spokesman Dmitry Peskov said Thursday. 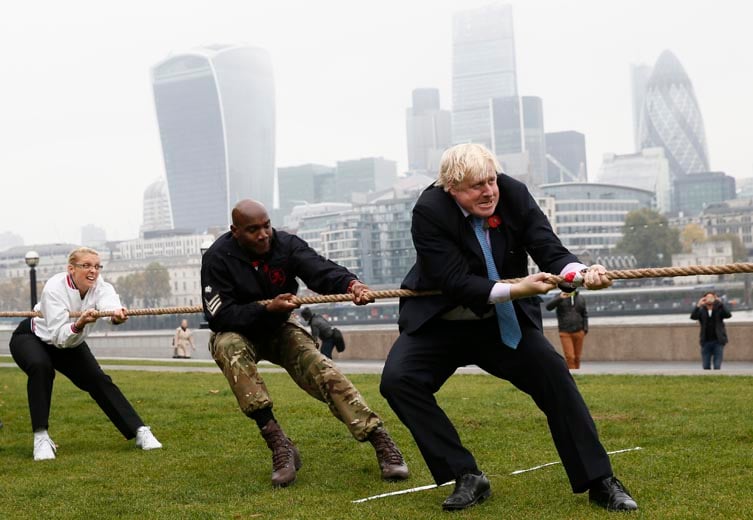 London Mayor Boris Johnson takes part in a tug of war with members of the armed services to launch the London Poppy Day, outside City Hall, in London, October 27, 2015. (Stefan Wermuth/Retuers)

When it comes to U.S. Democrats and Republicans, Johnson seems an equal opportunity offender.

There was no word from Hillary Clinton’s camp on whether she had forgiven his 2007 description of her as resembling “a sadistic nurse in a mental hospital.” And Donald Trump didn’t indicate his feelings about Johnson’s statement that he would avoid certain parts of New York City because of the “real risk of meeting Donald Trump.”

After Obama in April said he hoped that Britons would vote to stay in the EU, Johnson described America’s first black president as a “part-Kenyan” with an “ancestral dislike of the British empire.”

Many British commentators questioned the wisdom of insulting the leader of Britain’s most important ally.

As a newspaper columnist, Johnson used a derogatory term for black children when describing people in the Commonwealth and characterized people from Papua New Guinea as cannibals. While in Parliament, he offended an entire British city when he complained that people from Liverpool were wallowing in “victim status” after one of their own was taken hostage and slain in Iraq.

In a bizarre twist, Johnson has also offered unusual praise for Syrian leader Bashar Assad, calling him a vile dictator but hailing the success of his forces in beating back Islamic State extremists.

Johnson has apologized many times for a string of insensitive comments dating back to his early days in journalism, and he seems likely to do so again – he said after his surprise appointment that “the United States of America will be in the front of the queue” for his next apology.

His language was an apparent reference to Obama’s earlier warning that Britain would be in the back of the queue for those seeking trade agreements with the United States if it left the 28-nation EU.

When Johnson returned to his London home after the appointment, a neighbour placed a sign next to his house saying: “SORRY WORLD.”

Liberal Democrat leader Tim Farron said he could not believe Johnson will now represent Britain abroad. He said Johnson must first apologize to Obama and then apologize to EU leaders for saying their plans for Europe were similar to Adolf Hitler’s.

“At this incredibly important time that will determine Britain’s economic and cultural relations with Europe, it is extraordinary that the new prime minister has chosen someone whose career is built on making jokes,” Farron said.

The cheerful, extroverted Johnson has had some notable successes. He was seen as an effective cheerleader for London during his stint as mayor, a tenure that included the successful 2012 Summer Olympics. After the “leave” campaign scored a surprise victory in the June 23 referendum, he seemed well positioned to succeed David Cameron as prime minister.

But he was undercut by key ally Michael Gove, who pronounced Johnson unfit to serve and ran unsuccessfully for party leader himself. The treachery left Johnson out of the Conservative leadership race. In another seemingly political disaster, Johnson then announced he supported May’s challenger to become the next prime minister, not the home secretary herself.

May’s move _ bravery or folly, time will tell – means Johnson will be able to command TV news coverage with a series of foreign trips. But how he moulds his new job is anyone’s guess. Foreign secretaries in Britain have traditionally stayed in a supporting role, refraining from saying anything remotely off-the-cuff or contentious – but that may be a stretch too far for Johnson.

“I wish it was a joke but I fear it isn’t,” former Swedish Prime Minister Carl Bildt tweeted at the news of Johnson’s appointment.