Britain's 'out' campaigners mistrust the EU, and each other

With less than three months to go until a referendum, Britain's anti-EU campaigners are bitterly divided 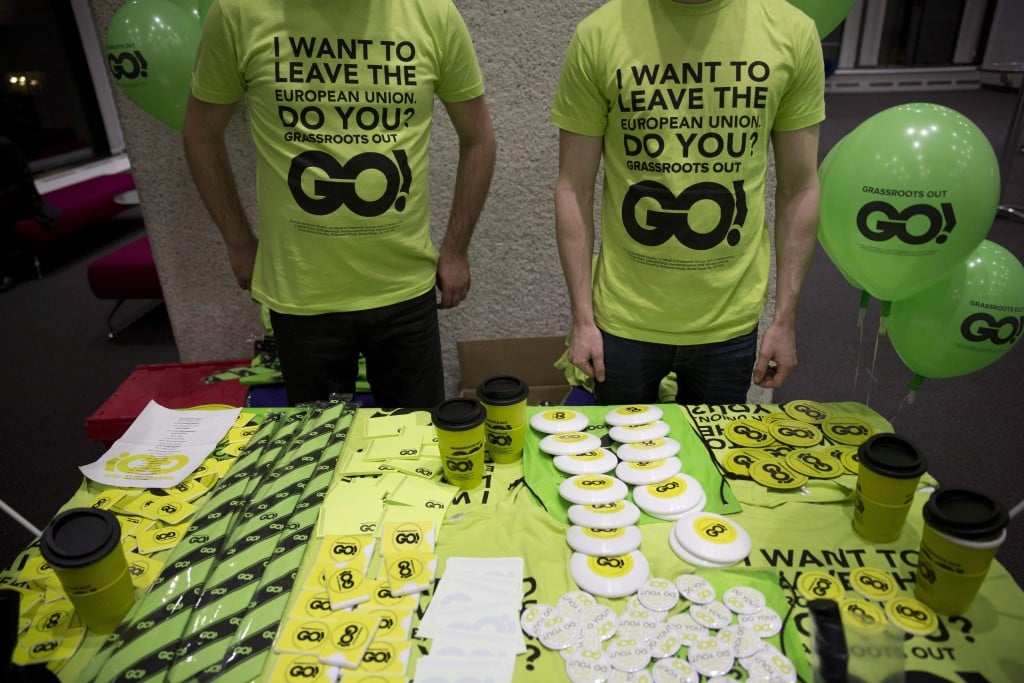 Men wear t-shirts by a merchandise stall before the start of a rally held by the Grassroots Out (GO), anti-EU campaign group, at the Queen Elizabeth II conference centre in London, held to coincide with the EU summit in Brussels, Friday, Feb. 19, 2016. (AP Photo/Matt Dunham)

LONDON – Tempers are flaring and insults are flying in Britain’s battle over the European Union. Leading campaigners have branded one another elitist, irrelevant and unfit to run a sweet shop – and they’re all on the same side.

With less than three months to go until a June 23 referendum, Britain’s anti-EU campaigners are bitterly divided, with two rival camps battling over which will be the standard-bearer in the campaign – and over how to win the historic vote.

Will voters make up their minds based on concerns about immigration and national sovereignty, or on worries about the value of the pound in their pocket? How to answer that question divides the two rival anti-EU groups, Grassroots Out and Vote Leave.

Oxley said Vote Leave recognizes that the campaign also needs to win an economic argument. “People need to be reassured that by voting to leave, their job is not being put at risk.”

Grassroots Out and Vote Leave are vying to become the official “leave” side in the referendum campaign, a designation that will be made by the Electoral Commission before April 15.

The chosen group will be able to spend up to 7 million pounds ($10 million) and will get free television broadcasts and a mail-out to households across the country.

On the pro-EU side, only one group is seeking the mantle: Britain Stronger in Europe. On the side arguing for a British exit – or Brexit – the two rival groups have been jostling and criticizing one another for months.

The more polished is Vote Leave, which has the support of many prominent Conservative Euroskeptics, including Cabinet minister Michael Gove and London Mayor Boris Johnson, as well as figures from other parties. It has slick branding and a professional media campaign that aims to persuade wavering moderates and young voters.

Its rival, Grassroots Out, paints itself as the down-to-earth alternative. It’s an umbrella group whose main component is Leave.EU, a well-funded group founded by Arron Banks, a brash multimillionaire backer of the anti-immigrant U.K. Independence Party.

Grassroots Out has focused on holding street stalls and local events up and down the country. Its highest-profile figure is UKIP leader Nigel Farage, a divisive politician who is loved by some and loathed by others for his blunt-spoken, British-as-a-bulldog image.

Farage built UKIP from fringe party into political force by stressing its anti-establishment credentials. He is taking the same approach to the referendum, painting Vote Leave as a bunch of out-of-touch political insiders.

“They are so much seen as the centre-right and so much seen as SW1 (the postal code for Parliament), and not actually out round the country doing the stuff we are doing,” he said recently.

Farage accused Vote Leave of seeing their rivals as “members of the lower orders and not really fit to sit round the same table as them.”

Banks has been even less complimentary, saying of Vote Leave’s organizers: “I wouldn’t put them in charge of the local sweet shop.”

The infighting has left the “leave” camp without a strong single figurehead to go up against Prime Minister David Cameron, the face of the “remain” campaign.

The best-known pro-Brexit figures are an almost comically diverse bunch, ranging from Farage on the hard right to wonkish Conservative politicians like Gove and House of Commons leader Chris Grayling to the bombastic left-wing former lawmaker George Galloway.

Steven Fielding, professor of political history at the University of Nottingham, said there was a perception that the anti-EU campaign is run by “oddballs.”

“These are not people who look as though they ought to be on ‘The One Show”’ – a popular suppertime TV talk show.

“The absence of a face is a difficulty these days, because all political communication has to go through a personality,” Fielding said.

The most famous Brexiteer by far is London’s bicycle-riding, tousle-headed mayor, one of the few politicians to have first-name recognition: Boris.

With his amiable-buffoon manner and Latin-quips, Johnson is widely popular and could potentially sway many voters. But he’s also a one-man band who has so far declined to share a stage with Farage and other campaigners. Critics accuse him of caring more about his own hopes of succeeding Cameron as prime minister than about the future of Britain.

Matthew Goodwin, a political scientist who studies Britain’s Euroskeptic movement, says the “the divisions on the ‘leave’ side, in a way, contain some hidden strengths.”

He said the “leave” camp can succeed, “provided they have the discipline and the organizational nous to target those two groups.”