Suggesting that Brexit and Trump are powered by same populism is 'lazy comparison,' says Howard Drake 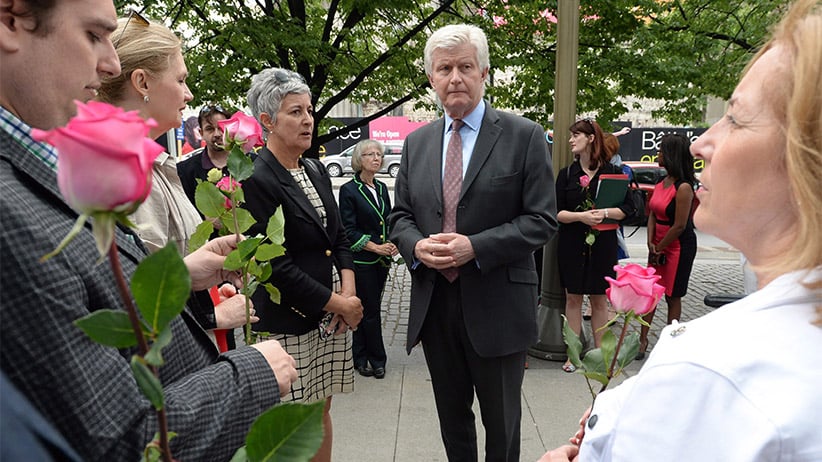 British High Commissioner to Canada Howard Drake, middle right, joins others as they take part in an event titled ‘More In Common: A Worldwide Celebration of Jo Cox’ at the British High Commission in Ottawa on Wednesday, June 22, 2016. Helen Joanne ‘Jo’ Cox was a British Member of Parliament who was murdered earlier this month. Sean Kilpatrick/CP

OTTAWA – Britain’s envoy to Canada says it is lazy to equate the rise of Donald Trump in the U.S. to his country’s controversial decision to leave the European Union.

High Commissioner Howard Drake said the British decision to stage a “Brexit” and leave the EU differs greatly from the so-called populist sentiment that propelled Trump to Washington and Friday’s presidential inauguration.

“They’re not the same thing,” Drake said Tuesday in an interview with The Canadian Press.

“Trump is about protectionism, protecting U.S. jobs, the U.S. market. We’re about being open to the world and trading with the world. We are an open country.”

He said he takes issue with numerous pundits and analysts equating Trump and Brexit under a generic brand of global populism.

“It is a lazy comparison. It’s wrong,” he said. “There are common elements, of course, but to just say it’s all populism, that missing a lot of it.”

Earlier Tuesday, British Prime Minister Theresa May laid out the terms of Britain’s departure from the EU in a long-anticipated speech that affirms a clear break with the European Union while keeping Britain a “great global trading nation.”

Trump predicted this week that more countries will leave the EU, but Drake said it is in Britain’s interest to see the EU remain united and strong.

“None of us can speak for Donald Trump,” he said. “We, the U.K., want the EU to succeed. We want the single market to succeed. It is not in our interest, let alone the EU’s interest, for that not to happen.

“We have no interest in destabilizing the EU or the single market; quite the contrary.”

Drake welcomed Trump’s desire to swiftly negotiate a bilateral trade deal with Britain. A similar deal with Canada is also a priority, he added, although actual negotiations will have to wait until Britain formally leaves the EU, since it can’t sign bilateral trade deals while still a member.

But the Comprehensive Economic and Trade Agreement between the EU and Canada would be a good template for a future bilateral deal, Drake said.

“There’s an awful lot in there we think — and we think our friends in Canada think — could be replicated in a bilateral deal. I’m not saying that will just happen overnight,” he said.

“But there is clearly an awful lot of hard work already in place that we can make use of.”

Joseph Pickerill, a spokesman for Foreign Affairs Minister Chrystia Freeland, said in a statement that Canada “looks forward to working constructively with a strong U.K. and a strong EU.”

“Trade means more growth, and more growth means more jobs,” Pickerill said. “That is precisely why Canada worked hard to achieve CETA, a progressive trade agreement for Canada and the EU that will deliver positive results and opportunities for both citizens in the EU and Canada.”

Once Britain invokes Article 50 of the EU treaty later this winter — something that’s never been done — it will start a two-year clock to negotiate Britain’s departure.

Numerous analysts and political observers say it could take far longer than two years to complete the unprecedented departure of a EU member country.

While Britain may have ambitions of crafting its own series of bilateral trade deals, including with Canada, its public service is devoid of trade negotiators.

That’s because it has relied on the EU for several decades to negotiate trade deals, such as the Comprehensive Economic and Trade Agreement between it and Canada — a pact that took seven years to negotiate and still isn’t ratified.

U.S. President Barack Obama said last year Britain would be “back of the queue” when it came to negotiating new trade deals. But an adviser for president-elect Donald Trump said Tuesday that a U.S.-Britain trade deal could be negotiated far quicker than usual.

Anthony Scaramucci said Trump is “hard charger” and is surrounded by a team that is “very result-oriented.”

Earlier this week, Trump himself told the German newspaper Bild and the Times of London that he could get a trade deal done with Britain “very quickly.”

“It’s good news that the U.S. wants to do a deal with us. In principle, we welcome that,” said Drake.

May’s speech made it clear Tuesday the United Kingdom was intent on making a clear break with Europe, spelling out the United Kingdom’s intent to leave the single European market, end the freedom of movement for people from Europe, and withdraw from the European Court of Justice.

May said Britain was withdrawing from the market of 500 million so it could make its own laws and control its borders.

The speech ended months of uncertainty since British voters decided in a June referendum to leave the European Union. The sluggish pound rallied, and European leaders welcomed Britain’s clear position.

German Foreign Minister Frank-Walter Steinmeier welcomed the “clarity” of the British position. But European Council President Donald Tusk encapsulated the melancholy that accompanied the international divorce filing, when he said on Twitter it was a “sad process, surrealistic times but at least (a) more realistic announcement.”

But Drake said Britain and the EU will maintain strong links especially on security co-operation and combating terrorism.

“We’re not leaving Europe,” he said. “We’re just leaving this one particular institution.”