British royal couple is in India for a weeklong tour 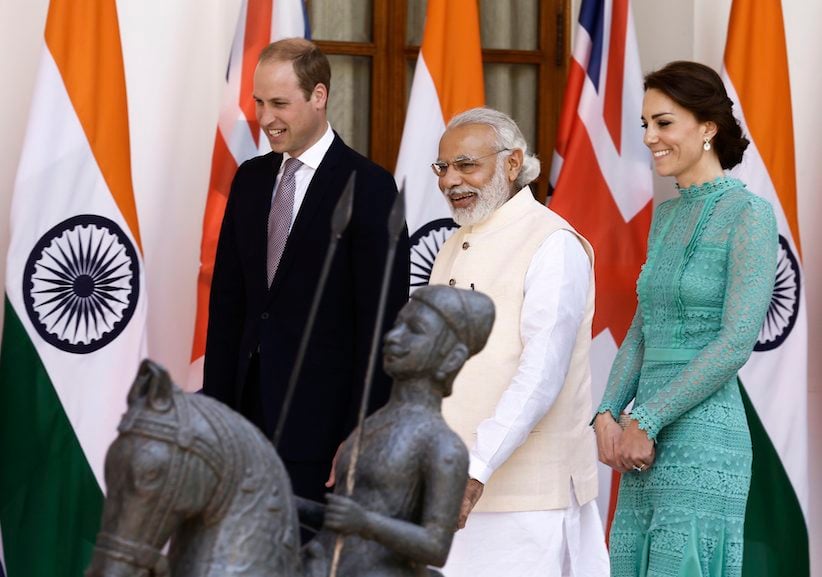 Britain’s Prince William, left, and his wife Kate, the Duchess of Cambridge, right, are greeted by Indian Prime Minister Narendra Modi as they arrive for a lunch with him, in New Delhi, India, Tuesday, April 12, 2016. (Saurabh Das, AP)

NEW DELHI — The Duke and Duchess of Cambridge joined Indian Prime Minister Narendra Modi for a private lunch Tuesday at a former palace in New Delhi.

Before going indoors, Prince William and his wife, the former Kate Middleton, strolled on either side of Modi, chatting and smiling before posing for cameras. Kate wore a full-sleeved gauze green dress, while William donned a blue suit and Modi was clad neck-to-toe in white.

The British royal couple is in India for a weeklong tour. They’ve already visited Mumbai, and were to travel later Tuesday to a wildlife park in the northeastern state of Assam that is home to various endangered animals.

They’re visiting Kaziranga National Park specifically to focus global attention on conservation. The 480-square-kilometre (185-square-mile) grassland park is home to the world’s largest population of rare, one-horned rhinos as well as other endangered species, including swamp deer and the Hoolock gibbon.

The royal couple will also take a one-day trip to neighbouring Bhutan at the invitation of the Himalayan kingdom’s King Jigme Khesar Namgyal Wangchuck and Queen Jetsun Pema.

William and Kate will then head back to India, where they’ll wind up their tour with a visit to the Taj Mahal, retracing the steps of a 1992 visit to the monument of love by William’s mother, the late Princess Diana.

William and Kate are travelling without their two children — 2 1/2-year-old Prince George and 11-month-old Princess Charlotte. They had taken George to Australia with them in 2014 on their last royal tour.