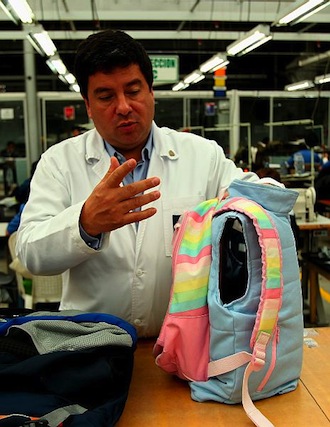 Colombian fashion designer Miguel Caballero dresses world leaders, the rich and famous and even royalty, with his slim and stylish bulletproof garments. Now the man known as the Armani of bulletproofing wants to outfit a new and unlikely clientele: schoolchildren. Capitalizing on the fears of parents after the slaying of 20 first graders in Newtown, Conn., Caballero recently launched a new line of children’s clothing under the MC Kids label. It includes bulletproof T-shirts durable enough resist a Mini-Uzi, reinforced puffer jackets that weigh only five pounds, and a backpack that doubles as a shield.

Caballero says he’s no opportunist, just responding to demand—albeit reluctantly. Over the years, he’s received repeated requests for kids’ clothing from clients in Asia and the Middle East, but always refused, “because I believe that minors should not be part of the conflict.” But the Bogotá-based designer does big business in dangerous places, including his native Colombia, where former president Álvaro Uribe wore bulletproof guayabera shirts, and Mexico, where he opened an outlet in the capital’s posh Polanco neighbourhood. Now he has America’s parents lining up.