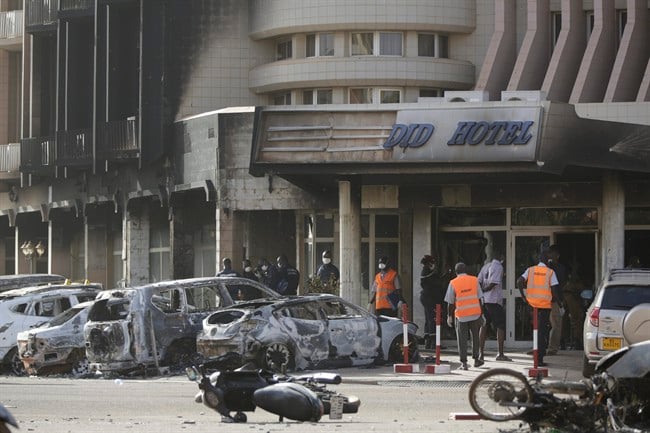 OUAGADOUGOU, Burkina Faso — Burkina Faso began three days of national mourning Sunday and the president said security would be stepped up in the capital and the country’s borders after al-Qaida militants in a vehicle from neighbouring Niger killed at least 28 people in an attack on a hotel and cafe popular with foreigners.

In a message to the nation, President Roch Marc Christian Kabore said the people of Burkina Faso must unite in the fight against terrorism. He also announced on the national broadcaster, Burkina 24, that security forces would be stepping up their efforts to thwart future attacks and asked people to comply with the new restrictions.

“These truly barbaric criminal acts carried out against innocent people, claimed by the criminal organization al-Qaida in the Islamic Maghreb (AQIM) seek to destabilize our country and its republican institutions, and to undermine efforts to build a democratic, quiet and prosperous nation,” said Kabore.

The national mourning began Sunday, a day after Burkinabe and French forces ended a more than 12-hour siege at the upscale Splendid Hotel in downtown Ouagadougou. When the gunfire and explosions finally stopped, authorities said 18 were killed in the hotel and 10 were killed at the nearby Cappucino Cafe.

The American — Michael Riddering, 45, of Cooper City, Florida — had been working as a missionary in Burkina Faso since 2011, where he and his wife ran an orphanage that also provided shelter to abused women and widows. He is survived by his four children, two of whom were adopted from Burkina Faso.

Riddering was “a wonderful, godly man” who managed to find spare time to help teams of volunteers from other organizations who dug wells for local residents, said John Anderson, a board member of Sheltering Wings, Riddering’s charity.

“During the Ebola crisis, when it was hard to find people to do the digging, Mike would go out and join them so they could continue doing the work,” Anderson said. “And that’s backbreaking work. He never stopped moving and never stopped helping.”

Swiss authorities said its two nationals who were killed were also in Burkina Faso for humanitarian reasons.

The al-Qaida group claiming responsibility for the carnage released an audio tape titled: “A Message Signed with Blood and Body Parts.”

On Sunday, French authorities were back at the scene carrying out a forensic investigation. Special forces from the former colonizer came during the overnight siege from their base in neighbouring Mali to help Burkina Faso’s military put an end to the killings.

Some guests returned to the Splendid Hotel to pick up their luggage and other belongings left behind when guests fled for their lives when the gunmen began firing to kill as many people as possible.

The attack, which began around 7:30 p.m. Friday, was the first of its kind in Burkina Faso, a largely Muslim country that had managed to avoid the kinds of jihadist attacks that have destabilized neighbouring Mali since 2012.

In a separate incident two Australian humanitarian workers were kidnapped by extremists in northern Burkina Faso. Surgeon Ken Elliott and his wife, Jocelyn, were abducted Friday. The couple, reported to be in their 80s, were kidnapped in the northern town of Djibo where they had run a medical centre for 40 years.