California's water woes are man-made—and so is the solution

Colby Cosh on Year Three of a nearly unprecedented drought, and the sustainability of California as we know it 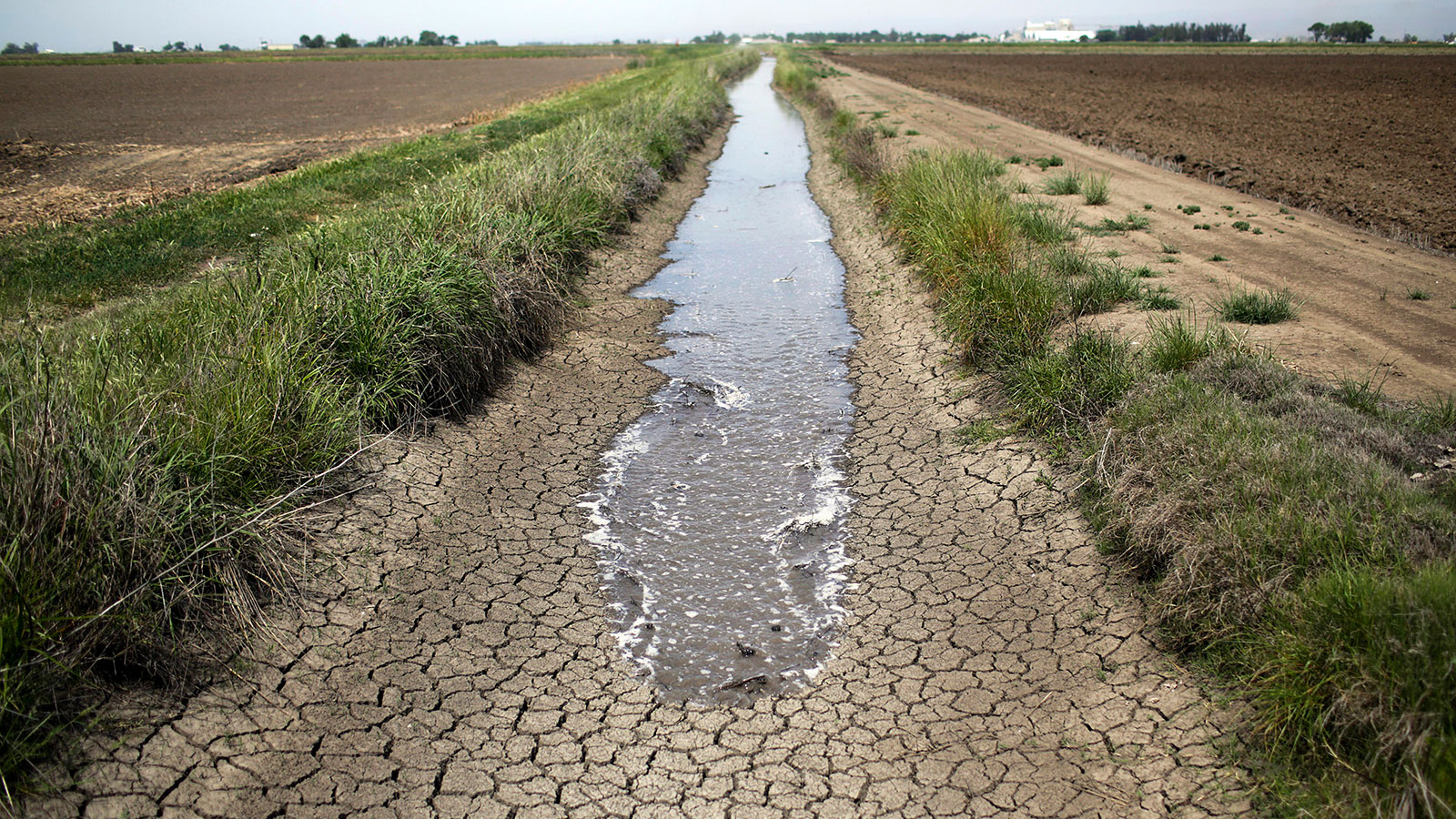 You often hear from farmers, environmental Jeremiahs, and amateur economists that the wars of the future will be fought over water. This is almost certainly balderdash. Turn the pages of history, and you will find confirmation that large-scale human conflicts usually begin in religion, ethnic unpleasantness, dynastic strife, or ideology. Rarely do they flare up over some specific strategic object or resource. (The most brutally contested part of the Middle East is, notoriously, just about the only part of that region that has no oil.)

People may occasionally kill each other over water, in the context of a military siege or a tribal dispute over an oasis. Peoples rarely do. After all, full-fledged civilizations don’t grow up in the first place where there is no drinking water or access to arable land. But perhaps there is one great near-exception: the state of California, that grand human contrivance founded on reservoirs and aqueducts.

It is perhaps not easy to be sanguine about the ultimate sustainability of California as we know it—especially when one thinks of its immaculate lawns, its endless burbling fountains and its lush orange groves. From top to bottom, nothing in California seems to resemble the hydrographic austerity taken for granted in Arizona or New Mexico.

California is in Year 3 of a drought of nearly unprecedented harshness and extent. The U.S.’s National Drought Mitigation Center operates a “drought monitor” that currently describes 58 per cent of California’s land area as being in a state of “exceptional” drought. Eighty-two per cent is either “exceptional” or “extreme.” Throw in “severe” and we are up to 95 per cent.

As a consequence, farmers are tapping deeper than ever before into the state’s groundwater supply. This is a problem because nobody is sure how large the supply is and how readily it can replenish itself. NASA has twin satellites that measure tiny changes in local gravitation to create a sort of X-ray of what’s happening underground. These clever gadgets tell us the groundwater in the American West is dwindling, but they don’t know the total volume of the various aquifers, and they have only been aloft since 2002.

Water levels in the state’s major reservoirs are characterized as “low,” with some at 20 per cent or less of their capacity. Emergencies have been officially declared in 25 different California counties and 13 cities, including Santa Barbara. In March, the state government passed a funding bill approving $687 million for accelerated anti-drought projects, most of it going to upgrades to the various water-engineering systems that keep California looking fresh and green. In late July, the state zapped homeowners with an emergency regulation outlawing the use of hoses on sidewalks and driveways. (You can still wash the car, but only if the hose has a trigger nozzle that shuts off automatically.)

There is wide agreement that California’s drought problem is man-made. As you would expect, liberals think the problem is insufficient regulation, and conservatives think it’s a matter of badly designed markets failing to deliver price signals. Both are probably right. California, almost uniquely among western U.S. states, does not regulate groundwater use at the state level. This can lead to a tragedy of the commons during dry years. If you own a vineyard, you have an obvious incentive to pump like crazy before your neighbour gets the same idea.

The California state constitution of 1879 specified strong, unconditional public control of overland water resources, but it also immortalized the water rights already held at that time by various landowners and communities. Some of those rights date back to Spanish overlordship of California. The system is a legendary snarl of complexity, made worse by each new generation of judges, and about equally likely to make a lawyer rich or insane.

California’s Democrat-dominated assembly, bestirred by the drought, is trying to pass bills that would allow for state-level groundwater regulation, exercised through local water authorities. But it will probably always be cheaper just to drill for groundwater on one’s own land than to get explicit permission.

There are water markets in California that do a little to steer water toward higher-valued uses. Farmers growing crops that can be produced in water-richer states (or countries) can let fields lie fallow and rent water rights to neighbours who have orchards or vines. That offers hope for worried Canadian consumers who favour almonds, lemons, or garlic. California growers will naturally cut back—are already cutting back—on rice or hay in order to protect the state’s most irreplaceable crops.

The problem here is that California does have water markets—plural, not singular. The complexities of environmental and property law surrounding water make long-distance in-state transfers of water all but impossible. And the local markets that do exist are highly informal, with no central exchanges.

For a coastal state, methods of drought defence are pretty easy to enumerate. The first and most natural idea, a perennial favourite of Republicans, is to build dams to trap more of the freshwater running down to the sea. The last major new dam built in California was the New Melones in the Sierra Nevada hills, polished off by the Army Corps of Engineers in 1978. That’s the same Sierra Nevada that gives the Sierra Club its name, which pretty much sums up the problem.

The dam was built only after a fantastic struggle, which included oodles of litigation, occasional sabotage and, most famously, threatened human self-sacrifice. Mark Dubois, a kindly six-foot-eight river guide and rafting enthusiast, chained himself to a boulder in the valley of the Stanislaus River as the Corps was filling it. That got president Jimmy Carter’s attention, and he ordered the Corps not to drown Dubois. The canyon of the Stanislaus was eventually filled (more by Mother Nature’s will, as it happened, than any official’s). But the principle that one determined person can hold up a water-storage project nigh on indefinitely was established.

Dam opponents point out that most of the best sites were snapped up anyway in the hydrological building boom that followed the Second World War. The New Melones Dam, for one, proved to be a disappointment, never living up to its projected storage capacity except when it was inconveniently overflowing into the spillway. California voters will be asked in November to approve $7.5 billion in water-related borrowing, including $2.7 billion for new storage. (There’s another hint at the man-made nature of the drought problem: In California, the inevitable strife over new infrastructure projects doesn’t even kick off until statewide voters consent to the spending in the first place.)

Local water authorities are already lining up at the offices of the state water commission with blueprints in hand. But even if the bond is approved and all the money is spent, the new water might not balance out even one per cent of California’s freshwater consumption.

So if you can’t trap more water, maybe . . . use less? Right now, California Gov. Jerry Brown is combining moral hectoring with emergency regulation in order to get city dwellers to cut back on water usage. But despite appearances, California’s total urban water usage has remained steady for 20 years, even as the state added seven million souls. On a per-capita basis, the progress has already been remarkable. (Things would be worse in California without those awful modern eco-friendly toilets.) And the same more or less applies on the agricultural side.

That leaves California with one other obvious option: Look left, to the ocean. Desalination of seawater, like solar power, is becoming less of an impractical sci-fi fantasy every year. Australia, which spent most of the first decade of this century in the throes of an extended drought, is a popular model for Californian water thinkers. Its government invested desperately in desalination, with the usual cost overruns and experimental bungles, but four large plants now produce nearly a billion litres of freshwater a day. (Urban California is thought to use on the order of 30 billion litres a day.)

Desalination facilities are extremely energy-hungry, but their locations make them a good fit with renewables like wind and tidal power. Perth, the Western Australian city that is one of the driest on the planet, gets half its drinking water from a desalination plant paired with a wind farm. Is it expensive? Yes. Is it exactly the sort of thing that forward-thinking, big-dreaming California, starved of better alternatives, might try in the long run? Who can doubt it?