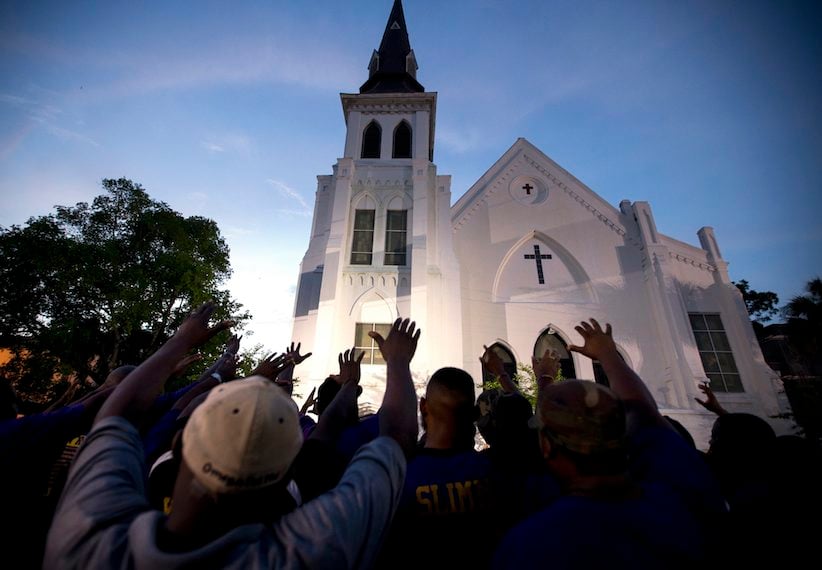 The men of Omega Psi Phi Fraternity Inc. lead a crowd in prayer after a memorial in Charleston, S.C. (Stephen B. Morton, AP )

But opinions changed within five days of the massacre of nine people at a historic black church in Charleston, as a growing tide of Republicans joined the call to remove the battle flag from a Confederate monument in front of the Statehouse and put it in a museum.

On Monday, Gov. Nikki Haley did what a previous Republican governor found to be political suicide. She not only called for the flag’s removal but pledged to call legislators back to Columbia if they don’t deal with it in a special session Tuesday. Just hours before they return to work, a rally to bring the flag down will be held outside the Statehouse.

The flag was placed atop the Statehouse dome in the 1960s as an official protest of the civil rights movement. After mass protests, it was moved to the grounds in 2000, as part of a compromise between a group of black lawmakers and the Republicans who have controlled South Carolina for a quarter-century.

That deal has kept it flying high since the shooting, even as state and U.S. flags were lowered to honour the victims.

Haley has for years deflected questions about the flag. But she said Monday she was moved by the outpouring of love and forgiveness that followed the “true hate” of the crime. She noted her entire family attended Emanuel African Methodist Episcopal on Sunday, when the church reopened its doors.

She stressed that, for many South Carolinians, the flag still represents noble traditions of heritage and duty, but for many others, it is a “deeply offensive symbol of a brutally oppressive past.”

“The hate-filled murderer who massacred our brothers and sisters in Charleston has a sick and twisted view of the flag. In no way does he reflect the people in our state who respect and, in many ways, revere it,” she said.

The governor’s declarations sparked action in other arenas as well Monday: Mississippi House Speaker Philip Gunn called for the Confederate emblem to be removed from the state flag, becoming the first top-tier Republican to do so.

In Tennessee, both Democrats and Republicans called for the removal of a bust of Confederate general and early Ku Klux Klan leader Nathan Bedford Forrest from an alcove outside the Senate’s chambers.

And Wal-Mart announced Monday that it is removing any items from its store shelves and website that feature the Confederate flag.

Removing the flag in South Carolina won’t be easy, despite the shifting sentiment.

Legislators return to Columbia on Tuesday for what was supposed to be the end of a limited special session to approve a state budget. Just adding the flag to the agenda will take two-thirds approval by both chambers.

While those standing behind Haley included state and federal Republican officeholders, the top Republican leaders of the Legislature were absent.

But state Republican Chairman Matt Moore said the Republican legislative leaders he’s talked with are committed to the flag coming down.

“I think both parties are united that it should be done. The legislative process will obviously be a challenge given the rules of both chambers, but with enough political will anything can be done,” he said.

The last governor who called for the flag’s removal, Republican David Beasley, was hounded out of office in 1998 by the Sons of Confederate Veterans. The group’s influence also doomed his front-running Senate campaign for the seat won by Republican Jim DeMint.

“Do not associate the cowardly actions of a racist to our Confederate Banner,” the group’s South Carolina commander, Leland Summers, said in a statement. “There is absolutely no link between The Charleston Massacre and The Confederate Memorial Banner. Don’t try to create one.”

The governor’s announcement came as civil rights groups planned days of marches and protests against the Confederate flag that Roof embraced.

“The flag got appropriated by hate groups. We can’t put it in a public place where it can give any oxygen to hate-filled people,” said Charleston Mayor Joseph P. Riley Jr., a Democrat.