Can India's PM go from villain to hero in America?

Once banned from the country for his role in deadly riots, Narendra Modi wants to reset Indian-U.S. relations 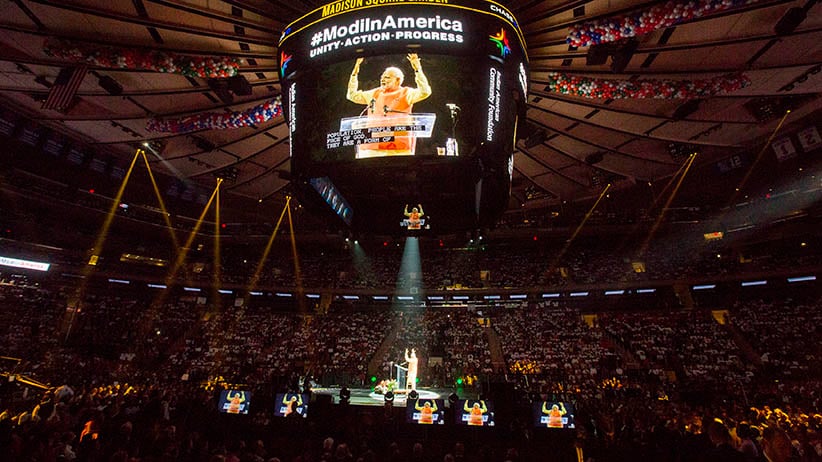 As Indian prime minister, Narendra Modi took to the stage at Madison Square Garden this Sunday, the audience burst into a crescendo of Modi chants, a welcome that could have rivaled a Justin Bieber entrance. The $1.5 million event opened with a dance performance and a laser show with Hologram-lit Indian historical figures. By the time Modi made it to the stage, the audience was suitably electrified. Dressed in a custom designer outfit and sporting his signature Nehru jacket, this time in the saffron hue that represents the Hindu-nationalist party that backed his candidacy, Modi hit all the right notes, delivering a speech reminiscent of a preacher and marked by intermittent outbursts of audience applause, and “Modi! Modi! Modi!” chants.

Modi arrived in New York on Friday for a five-day visit to the United States after speaking at the UN General Assembly. In addition to meeting U.S. President Barack Obama, Bill and Hilary Clinton, and leaders of major corporations, Modi’s visit is important for several reasons. For one, it is his first visit since the U.S. imposed a travel ban on him for his alleged involvement in the Godhra riots of 2002, which resulted in over 1,000 deaths, mostly Muslims. (He was granted a visa for the trip despite the ban). Second, the Madison Square performance was an opportunity for Modi to demonstrate the strength of the 2.8 million-strong Indian American community, an effective lobbying demographic given its high-income earnings. Finally, Modi’s visit marks an opportunity for a change in bilateral ties between the United States and India.

Over the last couple of years, ties between the two countries have been through a low, beginning with the failure of the civil-nuclear agreement to enhance ties and ending with U.S. Attorney for New York, Preet Bharara’s indictment of Indian diplomat Devyani Khobragade over visa fraud and the sudden departure of the U.S. Ambassador to India.  “India has to somehow get into the U.S. narrative,” said Sanjay Kapoor, editor of Hard News and a political commentator. “They realize the importance of the U.S.” With America involved in a number of overseas operations, including a crisis in Ukraine and a serious confrontation with Islamic State in the Middle East, some fear the visit won’t get the kind of public attention it deserves.

Michael Kugelman of the Asia Program at the Wilson Centre—who has called this “the great power summit most American’s don’t know about”—believes that, while this is a great opportunity for forward momentum, not much more than happy talk is likely to come out of the meeting. “I really don’t see anything of major significance or substance coming out of these talks,” said Kugelman. “But the very fact that they are happening is a really positive…It suggests that Modi is willing to move beyond the past and get the relationship back on track.”

Modi, as leader of the Hindu-nationalist Bharatiya Janata Party (BJP), has been hailed as one of the world’s most tech-savvy political leaders inspiring other leaders, like Turkey’s Tayyip Erdogan, to beam himself using holograms. And he has a reputation for strict and clean governance, and business-friendly leadership. In New York, he spoke to a cooing audience in Hindi, boasting of the promise that lies in India, where 65 per cent of the population is under 35. He highlighted India’s recent success at putting a spacecraft into orbit around Mars (the first successful Asian interplanetary mission). With this mission to the U.S., Modi wants to go home with billions of dollars in investment by promising that he will get rid of red tape and make investment easier and more transparent. Much of his Madison speech talked about cleaning up—literally and metaphorically—India.

“There is significant skepticism with the U.S. corporate community that he will not be able to do what he says he will,” said Kugelman. “Both countries tend to set expectations too high…there has been a great deal of progress in relations since the 1970s and 80s but there is also a lot of mistrust behind all the nice rhetoric.”

Modi’s soaring oration earned much cheer but perhaps promised too much. “I have a dream,” Modi repeated three times, in Hindi, reminiscent of Martin Luther King’s famous speech. “By 2022, by our 75th independence anniversary, there will not be a single Indian family without a roof over their heads.” He talked of exporting teachers and nurses from India to the world when India’s public health and education system is in crisis. Such promises fell on passionate ears at Madison Square Garden but sounded hollow closer to home where enormous challenges exist on the ground.

His detractors made a minor showing in New York. A small group of demonstrators stood outside the arena holding placards and shouting slogans against Modi for his alleged role in the Gujarat riots. His happy return to the U.S. was also slightly marred by a summons for an appearance in a New York court to respond to allegations filed by the American Justice Centre, a non-profit human rights organization, regarding his role in the  riots. (Modi has immunity, U.S. and Indian officials argue.)

As Modi meets with Obama and senior White House officials this week, expectations are that he will return home with something substantial. “He imagines himself as a regional leader who has to do certain things that have not be done by the previous leader,” said Kapoor. Relations had plummeted under former Indian prime minister Manmohan Singh’s leadership and there were few bilateral gains. Modi wants to change that record. Through his performance at Madison Square Garden, he at least demonstrated his intent.