Canada could save 10,000 Afghans from the Taliban. Or more.

Scott Gilmore: A mass rescue on that scale has been done before, and we owe it to those who believed and trusted us to do it again 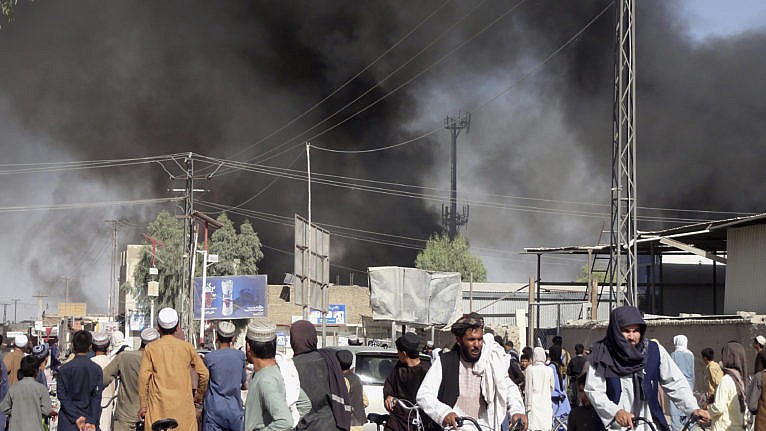 Smoke rises in Kandahar after fighting on Thursday between the Taliban and Afghan security personnel. The Taliban say they've taken control of the city. (Sidiqullah Khan/AP)

UPDATE, 7 p.m. EDT. Aug. 13, 2021:  Immigration Minister Marco Mendicino told a news conference on Friday evening that Canada would resettle more than 20,000 Afghans to protect them from reprisals by the Taliban. The minister did not provide a timetable, but said the initiative would focus on women leaders, human rights defenders, reporters, persecuted religious minorities and members of the LGBTQ community.

The Taliban took Khandahar yesterday, and an attack on Kabul is expected soon. There are reports Canadian special forces troops are deploying to evacuate our embassy. And, according to Global News, a number of Afghans who have worked for Canada are sheltering inside one of our compounds, in the hopes of rescue.

Eighteen years ago Prime Minister Chretien took the decision that Canada would be contributing troops to the International Security Assistance Force in Afghanistan and opening an embassy. The actual task of accomplishing the second part of that bounced down through the bureaucracy until it found a junior diplomat who couldn’t delegate any lower—me.

In the months ahead, I became a frenetic paper pusher, making sure the appropriate government committees and authorities signed off on everything from the number of diplomats we would send, to the height of the blast wall. And in the years after that I continued to work in Afghanistan as a diplomat, a contractor and an aid worker.

During that time, I went from energetic enthusiasm for the international mission, to concern, then to doubt, and finally to outright opposition. Now, if I were asked to write the epitaph on the Afghan war—a conflict that has cost billions, created millions of refugees and killed hundreds of thousands—the best I could muster would be three words: “We meant well.”

Eventually we, in Canada and in the West, will decide whether it was worth it. But, right now, as helicopters head for rooftops, there is a far more important question to answer—namely, what can we do in these final hours to protect those Afghans who believed and trusted us?

The answer is both very little, and a great deal. At this stage there is no chance we can turn the tide of the war. American forces are out and not coming back, except to safeguard their own evacuations. Besides, it is clear that the Afghan National Army has entered terminal collapse; all our efforts to give the new democracy a sword and a shield utterly failed. The country’s fate now seems unavoidable.

But, for individual Afghans, for the thousands who helped our forces, who worked for our aid projects, who struggled harder than any outsider to educate girls, hold elections, and build hospitals, there is still a little hope.

The Taliban have already begun summarily executing those Afghans they consider traitors, because of their work for foreign forces, or because they were part of western aid projects, or simply because they dared to be a woman journalist. If we leave these people to their fate, if we abandon the Afghans currently sheltering in the Canadian compound, it will not just be heartless, or cruel, it will be manslaughter.

In this regard, the Trudeau government has already demonstrated a willingness to do the right thing. Earlier this month, interpreters, cultural advisers and support staff who worked for Canadian Forces were airlifted to Canada. But, there is still far more we can do in the coming days.

We cannot save everyone. But Canada can save a lot, thousands even. We could immediately airlift 10,000, at least. We can save these people from the Taliban. We can bring them to Canada. We can offer them refugee status. We can help them build new lives and build a better Canada. We have the capacity to do so. We have a proud history of doing so. And, most importantly, we have a moral obligation.

First, logistically this is possible and well within the capability of our government and armed forces. In 2006, with only days to prepare, Canadian Forces undertook Operation Lion and evacuated 15,000 Canadians from Lebanon—and they were prepared to take up to 50,000. With some diplomatic finesse, an airbridge between Kabul and Dubai could be organized overnight, creating a waystation to process the refugee claims and set up onward patriation to Canada. If Dubai balks at the idea of housing these Afghans in the interim, we could put them on cruise ships anchored offshore, which is what we used in Lebanon.

A rescue mission of this scale is also well within the legal powers of this government. Canada currently accepts over 300,000 new citizens a year, including more than 30,000 refugee claimants. The government already has the legislative authority to offer every Afghan who worked for Canada directly, supported our mission indirectly, or strove to build the new democracy, refugee status. It only requires ministerial approval, not even a vote in the House of Commons.

And, we need them, too. There are decades of proof and mountains of evidence that refugees make this country better. Compared to other immigrants or those born in Canada, refugees are more likely to be entrepreneurs, more likely to participate in civil society and even more likely to feel a “strong” sense of belonging to Canada. An influx of Afghan refugees will not solve our problems related to falling birth rates and an aging population, but they will help.

We have undertaken similar missions in the past. In fact, welcoming 10,000 Afghan refugees would actually compare only feebly to our responses to previous crises. In recent years we have taken in more than 44,000 Syrian refugees. In 1979 we accepted more than 60,000 Vietnamese boat people.

Finally, if the current government still needs further encouragement that this is the right thing to do, it should consider that this is one of the only issues that unites Canadians of all political persuasions—both Conservative leader Erin O’Toole and NDP leader Jagmeet Singh have called on the Liberals to do more and expand the airlift.

We cannot undo the sacrifices Canada has made in Afghanistan. But we can still indelibly dishonour those sacrifices by breaking faith with the Afghans who helped us, and who we tried to help. Let’s bring home those who trusted us when we said we were there to build and protect their future.