What Canada could learn from a Dutch self-build housing movement

Low-income Dutch families have wrested control of their homes from big developers who pump up prices. Could Vancouver be next? 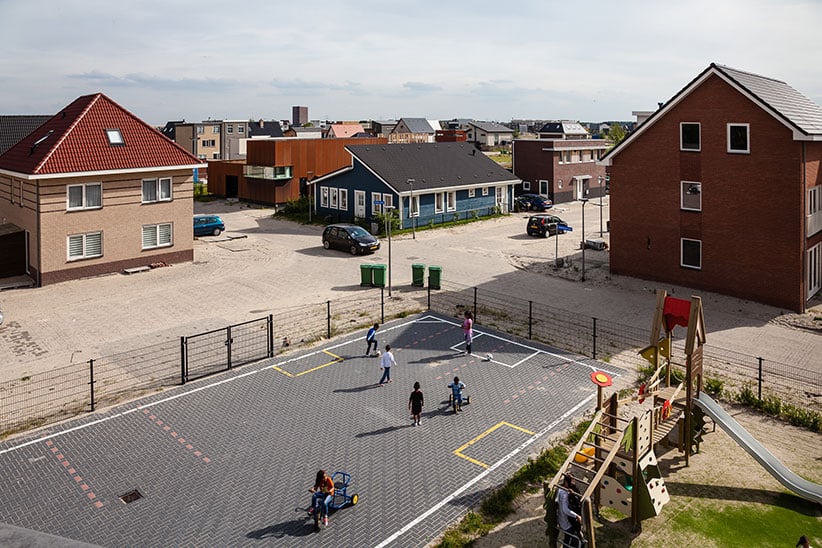 Many Western countries, Canada, the U.S. and Britain among them, are currently facing a housing crisis when it comes to middle- to low-income residents. A combination of soaring real estate values, high rents, stagnant wages and a premium on urban space have conspired in recent years to make it difficult for regular working people to acquire stable, affordable family housing. It seems the Dutch—known for their industriousness as well as their love of cycling and social liberalism—may have hit upon a surprising solution in the form of radical DIY.

After the devastating financial effects of the 2008 market crash shut down property development in the Netherlands, the Dutch government decided to encourage the notion of self-built housing—i.e. new homes, often constructed in large-scale developments, but financed and customized by private individuals (not developers) with help from government stimulus schemes. While the Canadian and British governments offer first-time buyers certain advantages and incentives (for instance, the right to borrow against any RRSPs in Canada), the Dutch government has, for nearly the past decade, heavily subsidized private investment in new housing projects for middle- to low-income buyers. Similar schemes exist in Germany, Austria, France and Italy as well, but in the Netherlands, self-build now accounts for a third of all homes purchased.

The world headquarters of the self-build movement is the small Dutch city of Almere, in a district called Oosterwold. A hub of radical social planning, Almere is also one of the most rapidly expanding cities in Western Europe. After the financial crisis, when development ground to a halt, the city government embarked on projects geared at providing new housing for families earning less than $29,000 a year.

Under the Almere Poort housing project, private individuals can purchase a plot of land from the government and easily secure a mortgage with a small down payment. After that, Almere residents can build their own customized house (with the help of qualified tradespeople of course) according to basic government standards. The result is a small city of some 190,000 in which the majority of residents live in houses they designed and oversaw the building of themselves. The idea, according to the city government, was to foster a new direct relationship between individuals and the local authority, cutting out developers, who often scoop up large plots of residentially zoned land and act as middle men, pumping up local real estate prices.

The success of Almere has become a fascination for innovative city planners across Europe, and the reason is not just its past success but future ambition. The Oosterwold project is not just a collection of houses but a community that’s part of a 30- to 50-year plan for the development of the outskirts of the entirety of Almere. As Jeroen Zuidgeest, one of the self-build architects who help develop the basic rules on irrigation, road planning and building codes, told the Guardian last year, “It means you are not simply building a house and a garden but also part of the infrastructure, part of the energy network and so on. The most important rule is that you have more liberty and also more responsibility for the development of Oosterwold.”

The theory behind self-build is fairly radical, however, in that it transgresses many of the common zoning and restrictions in countries like Canada and Britain. Looking at the results, these communities might be not be, aesthetically speaking, to everyone’s taste. Self-built designs have a somewhat inconsistent feel that architectural critics might describe as “higgledy piggledy,” or worse, “a dog’s breakfast.” Since the Victorian era and the rise of middle-class housing developments, there has been a conventionally accepted notion in the West that housing facades ought to be more or less aesthetically consistent in terms of design and scope.

But self-build projects across Europe also embrace the idea that people will naturally build what’s best for themselves and their local community if strongly invested from the outset. It’s a notion that runs contrary to the paternalistic view of past social housing projects, i.e. that developers and urban planners are in a unique position to figure out what’s best for low-income families—rather than the low-income individuals themselves.

In any case, the Dutch are doing it their own way and other countries are following suit. Britain has plans to build roughly 20,000 new self-build homes in the coming months and one Tory MP, Richard Bacon, has been crusading around the country promoting the idea that self-build will effectively “break open the oligopoly of companies who control housing development,” and “offer financial help and housing for poorer people.”

Could Vancouver be far behind?