Canada waits for Baghdad to sign off on arms for Kurds 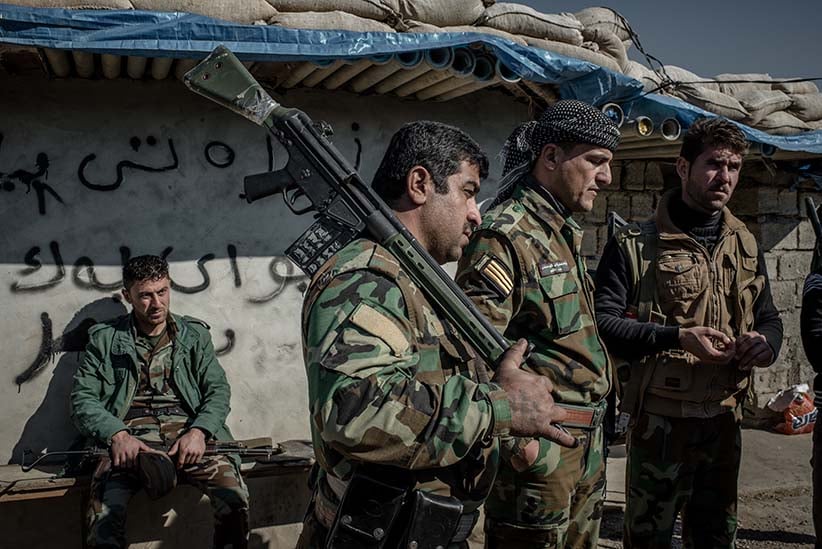 More than 10 months after the arms and ammunition were promised, government officials say they are waiting for the Iraqi government in Baghdad to sign off on any arms shipment.

It’s the latest delay involving Baghdad and Canadian military support for the Kurds in their fight against the Islamic State of Iraq and the Levant.

Defence Minister Harjit Sajjan last month blamed Iraq’s central government for holding up a Canadian military hospital that was to treat casualties during the attack on Mosul.

The Iraqi government also temporarily detained a military plane in November 2015 that was carrying weapons to Canadian special forces in northern Iraq.

Officials have not disclosed why the Iraqi government dragged its feet with the hospital, which was finally up and running last week, or the provision of arms to the Kurds.

But the delays come amid rising tensions between Baghdad and the Kurds over who will ultimately control large parts of northern Iraq.

MORE: What happens after Iraq takes back Mosul?

The Liberals said in February that Canada would provide small arms, ammunition and optical sights to the peshmerga, as Kurdish forces are known, as part of its revamped mission to fight ISIS.

The weapons, to be purchased on the open market, are expected to include rifles, machine guns and light mortars, though the government has not said how many of each or what specific types.

In September, the government said it would not ship any weapons to the Kurds until Canada received assurances the military equipment would be used in accordance with international law.

But officials revealed during a briefing last week that the weapons are now being held up because Canada still needs the Iraqi government’s approval.

“What we do is in consultation and with the consent of the government of Iraq,” said Sean Boyd, director of strategic policy for the Middle East at Global Affairs Canada.

“At this point, Iraqi officials have not provided to the Canadian government that consent for these weapons to be brought in.”

Boyd would not comment on whether tensions between the Kurds and central government were behind the delay.

“How they organize themselves in the relationships between the Kurdish region and the government in Baghdad is an internal matter,” Boyd said.

Kurdish peshmerga and Iraqi government forces have been working together in northern Iraq to free the city of Mosul from ISIS’s grip.

However, there has been public disagreement between the two sides in the past week over whether the Kurds will be allowed to keep territory taken back from ISIS, but claimed by Baghdad.

Kurdish president Massoud Barzani spoke last week of an agreement giving his semi-autonomous government control over land “liberated by the blood of 11,500 martyrs and wounded peshmerga.”

Barzani’s comments are the latest to indicate the Kurds will not relinquish territory captured by the peshmerga, as his regional government seeks full independence from Iraq.

Iraqi Prime Minister Haider al-Abadi’s office noted that the agreement actually called for “the withdrawal of the peshmerga from the liberated areas after the liberation of Mosul.”

Canadian officials warned Prime Minister Justin Trudeau last year that the Kurds could use the military training and equipment Canada is providing to fight ISIL to one day push for an independent state.

But in a briefing note prepared for Trudeau shortly after the election, officials said, “Should the (ISIL) threat recede Baghdad will have to contend with a range of land disputes with the (Kurdish government), as well as strengthened Iraqi Kurdish forces, which have received training and equipment from coalition members, including Canada.”