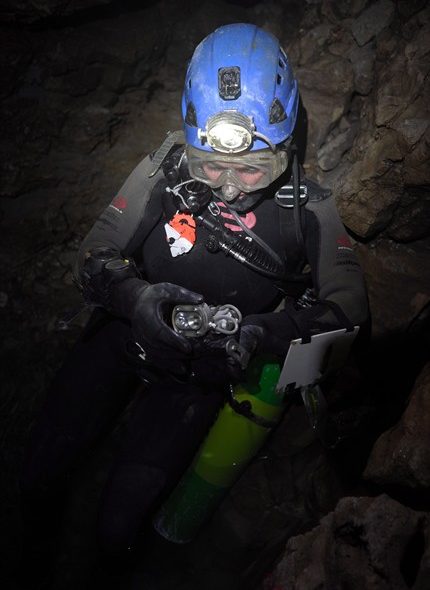 Kathleen Graham leads an expedition of Bisaro Anima, which she calls the deepest cave in Canada, near Fernie, B.C., in 2018. The Alberta-based explorer says her heart goes out to the members of a boys' soccer team as they await rescue from a partly flooded cave in Thailand. (CP/HO-Jared Habiak)

An Alberta-based explorer who was trapped in a partly flooded cave for days says her heart goes out to the members of a boys’ soccer team as they await rescue from an underground cavern in Thailand.

Kathleen Graham, president of the Alberta Speleological Society, says she remembers “pure relief” washing over her as she emerged from the darkness of Mexico’s Sistema Huautla in April.

Graham says she had to stave off panic to keep water levels steady in the one-inch pocket of air that allowed her and her team to swim out of the cave after being trapped for four days due to torrential flooding.

She says an international team of rescuers could face additional challenges as they work to devise a path to safety through the “chocolate milk”-coloured waters trapping a dozen boys, aged 11 to 16, and their soccer coach in a cave in northern Thailand.

A Thai official said Tuesday that the 13 are mostly in stable medical condition, but a forecast of heavy rains could mean the boys will have to dive out of the cave if flooding worsens.

Christian Stenner of the Alberta/B.C. Cave Rescue Service says coaching the young men to swim out of the cave could prove to be risky under conditions that would challenge even an experienced diver.

Stenner says the safest option may be to wait for water levels to recede—but spending an extended period of time underground could take a psychological toll on the group.

—with files from the Associated Press