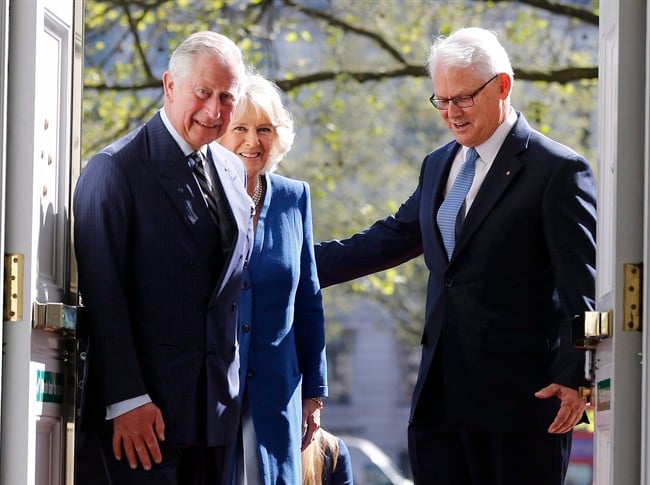 Britain’s Prince Charles, left, and Camilla, Dutchess of Cornwall are welcomed by High Commissioner for Canada Gordon Campbell during a visit to Canada House in London, Wednesday, May 4, 2016. Canada’s top diplomat in Britain says it is time to take the vitriol out of the referendum campaign over leaving the European Union following the killing of a British parliamentarian this week. THE CANADIAN PRESS/AP/Frank Augstein, Pool

OTTAWA – Canada’s top diplomat in Britain says it is time to take the vitriol out of the referendum campaign over leaving the European Union following the killing of a British parliamentarian this week.

Canadian High Commissioner Gordon Campbell says the British public needs to confront the fact that if they vote to leave the EU, it will disrupt not only their country, but the world at large, wreaking havoc on the global economy for a generation.

Campbell also warned that a British decision to leave — known as a Brexit — could stall the implementation of the Canada-EU free trade deal and imperil the jobs of thousands of Canadians working in hundreds of British companies.

MORE: What Brexit could mean for the world

But in an exclusive interview with The Canadian Press, Campbell — a former British Columbia premier — warned of dire and unpredictable economic consequences of a Brexit, for Britain, Canada and the world.

“This is generational impact on the United Kingdom, Europe and the world’s economies.”

Campbell said the killing Thursday of British Labour MP Jo Cox, a 41-year-old mother of two, underscored the need for Britons to start treating the referendum as an important public policy question rather than an emotional question of national identity.

“The details of what happened to Jo Cox are still emerging, but I will say that I do hope that this true tragedy has led a lot of public figures here in the U.K. to think long and hard about the tone of the debate around the EU referendum,” Campbell said.

“I think there is a consensus that the vitriol needs to stop and this needs to be less about personal, emotional attacks and more about the realities of what a vote to leave the European Union will mean for the British people and the world.”

Police were trying to assess the motive of the man who fatally shot and stabbed Cox outside a library in her northern England riding, but her death ground the referendum campaign to a halt.

The suspended campaign appeared to spark a modest rebound in the London’s FTSE and the British pound, leading some analysts to conclude Cox’s death might be taking the wind out of the Brexit side.

Prior to that, both had been in sharp decline because of the uncertainty caused by the referendum, which Campbell said could only be taken as a harbinger of bad economic fallout if Britons vote to leave the EU on Thursday.

Campbell said a British departure from the EU would have negative consequences for 10,000 Canadian jobs in Britain as well as for the hundreds of companies doing business there. And he speculated it could stall the implementation of the Canada-EU free trade deal, known as CETA. Both sides hope to ratify the pact this fall, and are hoping to see it implemented in early 2017.

That timeline could be disrupted, said Campbell.

“If Europe is engaged in what would be a very challenging negotiation about the United Kingdom leaving, they’re certainly not going be nearly as focused on engaging in ratifying the Comprehensive Economic and Trade Agreement,” said Campbell.

“There’s been a lot of glib talk about how quickly trade agreements can be made.”

Campbell referenced Trudeau’s recent remark to Reuters news agency that it would be difficult for Britain to replicate its own version of CETA, which was a dig at Brexit supporters.

“It would be an Olympic gold in trade negotiations if it took them less than a decade,” Campbell said.

Campbell is nearing the end of a five-year term as Canada’s envoy to Britain and he says he has seen the best the country had to offer in recent years. It hosted the Olympics, celebrated the Queen’s 90th birthday and London flourished as a “truly international city.”

But all of that is at risk now, he said, because of the movement to take Britain out of the EU.

“All that Canada can really do now is say to people in the United Kingdom: you have an important role to play in the world, you’ve always played it, and we encourage you to continue to play it,” Campbell said.

“And the way to have the strongest impact and the most long-term, beneficial impact, not just for Europe and the United Kingdom, but for the world, is to remain and reform and to lead, not to leave.”