Canadian man among those rescued after Greek ferry fire 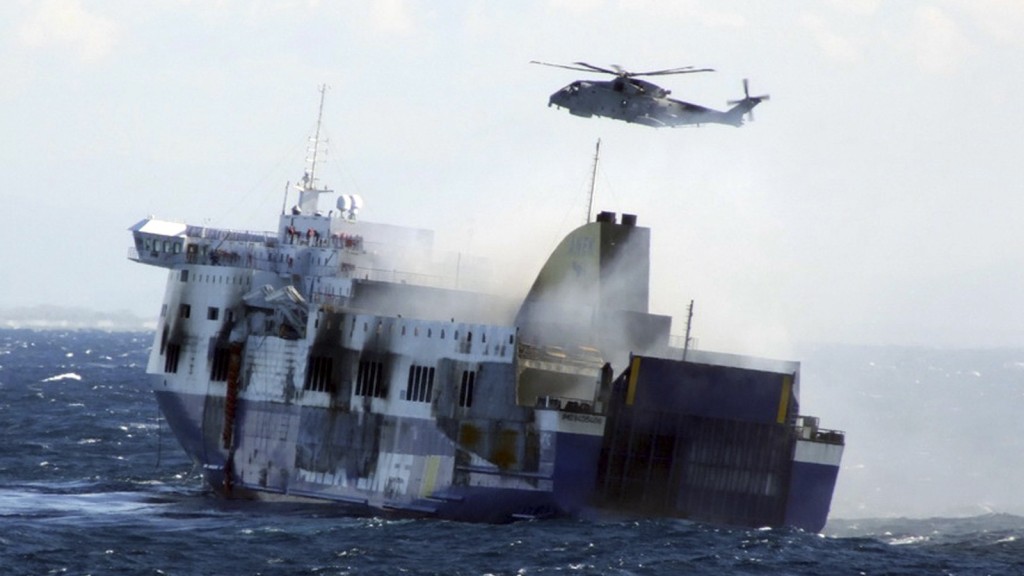 OTTAWA – A Canadian is among hundreds of people saved in a dramatic rescue at sea after a fire on board a ferry travelling between Greece and Italy.

A spokesperson for the Foreign Affairs Department says they are aware of a Canadian who was on board the Norman Atlantic when it caught fire Sunday and has now been rescued.

But the government isn’t releasing any further information.

A spokesperson at the Greek embassy in Ottawa said earlier Monday that one Canadian, identified as N. Pejcinovksi, was listed among the 422 passengers and 56 crew on the ship’s manifest but his whereabouts were unknown.

The fire broke out before dawn Sunday on a car deck of the Italian-flagged Norman Atlantic on a journey from the Greek port of Patras to Ancona in Italy. At least 10 people died.

Fighting high winds and stormy seas, rescue crews on Monday completed evacuating 427 people from the boat as survivors told of a frantic rush to escape, caught among flames, pelting rain and passengers who fought others for rescue.

One Greek man died on Sunday while trying to get into a lifeboat, with his wife, who survived; and four bodies were recovered from the sea on Monday.

The circumstances and identities of the other three fatalities are unknown.

The search in the Adriatic Sea for others continues amid serious discrepancies in the ship’s manifest, which contained 478 names.

The original ferry manifest listed 422 passengers and 56 crew members, but Italian navy Adm. Giovanni Pettorino said 80 of those rescued did not appear on it at all.

Canadian foreign affairs spokesperson Caitlin Workman said no further information is being released on the rescued Canadian for privacy reasons.

“Our thoughts and deepest sympathies are with those affected by the ferry incident in the Adriatic Sea,” she said in an email.

“Consular officials have been in contact with Greek and Italian officials and stand ready to provide consular assistance if and as required,” she added.

The cause of the fire is under investigation.

– with files from The Associated Press