Scott Gilmore: By Saturday afternoon, before the new Catalonian nation was even a day old, it was obvious it did not exist 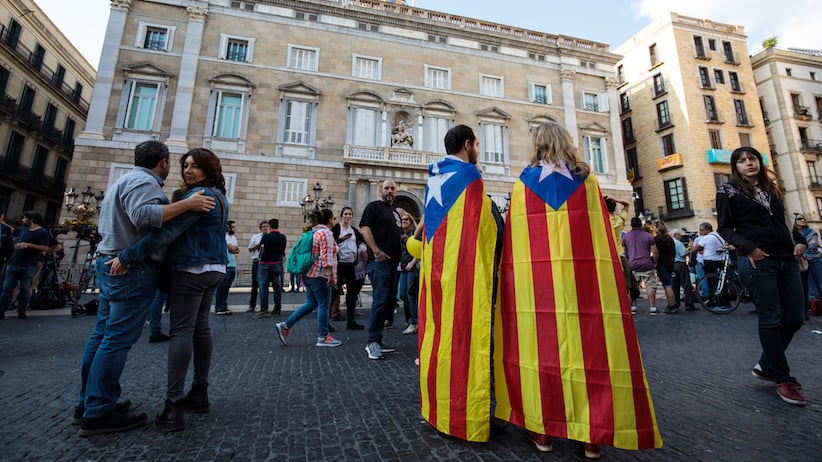 Sometimes history is unstoppable. Chairman Mao’s Long March. The civil rights movement. American independence. These faced obstacles and suffered reverses, some took decades to succeed, but in hindsight the ultimate arrival was inevitable.

The birth of a free Catalan nation looks like that. For the last 2,000 years the people living between the Pyrenees and the Mediterranean have outlasted the Romans, the Visigoths, the Franks, Napoleon, and Franco. Their cities have been burned, their language banned, even their names were taken away. Yet they survived, even flourished. Catalans built a vibrant culture and patiently, over centuries, nurtured dreams of independence. And with each generation, that goal has come closer and closer.

Forty years ago they took back their language. Eleven years ago they won limited autonomy. Last year, when that autonomy was threatened, the Catalan President Carles Puigdemont defied Madrid and called a referendum on independence. A month ago, they voted and even riot police could not stop them. Two days ago, when hopeful crowds gathered outside their parliament, the politicians inside unilaterally declared independence. It took them centuries to get there, but the Catalan dream had arrived.

The view from Madrid was different. There, the Spanish government reacted swiftly and hard. The Senate gave Prime Minister Mariano Rajoy unprecedented powers to prevent the state from splitting away, which he promptly used. The Catalan parliament was dissolved, and the cabinet was dismissed. The head of the local police was fired. The Spanish State prosecutor announced he plans to arrest Puigdemont for ‘rebellion’, a crime that brings 30 years in jail.

I wonder what Garibaldi, de Gaulle, or Washington would have done at this critical moment. I can picture them defiantly proclaiming Catalonia’s freedom from a flag-draped balcony, or barricading the streets and seizing government offices. Maybe they would have led a march to confront and disarm the federal police encircling their parliament.

Puigdemont? He joined some friends for lunch at the Plaça del Vi, a pleasant bistro known for its extensive wine cellar.

His cabinet accepted their removal from office quietly. The parliamentarians stepped aside without any notable protest. The chief of the Catalan police left his office as ordered. And Puigdemont issued a pre-recorded address where he called for “patience, endurance and perspective,” but proposed nothing concrete. By Saturday afternoon, before the new Catalonian nation was even a day old, it was obvious it did not exist.

The night before, I had been drinking with some young Catalan professionals and entrepreneurs. They were celebrating their newfound independence over tapas and beers. The economy would be fine, they told me, even if 1,500 corporations had pulled out citing political instability. They patiently walked me through the historic inevitability of the Catalan nation and eloquently described their coalition of romantic dreamers, economic pragmatists, and those who were simply offended by Madrid’s anti-democratic behaviour. I ate my fill of calamari and toasted their good fortune one last time before calling it a night.

READ: If Spain wants to lose Catalonia, it will keep up its brutality

The next evening, after news of Madrid’s harsh counter-measures had broken, I met Dr. Pere Vilanova, in the well-appointed bar of the Pulitzer Hotel. Vilanova is a constitutional expert and a well-known media commentator. Over scotch and soda we had a long conversation about Catalonia’s future. He listed the many systemic barriers to independence. For example, Puigdemont had no money to start a new government—Madrid pays the salaries of all the local teachers, civil servants, police, and firemen. And not a single country had recognized their declaration of independence, not even the mischievous Russians. It was clear momentum had already shifted decisively in Madrid’s favour.

I asked why there were no protests, no energetic defence of the new nation. Vilanova looked around at the posh bar, and laughed. “Life is good here and protesting is exhausting.” He explained that there had been regular demonstrations for weeks, but eventually people get tired. This is not Palestine or Timor; they are not fighting for their lives. Catalonians are among the wealthiest people in the world, and enjoy a quality of life unsurpassed anywhere. “Do Catalans realize they have already lost?” I asked. “No,” he answered. “When you believe in a beautiful idea, it is like a love affair. You only hear what you want to hear, only believe what you want to believe.” They think they’re free.

I walked back through the Plaça de Catalunya, the recent site of huge demonstrations. It was empty. A few journalists stood by their video cameras, waiting for something to film. A little further away La Rambla was packed as cheerful couples enjoyed the mild night air, shopped and dined. My phone was beeping. Some new Catalan friends wanted me to join them for drinks and to talk independence. But I was tired and had a flight to catch in the morning. “Next time,” I texted back. And went up into my hotel.