Charity towards refugees sinks in the tide of humanity 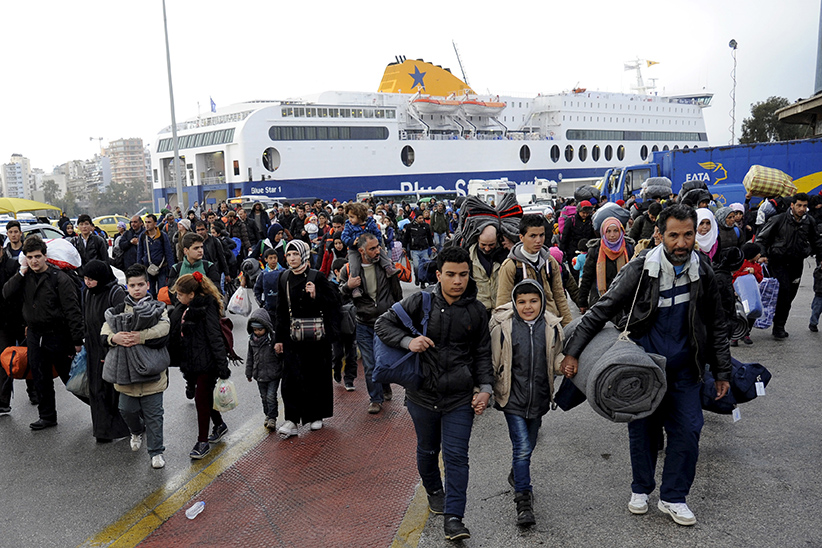 Refugees and migrants walk after disembarking from the passenger ferry Blue Star 1 at the port of Piraeus, near Athens, Greece, March 8, 2016. REUTERS/Michalis Karagiannis

“It might be nice if [the U.S.] paid a little more attention to the world,” Prime Minister Justin Trudeau said the other day on 60 Minutes. “Having a little more of an awareness of what’s going on in the rest of the world, I think is, is what many Canadians would hope for Americans.”

In that spirit, let’s you and I pay a little more attention to the world.

Let’s concentrate on Europe, which is in some danger of bursting over the influx of refugees from Syria and other countries. The numbers involved are staggering, and can at times be difficult to hear over the sound of self-congratulation on this side of the Atlantic.

Yes, Canada has accepted more than 26,000 refugees. It has been a compelling display of Canada’s generosity and openness. I have met no European official who has anything but praise for Canada’s effort. Meanwhile there are three million refugees in Turkey. In January alone, about 70,000 migrants entered Greece along the so-called eastern Mediterranean route. In 2015, about 885,000 people entered the European Union along that route. Most of them continued northward from Greece and into the rest of the continent.

For much of last year, Europe was divided between advocates of openness and welcome, and proponents of a harder line. The leader of the former group was Angela Merkel, the chancellor of Germany. An important ally was Donald Tusk, a former Polish prime minister who is now the president of the European Council and therefore, perhaps, the most important unelected official in the European Union. I use the past tense here because the advocates of openness are close to giving up. It is hard to impose a moral judgment on this choice; the crush of human numbers has done the work.

Last September, the day after little Alan Kurdi’s corpse washed up on a Greek beach, Hungary’s populist prime minister, Viktor Orbán, published an op-ed in a German newspaper calling for Europe to defend itself against the waves of migrants. “Most of them are not Christians, but Muslims,” he wrote. “Is it not worrying in itself that European Christianity is now barely able to keep Europe Christian?”

That same day, Tusk met with Orbán in Brussels. Standing next to Orbán as they met reporters, Tusk lectured his guest on the meaning of Christian charity. “Christianity in a public debate on migration must mean in the first place the readiness to show solidarity and sacrifice. For a Christian it shouldn’t matter what race, religion and nationality the person in need represents.”

I was very much #TeamTusk in that dispute, so it has been fascinating to watch the Pole as he realizes Europe is failing to resettle migrants in large numbers. Last spring, as it became clear 2015 would be the biggest year ever for migrant arrivals in Europe, the European Council hatched a plan to send 40,000 migrants from Italy and Greece to other European Union member states. By September it was obvious this was far too small a number, and the target was quadrupled to 160,000. Some of the relocated migrants would come from Hungary, to take pressure off and calm Orbán.

Six months later, 660 migrants have been moved out of Italy, Greece and Hungary to the rest of Europe. Bulgaria has taken two, Spain 18. The relocation program isn’t working.

Hence the recent change in Tusk’s tone. “I want to appeal to all potential illegal economic migrants, wherever you are from: Do not come to Europe,” he said in Athens at the beginning of this month. “Do not risk your lives and your money. It is all for nothing.”

Now, it’s worth noting that he intended this message only for people who enter Europe looking for better jobs. Most of the migrants are legitimate refugees fleeing for their lives. But it can be hard, under the crush of numbers, to tell the difference. And the rules are quickly changing for everyone.

Lately Tusk has hoped to buy peace by sending tens of thousands of migrants back to Turkey—outside the EU’s borders—in return for billions of euros in EU resettlement funding. The Turks have no trouble spotting a desperate customer. This week, Ahmet Davutoglu, the country’s prime minister, upped the ante. He wants $8.8 billion for resettlement, double the previous offer. He wants the EU to be a visa-free zone for Turks by June. And he wants Turkey’s application to join the EU fast-tracked. Taken together it would be sweet reward for a regime that, only last week, seized control of Turkey’s largest newspaper, replaced its critical staff with lapdogs, and pelted protesters with rubber bullets and tear gas. Normally the EU frowns on such behaviour. This month it hasn’t the luxury.

The lead negotiator on the EU side for the deal with Turkey was Angela Merkel. Last year she staked her career on keeping Europe open to newcomers. This year she is trying to save her skin, and Europe’s.

Canadian officials have had little to say about any of this. Last month, Foreign Affairs Minister Stéphane Dion was in Turkey, hoping his hosts might be in the mood to buy Bombardier C-series jetliners. Perhaps the Turks found the distraction amusing.