Charlie Hebdo issue with Prophet Muhammad on cover sells out

Front page of magazine depicts a weeping Muhammad, holding a sign that reads 'I am Charlie' 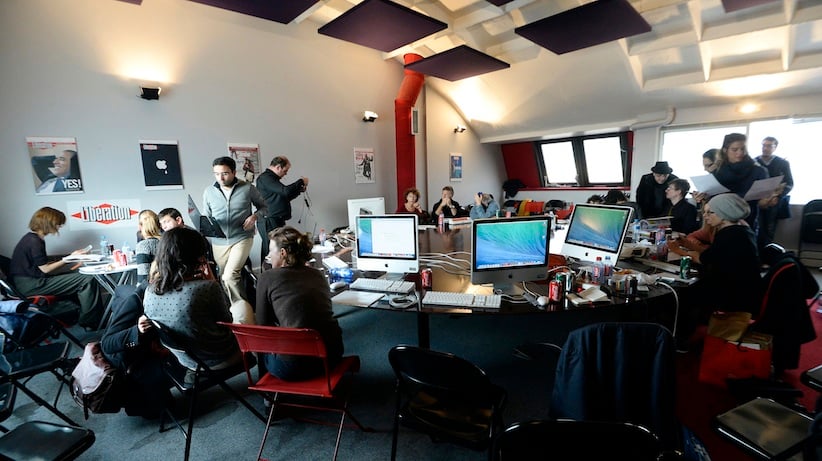 This photo from the weekend shows staff of Charlie Hebdo and the daily Liberation newspaper at Liberation headquarters. (AP photo)

PARIS – Charlie Hebdo’s defiant new issue sold out before dawn around Paris on Wednesday, with scuffles at kiosks over dwindling copies of the paper fronting the Prophet Muhammad. In the city still shaken by the deaths of 17 people at the hands of Islamic extremists, a controversial comic who appeared to be praising the men was taken into custody.

The issue’s cover is with a caricature of the Prophet Muhammad, with and a double-page spread inside claiming that more turned out Sunday to back the satirical weekly “than for Mass.”

Twelve people died when two masked gunmen assaulted the newspaper’s offices on Jan. 7, including much of the editorial staff and two police. It was the beginning of three days of terror around Paris that saw 17 people killed before the three Islamic extremist attackers were gunned down by security forces.

Charlie Hebdo had faced repeated threats for depictions of the prophet, and its editor and his police bodyguard were the first to die. 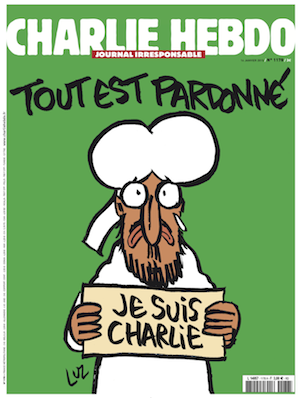 The newspaper Liberation hosted Charlie Hebdo staff as they prepared the issue and is handling its special 3 million-copy print run in numerous languages. The cover shows a weeping Muhammad, holding a sign saying “I am Charlie” with the words “All is forgiven” above him.

Charlie Hedbo‘s past caricatures of the Muslim prophet appear to have prompted last week’s attacks, part of the worst terrorist rampage in France in decades. Some witnesses reported that the attackers at the paper’s offices shouted “We have avenged the prophet.” Many Muslims believe all images of the prophet are blasphemous.

On Wednesday, the new issue vanished from kiosks immediately. Some newsstand operators said they expected more copies to arrive on Thursday. One kiosk near the Champs Elysees, open at 6 a.m., was sold out by 6:05. Another, near Saint-Lazar, reported fisticuffs among customers.

“Distributing Charlie Hebdo, it warms my heart because we say to ourselves that he is still here, he’s never left,” said Jean-Baptiste Saidi, a van driver delivering copies well before dawn on Wednesday.

Meanwhile, France’s government is preparing new anti-terrorism measures and says it want to crack down on anyone who defends terrorism.

The French comic Dieudonne has been detained for defending terrorism after posting comments on Facebook – since deleted – that seemed to support the attackers who left 17 dead in the Paris region.

Dieudonne, who popularized an arm gesture that resembles a Nazi salute and who has been convicted repeatedly of racism and anti-Semitism, was in detention Wednesday. His provocative performances were banned last year but he has a core following among many of France’s disaffected young people.

On Monday, a man who praised the attackers in a drunken rant while resisting arrest was sentenced to four years in prison.

Related reading: 10 essential reads on the the Paris shootings