Chicago Police shooting: 'So many questions and no answers' 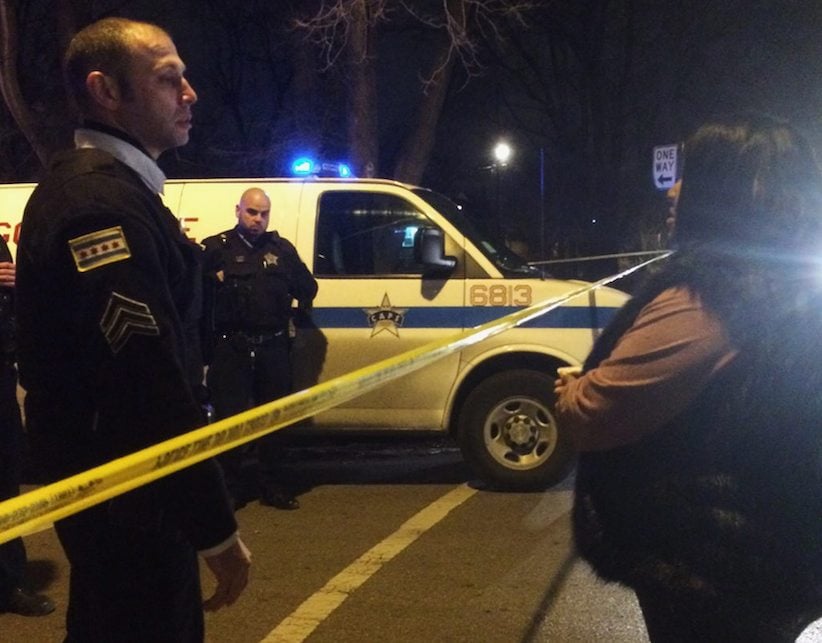 A Chicago police sergeant speaks with a relative of a man who was killed by a police officer in the West Garfield Park neighborhood in Chicago, early Saturday, Dec. 26, 2015.  (Megan Crepeau/Chicago Tribune via AP)

CHICAGO — A Chicago police officer responding to a domestic disturbance call accidentally shot and killed a 55-year-old woman, who was among two people fatally wounded by police gunfire, the department said late Saturday.

Relatives said Bettie Jones lived downstairs from Quintonio LeGrier, the 19-year-old who prompted the initial call to police and who also was killed.

Officers who responded to the call “were confronted by a combative subject resulting in the discharging of the officer’s weapon,” the Chicago Police Department said in a brief statement.

“The 55-year-old female victim was accidentally struck and tragically killed,” reads the statement, which extends “deepest condolences to the victim’s family and friends.”

The shooting happened around 4:25 a.m., police said. The Cook County medical examiner’s office and family members said Jones, a mother of five who had hosted family for Christmas, and LeGrier, a college student home for holiday break, were pronounced dead at hospitals within an hour.

Both Jones and LeGrier were black, the medical examiner’s office said. Police did not immediately disclose the race of the officer, saying in a statement only that officers involved in the incident will be placed on administrative duties for 30 days while “training and fitness for duty requirements can be conducted.”

The shooting comes amid ongoing scrutiny of police after a series of deaths of African-Americans at the hands of officers gave rise to the Black Lives Matter movement. The Chicago Police Department also is under a federal civil rights investigation that will look into patterns of racial disparity in the use of force.

It is not clear whether there are any video recordings of Saturday’s shootings.

LeGrier’s father told the Chicago Sun-Times he had invited his son to a family holiday gathering before the shooting but the younger man chose not to go. Antonio LeGrier said when he returned to his second-floor apartment early Saturday, his son appeared to be a “little agitated.”

The elder LeGrier said he heard loud banging on his locked bedroom door around 4:15 a.m. and that his son said, “You’re not going to scare me.” He said his son tried to bust the door open, but he kept him from doing so and called police.

The father said he called Jones, who lived a floor below, and warned her that his son was a “little irate” and not to open the door unless police arrived. He said Jones told him she saw his son outside with a baseball bat.

When police arrived, Antonio LeGrier said he heard Jones yell, “Whoa, Whoa Whoa!” He said he heard gunshots as he made his way down from the second floor and then saw his son and Jones lying in the foyer.

“I identified myself as the father and I held my hands out,” he said.

Jones’ daughter, Latisha Jones, told the Sun-Times and Chicago Tribune that she woke up when she heard gunshots. She said she walked to the front door and saw her mother bleeding on the ground.

Antonio LeGrier said police later told him that Quintonio LeGrier was shot seven times, and that he had called 911 before his father did.

Chicago police on Saturday afternoon referred Associated Press requests for additional comment to the Independent Police Review Authority, the city’s main police oversight agency. IPRA spokesman Larry Merritt said it was “very early on in the investigation” and he couldn’t release further details. Autopsies, which would determine how many times LeGrier and Jones were shot, were not scheduled Saturday.

Antonio LeGrier told the Sun-Times that his son had emotional problems after spending most of his childhood in foster care. “Did it warrant him getting shot and killed? I don’t believe it,” the elder LeGrier said.

LeGrier described his son as a “whiz kid” and said he was home on break from Northern Illinois University, where he majored in electrical engineering technology.

LeGrier’s mother, Janet Cooksey, told the Chicago Tribune police didn’t have to react the way they did.

“We’re thinking the police are going to service us, take him to the hospital. They took his life,” said Cooksey, who was not present at the time of the shooting.

Cooksey said she wants a personal apology from Emanuel for what happened to her only child.

Emanuel’s office issued a statement from the mayor late Saturday that noted the review authority’s investigation and said evidence would be shared with the county prosecutor’s office.

“Anytime an officer uses force the public deserves answers, and regardless of the circumstances, we all grieve anytime there is a loss of life in our city,” Emanuel said in the statement.

Bettie Jones’ brother, Melvin Jones, told the Tribune his sister celebrated “an excellent” Christmas at her apartment Friday with about 15 other relatives.

He said she lived there with her boyfriend and was the mother of four daughters and a son ranging in age from 19 to 38.

“There are so many questions and no answers,” Melvin Jones said. “I’m numb right now. Right now there’s a whole lot of anger, a whole lot of tears. … I don’t have time to feel. I have a funeral to prepare.”