Shootings in Chicago are up 50 per cent this year as the city grapples with a surge in violence. A criminologist explains what's behind the increase. 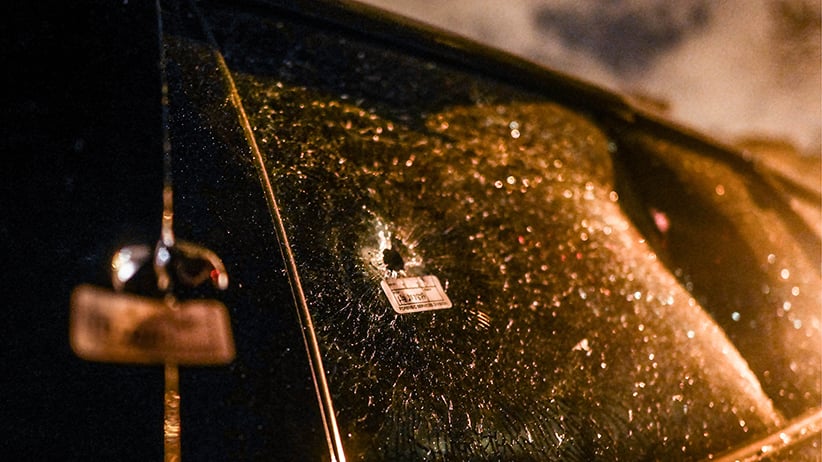 A bullet hole in a Pontiac Grand Prix belonging to Precious Land, a mother of three who has been in a coma ever since a shooting over the Memorial Day weekend in Chicago, May 28, 2016. (Julie Turkewitz/The New York Times/REDUX)

Donald Trump isn’t one for factual accuracy. He’s wrong when he says America is the highest-taxed country in the world. He has no evidence to support his claims the election is being rigged. He’s even incorrect when he says he always opposed the Iraq War. But there is one common claim that he’s repeated throughout his campaign that is absolutely right: thousands of people have been shot in Chicago this year.

“You walk down the street, you get shot,” Trump said at the first presidential debate in September. Hyperbole, sure, but one might not want to test his theory. Thirty-seven people were shot in Chicago last weekend alone. Six of them died.

In one weekend. So far this year, shootings are up nearly 50 per cent from 2015.

In a city where the homicide count climbs by an average of two murders a day, Chicago recently cross a depressing threshold. As of the morning of Halloween, the number of murders in the city so far this year stood at 609, according to a live count maintained by local news site DNAInfo: 34 by stabbing, 10 by assault, 542 from a bullet and 23 more deaths marked as “other.” With still two months left in 2016, the number of homicides in Chicago—a metropolitan area with a population of 9.9 million—has surpassed number of reported homicides in all of Canada in 2015.

And if today ends like any other day in Chicago, 12 more people will have been shot, setting a pace for well over 4,000 shootings this year. It’s that kind of violence that has earned Chicago its tragic nickname: Chi-raq.

“I’m in the media with great regularity, but it’s never to talk about how wonderful and peaceful the streets of Chicago are,” says Arthur Lurigio, a professor of psychology and criminal justice at Loyola University Chicago.

“African-Americans with the wherewithal to leave are doing so,” he says. Between 2000 and 2010, the city’s black population declined by more than 180,000. “Those are mostly the African-Americans leaving because of crime and poor schools, and they have the financial means to leave.” As such, the intergenerational poverty concentrated in poor areas lingers on.

Another challenge, Lurigio says, came when the city tore down some of its public-housing developments where gangs would congregate. The young men had to relocate to government-supported housing in poor communities of Chicago and its suburbs. “When they went into those neighbourhoods, they didn’t relinquish their gang membership,” Lurigio says. “They became a threat to the gangs who were already occupying those communities.” Not only that, the gangs began to splinter to the point that a Chicago Police Department gang audit found the city had more than 600 gang factions—and they’re better connected than ever before.

So where are the police to handle all this? “Trust in the police is at an all-time low,” Lurigio adds, with stories of police abuse or brutality against unarmed black men regularly grabbing headlines.

For all that, experts still can’t say for sure why this year in particular is so horrible for murders. But as bad as this year’s spate of homicides seems, Chicago is still better off than when the city suffered through raging gang wars in the 1970s and early 1990s.

Trump might slam Obama for the thousands who have died in Chicago since he became president, but the fact is Chicago has had its lowest homicide rate under Obama than any other president’s tenure since Lyndon B. Johnson in the 1960s. “Trump is talking about the city as a whole as if there’s anarchy, which is absolutely ridiculous,” Lurigio says. “Yes, Chicago is violent, but it’s pockets of the city and not the city as a whole.”

This post has been updated from an earlier version