China the winner after pointless Canada-U.S. meeting on North Korea

For Canada, the main legacy of the forum for peace on the Korean Peninsula may be increasingly thorny relations with the world’s emerging superpower 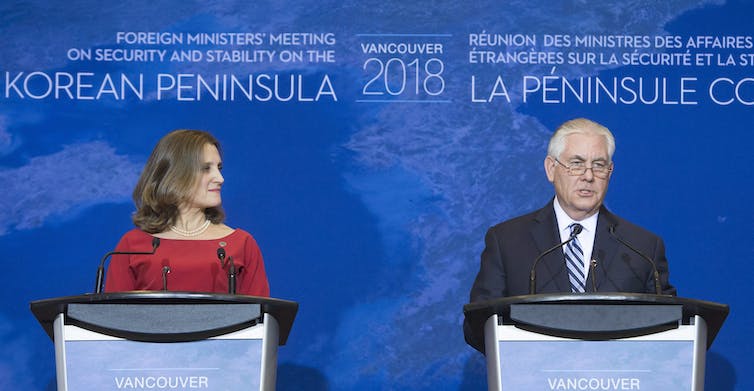 Foreign Affairs Minister Chrystia Freeland and U.S. Secretary of State Rex Tillerson speak following a meeting on the security and stability on the Korean Peninsula in Vancouver. THE CANADIAN PRESS/Jonathan Hayward

This week’s foreign ministers’ meeting on security and stability on the Korean Peninsula in Vancouver may have done global tensions more harm than good. If so, China will wait patiently to collect its geo-political winnings.

And for Canada, the main legacy of the forum may be increasingly thorny relations with the world’s emerging superpower.

As Tillerson emphasized: “The purpose of the maximum pressure campaign is intended to cause North Korea to engage as a credible negotiating partner in addressing a pathway to a denuclearization of the peninsula.”

Of course, the people who will feel the deepest pain of this maximum pressure are the most vulnerable of North Korea’s population. Malnourished children will have less to eat, and the sick and elderly will lose access to life-saving medicines.

It’s unlikely that North Korea’s economy will be seriously destabilized by international sanctions this time. What is the more likely outcome? It’s hard to imagine Kim Jong-un surrendering his nuclear weapons. That would undercut his hold on power and ultimately lead to his appearance before the International Criminal Court for crimes against humanity.

A more plausible response would be a more frenzied brandishing of his nuclear arsenal, threatening the unthinkable in order to save himself from the humiliation of a trial in The Hague followed by a lifetime of incarceration.

Canada, meanwhile, has more to calculate than global diplomacy. The Chinese Communists are not as forgiving and broad-minded.

If Beijing finds that the Canadian conference leads to “hostile” foreign naval vessels patrolling East Asian waters, intercepting ships smuggling Chinese oil and other sanction-bucking commodities into North Korea, then the legacy of Vancouver will be its chilling effect on Canada-China relations. So much for Canada being favoured by Chinese trade concessions.

But an international armada enforcing sanctions may never materialize, as few nations want to incur China’s wrath by participating in such interdiction on the High Seas.

READ: The case for using military force against North Korea

North Korea will also continue to relentlessly refine its weapon capability to, before long, achieve the undisputed ability to explode a nuclear device over any city in the United States.

WATCH: Canada and partners tell North Korea to give up nuclear weapons

And when that capability is proven, the global game changes dramatically. At a minimum, American allies will doubt if the United States can truly defend them if North Korea can launch a ballistic missile on U.S. territory.

These allies would start to see Beijing as a better bet in terms of their own security. Last weekend’s chaotic false alarm in Hawaii showed that the U.S. has made few preparations against such an outcome.

China seems content to wait patiently for the Korean crisis to come to a head before offering to collaborate in changing the Pyongyang regime and dismantling the nuclear weapons on Chinese terms.

Already, Beijing is demanding that the U.S. cease all joint military exercises with South Korea as the price of another round of Chinese-mediated dialogue with North Korea. The next demand would be that the U.S. withdraw its troops based in South Korea and Japan. Then comes abrogation of America’s commitment to defend Taiwan.

China is confident the U.S. will not exercise its only other option when the Vancouver meeting’s “maximum pressure” fails to bring North Korea to heel — reviving the Korean War by initiating military action to cow the North Koreans into submission.

God willing, the horrendous slaughter that would ensue will give pause to even the “very stable genius” in Washington.

There are various ways this could end for Canada.

We are now tied to the fate of Tillerson, though he may be on the way out if hawkish White House hardliners gain the upper hand when the secretary of state’s approach to Pyongyang proves ineffective. If so, Canada’s relations with Trump’s White House may also be a casualty of the Vancouver meeting.

China is playing very high-stakes poker on the Korean Peninsula, but the game serves Beijing’s ardently nationalistic geo-political ambitions if it gets the U.S. out of its East Asian backyard.

For China, this is no longer a matter of if, but when and how.