Syrian refugees find themselves lonely, and perplexed, at the Arctic Circle 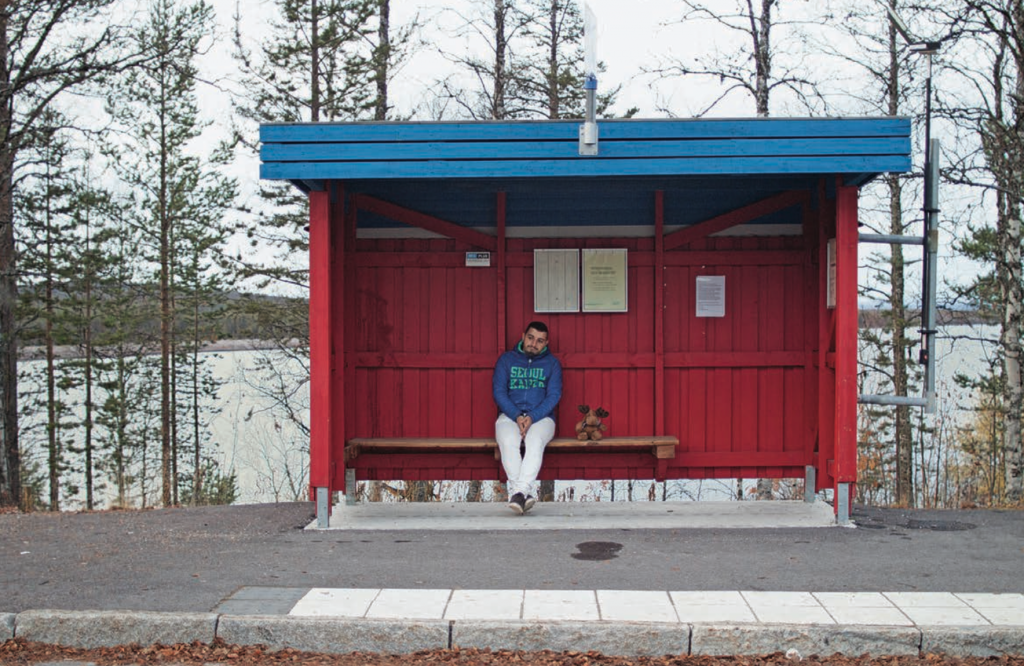 Mohammad Mahsoun doesn’t understand what he’s looking at. His morning began the way his mornings often do. He woke up. He climbed out of bed. He got dressed. He left his bedroom. He stepped outside. But when he saw it—whatever it was—he gasped, blinked, gasped again: a delicate, translucent film clung to the grass, the trees, the road, everything.

Is it some kind of chemical fertilizer? he wondered. Vandalism? The end of the world?

It’s not. It’s the season’s first frost, and Mahsoun, a 26-year-old Syrian from Aleppo with a master’s in engineering, will wake up to many more: He’s close to the Arctic Circle, where Sweden houses thousands of refugees. Throughout Europe’s deepening refugee crisis, the Swedish government has been uniquely generous: It predicts it will receive 190,000 asylum applications in 2015, and offers permanent residency to all Syrian asylum seekers who have come to Sweden. But some refugees find that coming to Sweden is easier than integrating within it.

For Mahsoun, the road north was wearying, but the road he arrived at is lonely and barren. In Greece, he slept in the street and cheap hotels. In Austria, he ducked on and off a train, escaping an irate official by turning his jacket inside out and faking a nap in a sleeper compartment. And in Germany and beyond, he ran: Encircled by kind Germans to protect him and his friends from packs of neo-Nazis, then escorted onto a boat that ferried him to Sweden, he travelled farther and farther and farther north, until the government finally sent him up by the E45 highway that cuts through the village of Porjus. There, at an asylum centre on the side of the road, he stopped.

Related: These refugees made it. But they’re still being left behind.

It takes 10 minutes to walk this deserted road through Porjus. At one end of town stands an apartment for northern-lights chasers; on the other lies the Hotell Porjus. Between them live 350 villagers and 150 refugees.

Painted a sunny yellow, Hotell Porjus is the warmest-looking building in town. In the dining hall, the meals are regular; along the corridors, the floors are clean. This is no vacation spot, though. On the ground floor, two Syrian men sit in an empty room, headphones stuffed in their ears as they stare at the walls. One floor above, Mahsoun’s roommate spends his days sleeping, talking about going back to Syria and about a burning pain in his arm, then sleeping some more. Kids sift aimlessly through a deck of cards, playing a game with no rules. They’d use the Internet to talk to loved ones, if the Internet worked reliably here.

Some could wait in this temporary centre a long time before they receive permanent residency. Mahsoun worries about his friends who he says have lived here for a year. Sweden has a severe housing shortage, so the government contracts private companies to turn dozens of hotels, ski resorts and sanatoriums into migrant centres. The Porjus centre is run by a music mogul, Bert Karlsson. In the early 1990s, Karlsson founded a Swedish anti-immigration political party. Now, he’s Sweden’s biggest provider of temporary asylum centres. Swedes say that he’s perfected the Ikea model, charging lower prices for a sort of decent living.

“It’s fine,” says Mahsoun. Fine, for a village where you have to order wine by Wednesday to have it delivered on Friday. A kid folds his cards. 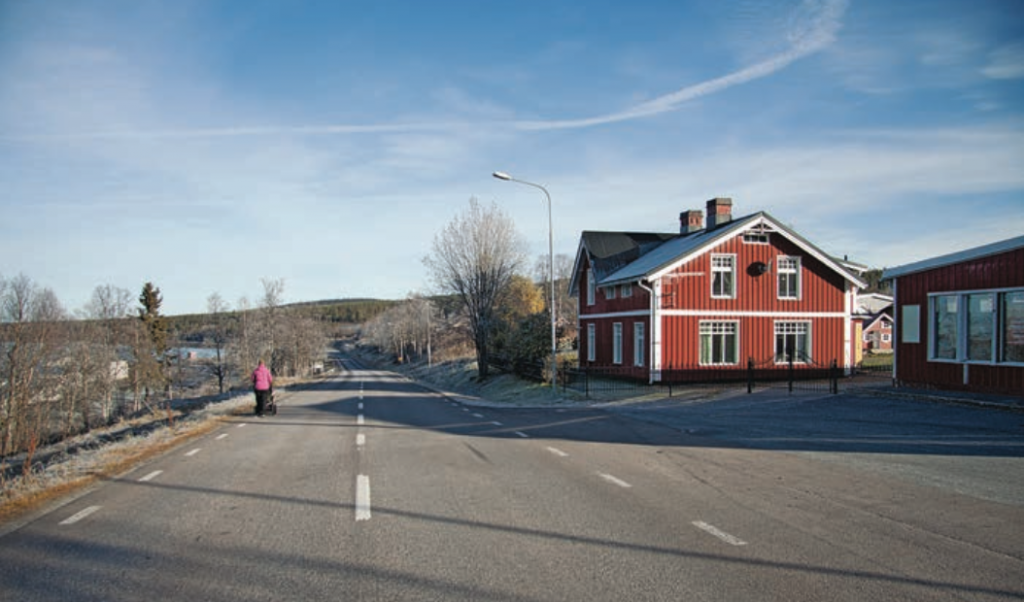 It takes 10 minutes to walk the deserted road through Porjus, Sweden. (Photograph by Shannon Gormley)

A bit down the road, Mahsoun’s neighbour works in a wooden A-frame. National flags are strung across its forested yard, reindeer pelts are piled high on its stoop, and a sign posted to an old ironing table announces the souvenir shop. Inside, behind piles of stuffed animals, plastic key chains, wooden-handled knives and old radio wires is Asbjörn Thunborg, a 21-year-old political science student and fur trader.

His father, now deceased, started the shop in 1969. Thunborg Senior sold it all: smoked fish, handicrafts, boats. But in the 1990s, along with the other townsfolk, he gave supplies to refugees streaming from the Balkans down the road into Porjus. This isn’t the Arctic village’s first refugee crisis.

Back then, refugees lived among locals in apartments. Still, cultural integration was never easy here.
“If you go to a bus stop, you will see people standing two metres from each other. Stockholm is the most anonymous city in Europe. You don’t know your neighbour. Why should you say hello to your neighbour?” Thunborg explains.

Mahsoun is unperturbed. Maybe they can hang out some time, he suggests to the Swede. Yes, maybe, Thunborg replies. But he often has class in nearby Luleå. Mahsoun nods. Thoughtful and hardworking, he dreams of doing his Ph.D.

The village library is a two-minute trudge down the highway from the old Thunborg shop. Mahsoun stands on its wooden steps, unsure whether it’s open. It’s quiet—but then, everything’s quiet in Porjus. He gets lucky. The library closes for all but three hours each week, but, this time, the door swings wide. Mahsoun nods to the startled librarians, and scans the bookcases for a word he recognizes. He wouldn’t be able to read most Swedish children’s books. He asks the librarians if they have anything in English, and they pull four books out from under the counter, their entire stock. A Stephen King thriller tempts him, but he picks up one by a Swedish author. “I want to learn more about the Swedish people,” Mahsoun tells the librarians.

First, Mahsoun will have to learn more of the Swedish language: To build a career, immigrants and refugees must attain high language proficiency. The Swedish job market is tough, even though Sweden has created unique employment programs for refugees. The Swedish language is tough, too. The Porjus centre provides language classes, and Mahsoun takes them double time. But the teacher is Irish and only learned Swedish himself a few years ago.

On his way out of the library, Mahsoun calls out a tentative Swedish goodbye. The librarians look confused. He repeats himself, louder. They look more confused. When they realize what he’s trying to say, they teach the words to him again, softening his Syrian-Irish accent.

A few doors down from the library, the refugee centre’s Swedish teacher, Kevin Murphy, sits at Porjus’s only restaurant, Oya’s Grillbar. Murphy moved from Dublin for his Swedish girlfriend and stayed for the wide open spaces. He tracks bear for fun and once climbed out of a ditch full of six feet of snow, but his language students are afraid of deer. They’re not on an Arctic adventure. They’re in limbo.

“You have the hotel here, you have the village here,” Murphy says. “[The refugees] want to talk, they want to integrate, they want to speak Swedish, but the chance doesn’t really come up to interact with people.” To pass the time, he encourages his bored students to explore. “Go get lost in the woods!” he says to Mahsoun.

Go get lost indeed, other locals say. Mathias Persson, a tall and handsome man in coveralls, sits alone in a corner at Oya’s. Northerners are naturally isolated, he explains. They keep to themselves. “We don’t really want anyone from the outside coming,” he explains. Persson thinks refugees don’t integrate because they only talk to each other. But he doesn’t talk much to them, either, he says.

Some villagers empathize with the secluded occupants of Hotell Porjus. The restaurant’s owner, Oya Schmidt, is originally from Thailand, but moved closer to her mother in Porjus about a decade ago. Villagers are always stopping by her bar to gossip, but she still doesn’t feel at home. Though her café is so close to her house that she can see its front door from her restaurant’s back window, in the winter, she drives to work. It’s too cold here. Too dark, also. She warns Mahsoun that some people kill themselves around these parts when the days are short. He tells her he’ll keep that in mind.

Outside Oya’s, it’s so cold, Mahsoun sees his breath; so dark, he can’t see the ground. The road slopes down from the restaurant, leading to the large white sign marking the outer limit of Porjus. There, beside a frigid Arctic lake, he looks up at the sky, blinks and looks again. This, he’s come to understand. The northern lights push through the thick night, glowing green enough to illuminate a slice of remote highway. He’s reached the end of the road for now, but maybe not forever.