Peace is winning. Even in Colombia.

A deal to end war in Colombia faltered, but for a moment the Americas saw total peace for the first time 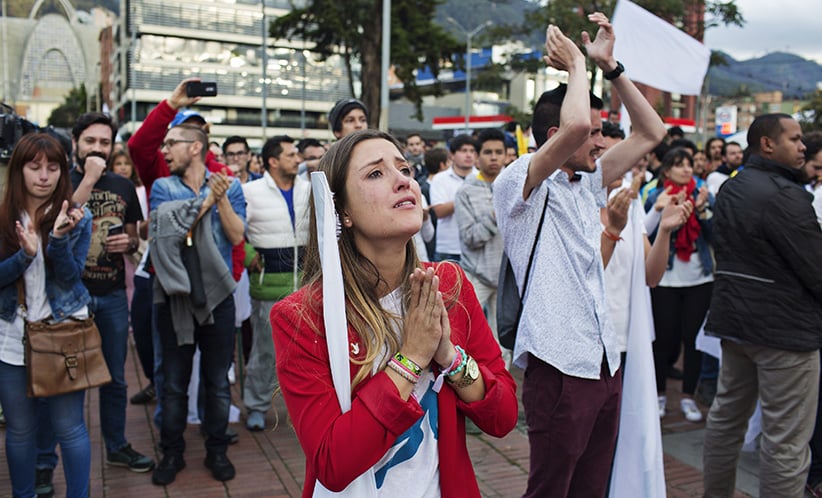 People react after learning about the rejection of a peace deal with the Revolutionary Armed Forces of Colombia (FARC) following a plebiscite in Bogota, Colombia, on Sunday, Oct. 2, 2016. (Nicolo Filippo Rosso/Bloomberg)

This was supposed to be a good news column.

I flew down to Colombia last week to write about the historic peace accord reached between the government and the guerilla movement, FARC. After half a century of bloody fighting, the two sides had reached an agreement to lay down weapons and begin a nationwide process of reconciliation and reconstruction.

The fighting began in 1964, sparked by the social injustices inflicted on the poor living in the countryside. The global tensions of the Cold War, regional rivalries, the drug trade and domestic political feuds all provided more fuel for the fire as it became one of the bloodiest conflicts in the Americas. Five million people were displaced and more than 220,000 (the vast majority civilians) were killed.

While other regional conflicts faded, this one stubbornly persisted until it became the last ongoing war in the Americas. Slowly, though, tectonic shifts eventually brought both sides to the negotiating table. As Colombia became more liberal and democratic, its government felt it had a legitimate mandate to seek peace. An increasingly successful military campaign had also dramatically reduced the FARC’s bargaining power. At the same time, the guerilla’s long-time ally, the left-wing government in Venezuela, struggled to provide assistance as its own economy and political system collapsed.

So the guerillas and the government began to secretly meet in Cuba. Over the course of four years, they were able to work out a broad and complex peace deal. The final agreement included ambitious timelines to disarm the rebels, to assist them in resettling and re-training, and to begin a process of truth and reconciliation that would heal the wounds left by decades of war.

On Monday last week, in Cartagena, officials from around the world, including Canadian Foreign Minister Stéphane Dion, flew in to watch FARC leader Rodrigo Londoño Echeverri (known by his nom de guerre Timochenko) and the Colombian President Juan Manuel Santos sign the accord. The event was televised live across the country, and in Bogota, I joined thousands who had gathered in the central Plaza de Bolivar to sing, dance and celebrate the landmark moment, not just for Colombia, but for the entire region. When the ceremony concluded in Cartagena, it marked the first time in recorded history that the Western hemisphere was entirely at peace.

Consider that for a moment. The last thousand years have been marked by one conflict after another, from the Mayan conquests, to the Aztecs, the Conquistadors, the French and Indian Wars, the Civil War, the countless coups, rebellions and border skirmishes. The history of North and South America has been relentlessly bloody and violent. Until last Monday.

Peace in the Americas fits into a larger global trend. Since 1945, the entire world has experienced a persistent decline in conflict and in the number and rate of violent deaths. Like Colombia, most of the planet is becoming more democratic, informed, connected and wealthier, all factors that have contributed to more stability and less war.

But there are setbacks. In Colombia, the historic moment lasted only a few days. Although he was not legally required, Santos had insisted that a national referendum was required to ratify the accord. Government officials fanned out across the country to promote the deal, and explain how the FARC would be demobilized, and how the government would spend the “peace dividend.”

One of their rallies took place in a remote frontier town called Villahermosa. The town is in the shadow of the Macarena mountains, surrounded by rich pasture land where herds of cattle are tended by cowboy-hatted llaneros on horseback. Colombian soldiers patrolled the roads on foot in single file, carefully watching the tree line and searching passing cars.

The people in this region of Colombia have suffered during the fighting. The townspeople endured years of extortion and kidnapping by the FARC, and the violence that comes with narco-trafficking and efforts to stop it. In the countryside, the farmers had to also endure the heavy-handed tactics of the Colombian military, who suspected everyone of harbouring guerillas, and who tended to shoot first, then ask questions.

While I stood and watched a couple of local girls stand on stage and sing an off-key ode to the peace agreement, a policeman named José walked up and started to chat, in English. Surprised, I asked him where he learned it and he proudly pointed up into the mountains and said, “In the jungle, when I was a hostage.” The FARC had kidnapped José, and moved him from camp to camp, keeping him in wire cages, for 13 years. When he eventually escaped, on foot, the guerrillas hunted him relentlessly through the jungle. On the run alone, he found and befriended a small wild pig, and the two of them emerged a month later to civilization and freedom.

José rejoined the police force, but instead of nurturing a desire for vengeance, he began to work on efforts to foster communication with the guerillas. Eventually he met the FARC fighters who tried to kill him as he fled, and greeted them with a hug. And now? José was at the rally to support the peace deal. In spite of all the lost years, and the trauma, he wanted reconciliation, not retribution. (And the pig? He’s still alive, lives with José, and is much bigger.)

According to the referendum results, his attitude is common in those regions that suffered the worst from the FARC. In the rural areas that had seen the most killing, displacement and kidnapping, the majority of voters chose peace. But in the cities, and in those regions furthest from the fighting, voters rejected the peace deal. In Bogota, I kept hearing that while people wanted peace, they also wanted “justice.” The guerillas had financed their war mostly through criminal activities. Worse, they were responsible for many massacres and other war crimes. One of the major concessions made by government negotiators was to offer the FARC a blanket amnesty.

This was too much to swallow for many Colombians, and the No side won the referendum:  50.2 per cent to 49.8 per cent. This surprised most observers, but it echoed a phenomena I’ve seen elsewhere, such as in East Timor and Liberia: those who have suffered the worst are willing to forgive the most—if it will bring peace.

Leaders of the political opposition campaigned against the deal, and some voters may have seen this as a referendum on the current government. Whatever the reason, the agreement was not ratified and it has left everyone worrying about what happens next.

Before the vote, government officials warned a victory for the No side would automatically end the ceasefire and that attempts to restart negotiations would be years away. However, the night of the referendum, a sombre Santos announced that he would be renewing efforts in Cuba to engage the FARC. Similarly, the guerilla leader Timochenko reiterated that regardless of the vote count, the FARC is now a political not a military organization and he considers the peace agreement to still be in place.

It may not be that simple, though. With a public that has rejected the peace deal and demanded accountability, a weak economy, and a force of still-armed rebels sitting in the jungle, Timochenko and Santos will have a difficult time navigating the weeks and months ahead. The odds would seem to be against them. But it is unlikely that any renewed fighting in Colombia would spill beyond its borders, and the rest of the Americas remain at peace. Worldwide, the historical march toward a more stable and less violent era continues. Perhaps this is a good news column after all. You just need to stand back a bit and squint your eyes.