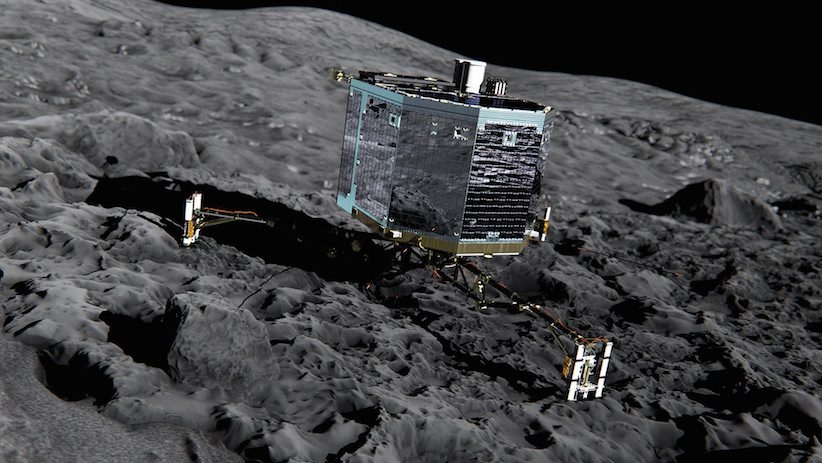 This artist impression of Philae (front view) on the surface of comet 67P/Churyumov-Gerasimenko. The comet lander Philae has awakened from a seven-month hibernation and managed to communicate with Earth for more than a minute, the European Space Agency said. (ESA/ATG medialab/ESA via AP)

BERLIN — The Philae spacecraft has been in touch with Earth from a speeding comet for the second time since waking up a few days ago, mission control said Monday, and scientists hope to improve communications with the lander by shifting the trajectory of its mother ship.

Philae in November became the first spacecraft ever to settle on a comet when it touched down on icy 67P/Churyumov-Gerasimenko, but it managed to send data to Earth only for about 60 hours before running out of power.

Scientists were elated this weekend when, as the comet approached the sun, Philae’s solar panels absorbed enough light to recharge its main battery and wake the lander up.

Philae broke its silence on Saturday by sending a signal back to Earth via Rosetta, its mother spacecraft, which is between 200 and 240 kilometres (124 and 150 miles) away from the comet.

Philae then got in touch again on Sunday night, sending back five packets of data, said Sylvain Lodiot, the spacecraft operations manager for Rosetta. Still, that was much less data than the previous night, he said.

It’s not clear why the connection was less stable, but scientists suspect a slight increase in the lander’s distance from Rosetta may have been a factor.

“Now we have the green light from all the scientists and from the mission manager to optimize everything we can do for Philae contact,” Lodiot told The Associated Press by telephone.

On Wednesday, scientists plan a manoeuvr to move Rosetta closer, reducing the distance to Philae as little as 180 kilometres (112 miles), something they had planned to do regardless of Philae’s status, he said.

For the time being, the washing machine-size lander is only sending back what controllers describe as housekeeping and systems data. To be able to get more, scientists will need to improve communications and send it new commands.

Scientists hope that Philae’s restart will allow them to clear up the mystery of where exactly on the 4-kilometre (2 1/2-mile)-wide comet the probe landed.