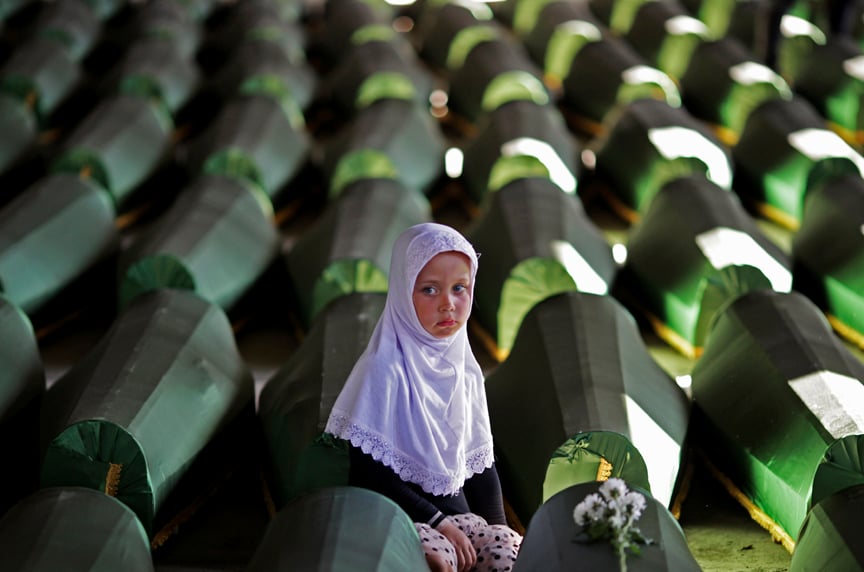 SREBRENICA, Bosnia – Prosecutors on Wednesday made Serbia’s first arrests of people suspected of carrying out killings in the Srebrenica massacre, The Associated Press has learned. It is a milestone in healing the wounds of Europe’s worst civilian slaughter since World War II.

Serbian police arrested seven men accused of taking part in the slaughter of more than 1,000 Muslims at a warehouse on the outskirts of Srebrenica, a joint team of Serbian and Bosnian prosecutors told the AP. Altogether, more than 8,000 Bosnian Muslims were killed in the eastern Bosnian enclave by the Serbs in 1995 – the only atrocity in Europe to be labeled genocide by the United Nations since World War II.

Chief Serbian War Crimes Prosecutor Vladimir Vukcevic told the AP that authorities had sought to arrest eight suspects in pre-dawn raids at different locations in Serbia on Wednesday, but that one is on the run.

“More people have been in our focus, but we have managed to detain seven out of eight suspects so far,” Vukcevic said. “They are former members of a special brigade of the Bosnian Serb police.”

Serbia in the past has put on trial men who took a group of prisoners away from Srebrenica to be killed. And in 2011 it arrested Ratko Mladic – the warlord who masterminded the slaughter – and sent him to an international criminal court in The Hague, Netherlands. But Wednesday’s arrests are Serbia’s first attempt to bring to justice men who got their hands bloody in the killing machine known as the Srebrenica massacre 20 years ago this July.

“It is important to stress that this is the first time that our prosecutor’s office is dealing with the mass killings of civilians and war prisoners in Srebrenica,” Bruno Vekaric, the lead Serb prosecutor in the case, told the AP.

He said Serbia is approaching a key moment in confronting its past.

“We have never dealt with a crime of such proportions,” said Vekaric, Serbia’s deputy War Crimes Prosecutor. “It is very important for Serbia to take a clear position toward Srebrenica through a court process.”

The biggest arrest in the sweep was Nedeljko Milidragovic, the commander dubbed “Nedjo the Butcher,” who went on to become a successful businessman in Serbia, the AP has learned.

The collaboration by prosecutors from former wartime enemies Serbia and Bosnia – supported by the U.N. war crimes tribunal – is the most important case of judicial teamwork helping to heal the festering wounds of the war.

The arrests follow a December sweep by the same team of prosecutors of 15 suspects in a separate wartime atrocity: a massacre that followed an abduction from a Bosnian train.

Many Serbs still view as heroes their wartime leaders – including Mladic and Bosnian Serb President Radovan Karadzic, who are on trial at the U.N. war crimes tribunal – and believe they were victims of an elaborate Western plot.

That makes the current campaign to detain the triggermen deeply sensitive. Serbia’s conservative government is allowing the prosecutions to move forward in part because it’s eager to join the European Union.

That July 1995, Bosnian Serb forces opened the Srebrenica offensive with heavy shelling, ignoring Dutch U.N. peacekeeping troops who were stationed in the town. The Serbs _ led by Mladic _ marched into the town without meeting any resistance. Women sought shelter at the Dutch base, while men and boys fled into the surrounding woods _ to be hunted down by Mladic’s forces.

The men and boys captured by Milidragovic’s men were rounded up and crammed tight into the warehouse with no food or water. There wasn’t even enough room for everyone to sit down as they waited in fear. The killings started in the late afternoon. The killers hurled bombs through the windows and fired round after round of automatic gunfire.

In the morning, witnesses say, Milidragovic ordered the survivors – up to 100 of them – to come out, promising they would be spared. They were not.

Even his troops said they were terrified of the commander.

“I was afraid to look him in the eyes,” one of them said in a deposition.

When the Bosnian war ended in a peace deal in 1995, Milidragovic moved to the Serbian capital, Belgrade. He had two children and built a trucking business that transports construction material – prosecutors say his startup capital came from tens of thousands of dollars taken from his victims’ pockets. He is now 58.

Muriz Sinanovic was among those killed in the warehouse. His wife, Suhra, will never forget his last words before he headed into the forest with thousands of men fleeing Srebrenica.

“Take good care of my children,” Muriz told her as he hugged and kissed Munir, 7, and Emina, 4.

In Muriz’ trousers, discovered with his remains, investigators found his driver’s license and a tobacco box a relative had made for him from cans of U.N. aid. Suhra kept the box, a pinch of tobacco and the cigarette paper inside _ enough for a cigarette he never got to smoke. The box still sits on a shelf in her living room in Sarajevo. When the children were small, they would not let visiting friends touch the tobacco box.

“They said it is a sacred object,” Suhra said.

Muriz’ remains – about half of his body – were found years later in a mass grave.

Forensics experts brought the remains to Suhra in a paper bag. They took out a few bones and showed them to her.

“I did not cry,” she said. “But I almost broke my fingers, twisting them.”