By Janet McConnaughey and Rebecca Santana, The Associated Press July 6, 2016 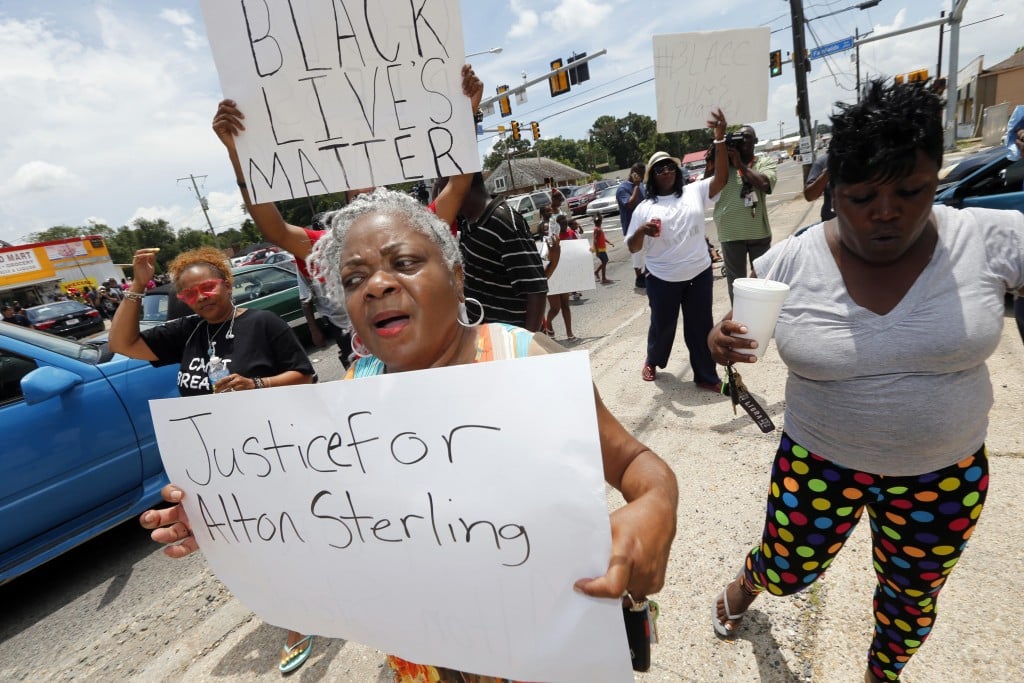 People march outside the Triple S convenience store in Baton Rouge, La., Wednesday, July 6, 2016. Alton Sterling was shot and killed outside the store where he was selling CDs Tuesday by Baton Rouge police. The U.S. Justice Department opened a civil rights investigation Wednesday into the videotaped police killing of Sterling. (AP Photo/Gerald Herbert)

BATON ROUGE, La. – The 37-year-old man killed by Baton Rouge police was a good-humoured person nicknamed “Big Boy” who was orphaned young, loved children and earned a living selling CDs of music downloaded from the internet, said family and friends who knew him.

The U.S. Justice Department is investigating the video-recorded killing of Alton Sterling, a black man who police say had a gun as he wrestled with two white officers outside a convenience store. The shooting as well as two video recordings of the incident have sparked outcry at a time when law enforcement officers nationwide are being carefully watched for their use of force.

Quinyetta McMillon, the mother of Sterling’s teenage son, trembled as she read a statement outside City Hall. Her son, Cameron, 15, broke down in tears and was led away sobbing as his mother spoke.

“The individuals involved in his murder took away a man with children who depended upon their daddy on a daily basis,” she said.

“We grew up in the same household, from babies up until we was adults and moved out on our own,” Larry Sterling said in a phone interview from Baton Rouge.

Larry Sterling and another cousin who grew up in the same household said their cousin had been selling the CDs to make money for about six years.

Sharida Sterling, also interviewed by phone, said that if she couldn’t give him a ride to the convenience store, Alton Sterling would take a bus, carrying a folding table and chair and the box of CDs. She said the store management never had any problems with the informal stand, but police harassed her cousin. She suspected it was because he was black and a “big guy.”

Abdullah Muflahi, the 28-year-old owner of the Triple S 24-hour convenience store where the shooting took place, said Sterling had been selling mixed CDs – rap music and other types of CDs – for a few years outside the front of his store and that he had never presented any problems. He said he used the nickname “Big Boy” for Sterling.

“He was a very happy guy, always laughing, joking around,” he said. “He was never angry, never violent.”

Alton Sterling had five children, 15, 3 and about 10 years old boys, and 1-year-old twins, a boy and a girl, Sharida Sterling said.

Larry Sterling said that, for fun, his cousin would take both their children to a movie or to the park: “The kids loved Alton.”

Police confronted Alton Sterling early Tuesday after an anonymous caller said he had threatened someone with a gun outside the store, authorities said.

In a cellphone video of the incident, two officers can be seen pinning Sterling to the ground. Then someone yelled, “He’s got a gun! Gun!” and gunfire erupted moments later.

At a news conference Wednesday, Baton Rouge Police Chief Carl Dabadie Jr. said that Sterling was armed but that there are still questions about what happened. Larry Sterling said he didn’t know whether his cousin had a permit to carry a concealed weapon.

Muflahi, who shot a video of the shooting incident, said he went outside after the police showed up and saw Alton Sterling being thrown on top of a car hood. He said he saw nothing that might have provoked the police or anything that had happened earlier regarding Sterling to prompt the arrest.

He said Sterling appeared confused as to why the police were confronting him.

“He didn’t even know why they were there. He kept asking them, ‘What did I do wrong?”’ Muflahi said. “I hope we get justice for him.”