Bill to repeal American meat-labelling standards respnds to Canada and Mexico's threat to slap tariffs on a wide range of U.S. goods 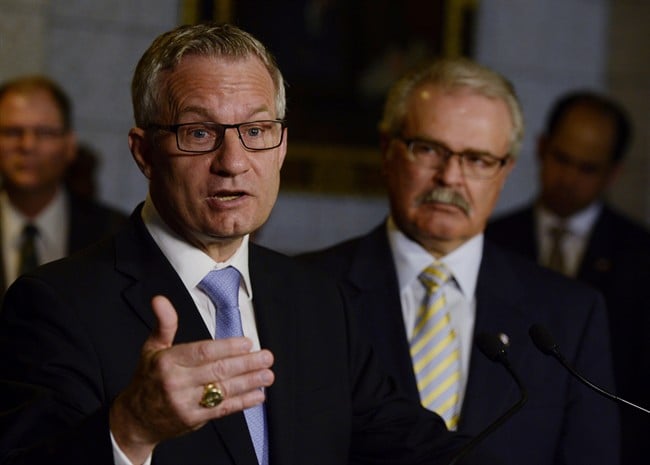 Agriculture Minister Gerry Ritz, right, looks on as International Trade Minister Ed Fast responds to questions about trade with the United States during a news conference on Parliament Hill in Ottawa, Tuesday, May 19, 2015. (Adrian Wyld/CP)

WASHINGTON – A group of U.S. lawmakers hopes to move swiftly to avoid a trade war with Canada.

Members of a congressional committee have introduced a bill that would repeal American meat-labelling standards.

The move from the House agriculture committee came a day after the World Trade Organization found the standards violated international trade law.

Canada and Mexico are seeking to slap tariffs on a wide range of American goods, unless the U.S. Congress changes the rules.

The new bill would repeal the requirement that beef, pork and poultry sold in the U.S. be labelled with the country where the animals were born, raised and slaughtered.

Canada and Mexico blame the rule for reducing exports and major business groups in the U.S. also criticize it for complicating the sorting process.

The Canadian government said Tuesday it is serious about retaliation.

“In light of the WTO’s final decision and due to the fact that this discriminatory measure remains in place, our governments will be seeking authorization from the WTO to take retaliatory measures against U.S. exports,” Agriculture Minister Gerry Ritz said.

The sponsors of the American bill sponsors expressed optimism that it would have enough votes to pass the House of Representatives and then also the Senate, where adoption could be a bit trickier.

If it fails, Canada and Mexico are preparing to impose tariffs on a range of American goods including wine, cereal and frozen orange juice.