Costa Concordia upright off the coast of Giglio Island 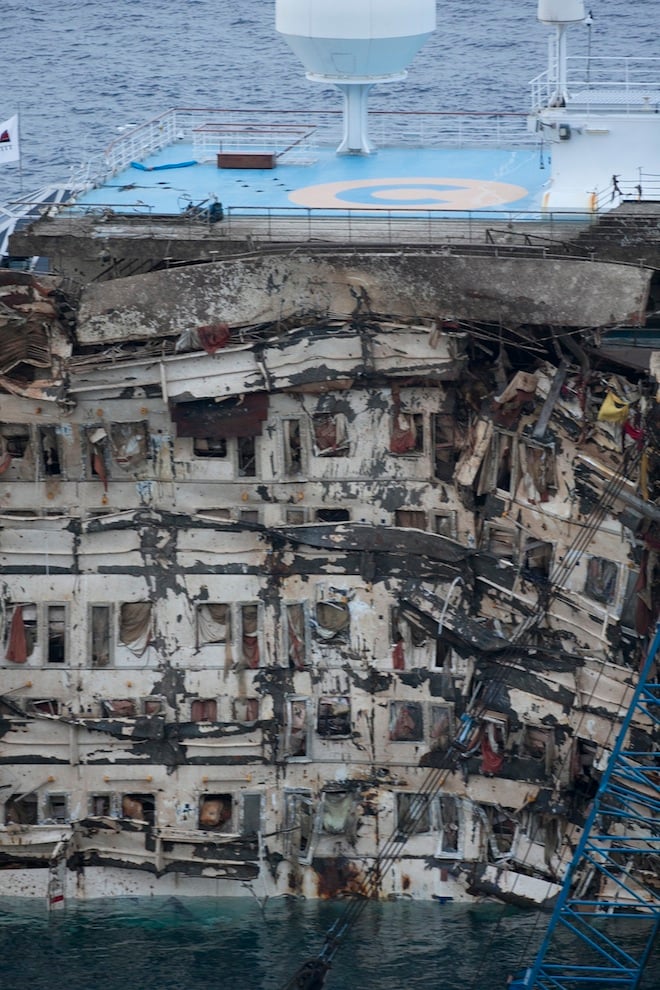 A detail of the right side of the Costa Concordia is seen after it was lifted upright on the Tuscan Island of Giglio, Italy, early Tuesday morning. The crippled cruise ship was pulled completely upright early Tuesday after a complicated, 19-hour operation to wrench it from its side where it capsized last year off Tuscany, with officials declaring it a "perfect" end to a daring and unprecedented engineering feat. (Andrew Medichini/AP Photo)

The BBC has time-lapse footage of the salvage operation here.

There is also THIS via @nowthisnews:

From our archives, author David Newland imagined the Costa Concordia as an Italia opera. Today’s salvage operation undoubtably its encore:

The capsizing of the Costa Concordia has the makings of a modern myth–indeed, it’s an Italian opera in utero, from its Tuscan coastal setting to the madcap antics of its protagonist. Poignancy and hubris intertwine; comic error and tragic consequence rise in contrapuntal glory. The scene is epic–a ship aground on a rocky island–and the characters, unforgettable.

The captain, one Francesco Schettino, is accused of crashing the ship in what appears to be a foolhardy deviation from the safe course. His purpose? To salute, he claims, a fellow captain on the nearby island of Giglio. That’s very bad. He stands further accused of abandoning the vessel during evacuation, apparently spooked by the chaos and confusion, without having first assured the safety of his passengers and crew. That’s even worse.

Tension mounts, but wait, there’s more: can you hear the strings?

It emerged today that there may be a woman involved. There has to be! Dominica Cermotan, a beautiful Moldavian–or is she Tanzanian? we’re not sure –is a dancer by trade. Naturally. She is absent from the list of passengers and crew, but was present on the bridge for the ill-fated sail-by, at least according to some reports.

Cermotan brings both mystery, and motive, to the story by her mere presence, not to mention by her profile picture, and her profession. She will be a soprano. Her song, a variation on Stand By Your Man.

Here we have drama in abundance. Now, we need a script. Ah, but we have it. The ultimate dialogue: Transcripts reveal a shouted duet between Captain Schettino and Port Authority chief Gregorio De Falco that is comic, and tragic, in equal measure.

Managing matters by dispatch as the Costa Concordia lies listing on a reef, De Falco harangues the recalcitrant Schettino over the air in a crackly stream of invective, until the captain meekly agrees to return to his ship.

De Falco’s convincing and unforgettable line is “Vado a bordo, cazzo!” which, as we’ve all now learned, means roughly: “Get the f– aboard!”

(This, we imagine delivered in a basso profundo, shaking the rafters of the opera house as patrons gasp at the gravity of Schettino’s folly, and the righteousness of De Falco’s wrath. Picture the super-titles minus the dashes.)

But does Schettino return to the ship? Dastard, he doesn’t! At least so it’s alleged: Notwithstanding the power of the properly placed imperative by the noble De Falco, Schettino, according to the coast guard, fails to get the f– aboard.

Perhaps it’s because at that point the Costa Concordia is lying on its side on a reef a few hundred metres from the island of Giglio, passengers plunging from the side and lifeboats dangling dangerously in a scene reminiscent of the film Titanic, if not its real-life subject.

Yet, somehow the deputy mayor of the island, Mario Pellegrini has managed to make his way aboard, where he apparently made himself useful for six hours. A baritone for the bold Mr. Pellegrini.

Oh, Schettino: We can already hear your part: a high tenor, (or castrato, if your countrymen have their way) slightly nasal, veering off-pitch perhaps as you complain of the awkwardness, the darkness, the danger. As you claim to have stumbled accidentally into a lifeboat, while your passengers make their own muddled way to shore–one so frightened, we later discover, that she keeps on traveling when she hits the coast of Giglio, all the way back home to Germany before even checking in with authorities.

(Here, perhaps a hint of Wagner, just for geographic resonance. Horns and braids would probably be overdoing it.)

Among the supernumeraries, some were not so lucky. Nearly a dozen drowned.

We already hear the sonorous echoes of Schettino’s name through the ages. First, accusingly, then somberly, regretfully: Oh, Schettino… bravado in authority is a heady, deadly mix.

If Schettino is to be our monster, the antihero of this cautionary tale, then the rest of the cast falls quickly into place: De Falco is the voice of reason, Pellegrini conscience in action, and Cermotan, the bombshell Moldavian/Tanzanian, the love interest. But who, then, who shall be Schettino’s foil? The one who unfairly dies, a victim of another man’s ineptitude.

Poignantly, the situation supplies a ready answer: It’s 38-year-old Hungarian violinist, Sandor Feher, the first of the dead to be identified–by his mother, no less–who must stand in for the sorrow of so many yet to be named or seen.

Sandor Feher’s mother’s part is the one no one wants to play, and yet her song is the one everyone must hear, if we’re to learn anything at all from this real-life fable.

Feher, we discover –in startling contrast to Schettino–helped a group of children into their life preservers, amid the chaos of the evacuation, heroically ensuring their safety, before ducking below decks to retrieve his violin.

Unlike those fortunate children–and unlike Captain Schettino–Sandor Feher never made it to shore alive.

What became of his instrument, we’re not yet sure. But if and when this scandalous tale is staged, Mr. Feher’s violin deserves its due. An instrumental solo: confident, reassuring, gentle but firm, and trailing off unresolved.

For, in fact, it was not the captain, but the musician who went down with his ship.