Could Hong Kong's chief executive be on the way out?

C.Y. Leung was a divisive figure even before the Occupy Central protests. Could his resignation be in store? 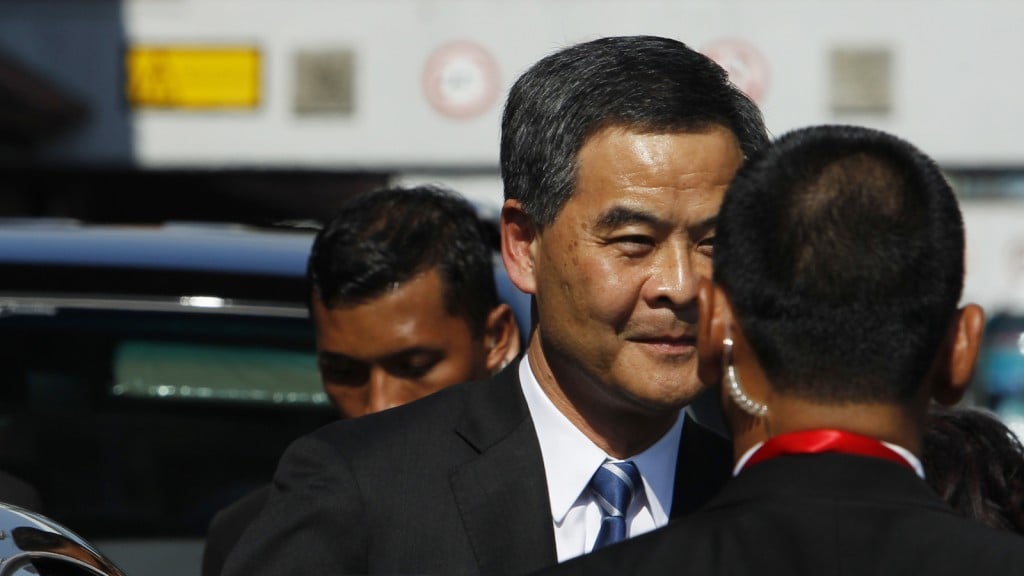 C.Y. Leung, Hong Kong’s chief executive, was a deeply divisive figure even before his government’s heavy-handed response to the Occupy protests.

A poll taken by the University of Hong Kong, just before the tear gas started to fly on Sept. 28, actually gave him a popularity rating of negative 35—the lowest rating pollsters have ever tracked for any local politician since the metropolis was handed back to the Chinese in 1997.

The students who are still crowding downtown streets have made Leung’s resignation one of their principal demands.

Everywhere you go at the three main protest sites there are unflattering caricatures of the chief executive—many playing off his resemblance to Dracula. The language on the signs that target him is mostly unprintable.

Leung has already been forced to the sidelines in the formal negotiations with the protesters, which are scheduled to began late Friday Hong Kong time. It is his far more palatable deputy, Chief Secretary Carrie Lam Cheng Yuet-ngor, who will be sitting on the government side of the table.

The 60-year-old Leung, the son of a policeman, was no one’s first choice for the chief executive position when it came up for grabs in 2012. Chinese authorities in Beijing, and the Hong Kong business elite—or “tycoons” in the local parlance—both preferred another man, Henry Tang, but his candidacy imploded in a scandal over an illegal basement. (Construction is highly regulated in the former colony.)

When Leung eventually won the job, it was in underwhelming fashion, capturing just 689 of the possible 1,200 votes from Hong Kong’s election committee. (Comprised of legislators, religious leaders and representatives of 38 sectors of the economy, the same unwieldy body is at the heart of the current crisis: The Chinese want committee members to select the three chief executive candidates on whom Hong Kong residents will vote in 2017.)

But as unpopular and ineffective as Leung has been in the job, the conventional wisdom was that the Chinese were going to stick by their man-by-default.

There is a new wrinkle however, in the form of an Australian newspaper report that suggests that Leung—a self-styled champion of the “little guy”—received a secret HK$50 million payout from a property firm, just before taking office. The reaction in Hong Kong was swift and angry. On Wednesday evening, several pro-democracy politicians told Occupy demonstrators that they intend to try and impeach Leung over the payments. (The chief executive says the money was related to a prior business dealing and was in no way improper.)

Could this be enough to cost the chief executive his job?

“Beijing is supporting him because of the issue of face,” says Joseph Cheung, chair of the political science department at the City University of Hong Kong. “And they need time to find a successor.”

There is already an established pattern. The former colony’s first chief executive, C.H. Tung, lost his shine after more than 500,000 pro-democracy activists took to the streets in 2003. The writing was on the wall when Hu Jintao, then the president of China, publicly took Tung to task for “poor governance” in late 2004. Within a couple of months, Tung resigned due to a previously undisclosed health issue.

Cheung predicts that C.Y. Leung’s health will also soon take a turn for the worse.