Could insurance bring an end to police violence?

City treasuries absorb the cost of lawsuits against police. If officers had to carry their own coverage, accountability would go way up — and violence would plummet. 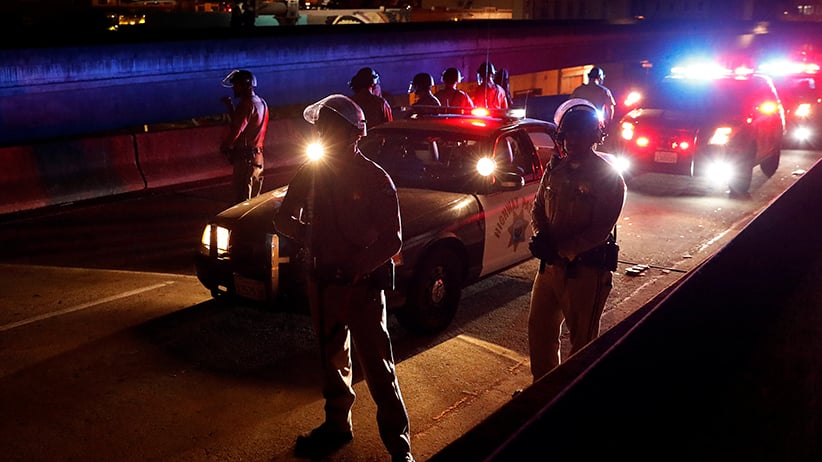 Members of the California Highway Patrol stand guard on a freeway ramp during a protest against the police shootings that lead to two deaths in Louisiana and Minnesota, respectively, in Oakland, California, U.S. July 7, 2016. (Stephen Lam/Reuters)

The escalating tension between Black people and the police sworn to protect and serve them has reached a tipping point. When Darren Wilson shot and killed Mike Brown in 2014, a movement was violently birthed. In the two years since, the conversation on police violence has remained just that — a conversation. While calls for reform have fallen on the deaf ears of government, Black bodies continue to be obliterated under the guise of upholding the law. As of this writing, 136 Black people have been killed by police in 2016. We know the name of the most recent, Philando Castile, because we watched him die in front of his girlfriend and her daughter. According to the little that is known about Micah Xavier Johnson, the ambush shooter who killed five police officers and injured 11 in Dallas, the toxic relationship between Black people and police appears to have disfigured him into hatred by the time he picked up a weapon. After his body, and the bodies of the officers he killed are buried, this toxic relationship will remain.

The moral cowardice of politicians who refuse to pass reform laws has given tacit support as police have continued to profile, harass, intimidate, and kill Black people. In times past, institutional violence could be pushed back by appeals to humanity, and to the law. Segregation, for example, could not withstand the weight of the Constitution, and images of Black protesters being set upon by dogs shamed white people into renouncing the policy. Yet police violence against Black people survived the death of slavery, survived the death of segregation, and is thriving in the age of Twitter hashtags and panel discussions. How can Black men, women, and children resist this form of violence, when violence against them carries the weight of the law itself?

Legal means have failed to yield results. We have seen repeated failures in the justice system; charging a police officer with a crime is a rare thing, and convictions almost never happen. Lawsuits against officers and their departments have been successful, but the financial penalties to police departments have not moved them to change their practices. Neither have they been moved to root out officers with lengthy histories of violence. This is not a matter of revamped police training, or better relationships with Black communities. This is a matter of incentives.

MORE: Could changing one word make it easier to prosecute police?

Since 2000, the city of Toronto has paid $27 million for settlements against the Toronto Police Service. In 2013 alone, the city of Chicago paid more than $81.3 million in fees, settlements, and awards to cover lawsuits against the Chicago Police Department. That pales next to New York City’s 2015 figure of $735 million, which is expected to rise in 2016. In other words, police aren’t refusing to change their practices because those practices work; they aren’t changing them because all of us—Black, white, and everyone else—cover the bill.*

In smaller municipalities, where a multi-million-dollar lawsuit can severely disrupt the local economy, liability insurers have succeeded where others have failed. In Irwindale, Calif., the local police department was forced to implement a “performance improvement plan” to manage the risk their officers brought to the city’s insurer. In Niota, Tenn., two police officers who beat a man during a traffic stop were fired after the municipal insurer threatened to cancel its policy.

In larger cities, lawsuits against police often barely register a blip within multi-billion-dollar budgets. In these cases, the risk is spread among taxpayers, rather than concentrated into the departments, or the officers themselves. Activists in Minneapolis have proposed that officers be required to carry their own liability coverage before putting on the badge. This solution is not only sensible, it’s already standard practice for most professions.

Full disclosure: I work in the corporate office of an insurance company, though not the type that can offer this kind of coverage. My professional standard requires me to have $5 million in liability coverage. Any doctor, lawyer, electrician, or plumber must have their own coverage before they hang their shingle. Yet a police officer can assault a suspect, botch an interrogation, or kill another human being with a vanishingly small prospect of being held accountable. Their insurance is the city treasury.

By continuing to indemnify police, we have locked ourselves into a cycle of grief, despair, and violence. This has to end somewhere, and despite the lies and outrage sure to follow this horrifying week, it will not end through waging war on civilians and communities. We have at least one proven solution to the problem of police violence against Black people. The only question left is whether we would rather watch more people die than use it.

* Correction: A previous version of this post suggested that in 2013, the city of Chicago paid more than $54 million in fees, settlements, and awards to cover lawsuits against the Chicago Police Department. In fact, the number was higher—more than $81.3 million.