Could legalizing the rhino-horn trade save the rhinos? 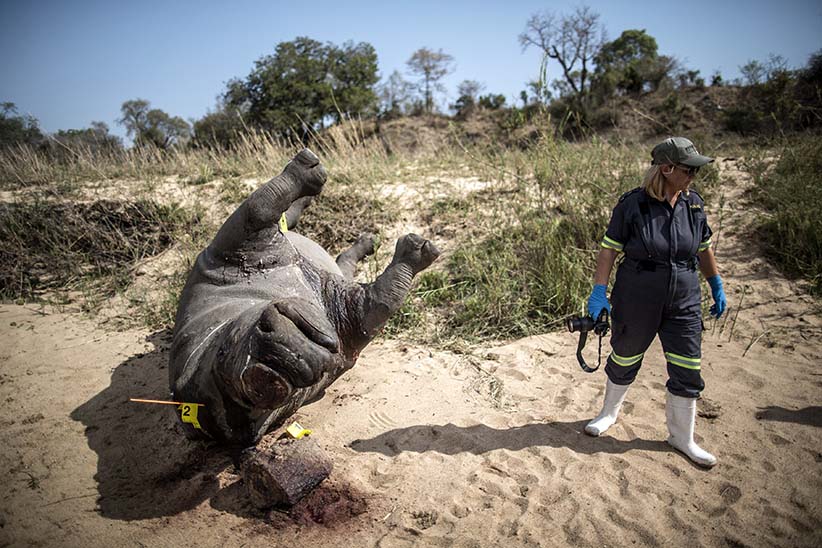 Later this month, rhino breeder John Hume will appear in court to fight the South African government’s ban on the trade in rhino horn. Hume, a private owner of 1,157 rhinos and a four-tonne stockpile of horns worth some US$240 million, says if the rhino-horn trade is not legalized soon, he will no longer be able to afford to keep his animals safe from poachers.

“I have a permanent helicopter, a permanent army,” says Hume, a 73-year-old with a smoky voice who lives in the country’s arid North West province. “Currently, my security costs are three million rand [$300,000] a month,” he tells Maclean’s. “That is not sustainable, so, unless I’m allowed to sell some rhino horn in the near future, I will lose all of my rhinos to poachers in the next 10 years.”

Hume has been breeding rhinos for more than 20 years, but has been harvesting horns only since 2006 to try to thwart poachers who kill rhinos for their horns. He harvests the horns by sedating the rhinos and sawing them off. (They take approximately three years to grow back.) “Like your fingernail or toenail, you don’t cut it down to the quick; you only cut off the dead part,” he explains.

Like other private rhino owners in South Africa, Hume believes it’s his constitutional right to sell the horn, which is used in Asia for its purported medicinal properties. While the rhino-horn trade is currently banned, that hasn’t stopped it from flourishing on the black market. Rhino poaching is now an epidemic, with a growing number of criminal syndicates killing animals to cash in on the horn craze. People such as Hume believe legalization is the answer. “They hate that old saying: ‘If it pays, it stays,’ ” says Hume, “but it’s true. Show me an animal that has gone extinct by being bred profitably.”

Today, what used to be the unthinkable option—legalization—is now gaining traction, as South Africa’s rhino numbers continue to plummet. This May, South Africa’s environment minister, Edna Molewa, reported that in the first four months of 2015, 393 rhinos were killed, an 18 per cent increase from the same period in 2014, a year in which a record number of 1,215 rhinos were killed for their horns. Molewa tried to be upbeat, saying her ministry’s efforts were “bearing fruit,” but admitted: “There are quite a number of areas that need to be looked into.”

That’s putting it mildly. Since the rhino-poaching crisis began in 2008, South Africa has introduced a series of reforms that have done virtually nothing to curb poaching. The government has assembled specialized environmental crime teams. Rhinos have been relocated to safer countries. Defence companies have donated helicopters and sniffer dogs. Money is pouring in. Public awareness has never been higher. Countless “save the rhino” foundations have been set up, and marches are held around the world.

Yet, despite the militarization of the anti-poaching response and the popularization of the rhino cause, the “barbaric attacks” continue unabated. “The problem is that it’s probably going to get significantly worse before it gets better,” says Julian Rademeyer, author of Killing for Profit, a bestselling book about the illegal rhino-horn trade.

The challenge isn’t just global demand, but deep inequality in the region. In Mozambique, which shares the border of the Kruger National Park game reserve with South Africa, impoverished villagers are easily recruited as poachers, says Rademeyer. “I don’t think there are any single answers; there is no magic silver bullet.”

Or is there? Earlier this year, the ministry of the environment established a committee of rhino experts to advise whether it should push for the legalization of the rhino-horn trade at the 2016 Convention on International Trade in Endangered Species of Wild Fauna and Flora (CITES), an international body that regulates the wildlife trade. Environment Minister Molewa has floated the idea before, saying, “We believe it is the right direction,” and, “The model we have is based on pure law of supply and demand. Economics 101.”

It’s a controversial stance. “Free trade would lower the price and potentially increase demand,” says Terri Stander, the shadow environment minister for the country’s official opposition party, the Democratic Alliance. Philip Muruthi, vice-president of the African Wildlife Foundation, agrees. “My honest feeling on the legal trade is that this is not the time; do not trade in a species that we are saying is being poached at unsustainable levels. It sends the wrong message.”

Yet private rhino owners say legalizing the trade would end the monopoly crime syndicates have on the product. Pelham Jones, chairman of the Private Rhino Owners Association, representing more than 290 members with some 5,000 rhinos, says he is advocating for a system that would: see rhino-horn owners registered in a database; hold certificates of ownership for the animals; and embed horns with microchips in order to prove their origin. For Hume, legalization is the only solution. “Let’s put it this way: The demand is currently being supplied by dead rhinos. Do people want to continue with that?”