A new tool in the drug war: marijuana scratch-and-sniff cards

The smell of cultivated marijuana is spreading across England this week, courtesy of Crimestoppers U.K.

The crime-fighting charity is mass mailing scratch-and-sniff cards which replicate the smell of growing cannabis plants to help homeowners identify possible marijuana grow ops in their neighbourhoods. Police will also hand out the cards.

A total of 210,000 scratch-and-sniff cards will be distributed this week in areas of England which Crimestoppers says police have identified as “hot spots” of marijuana cultivation. The cards are more than a publicity gimmick. Crimestoppers U.K. says it hopes citizens will scratch, sniff and possibly call Crimestoppers  to pass along an anonymous tip. 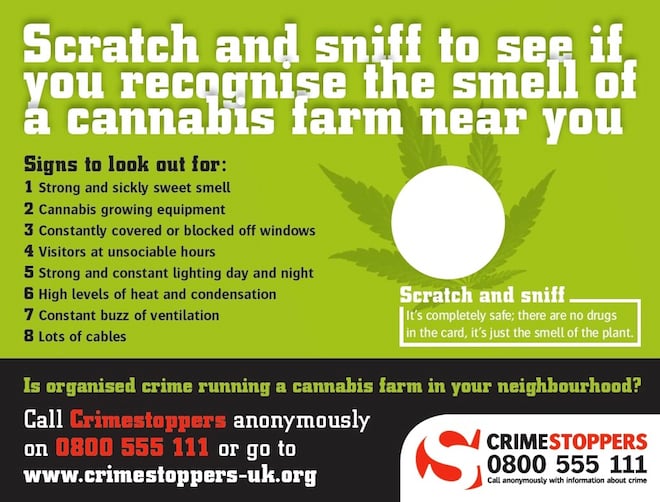 While announcing the campaign Tuesday, Crimestoppers U.K. said British police are seeing “a significant move” of marijuana farms to urban residences from rural, industrial and commercial sites. “Not many people know how to recognize the signs of cannabis cultivation, which is increasingly happening in their neighbourhood,” Crimestoppers U.K. operations director Roger Critchell said in a press release.

As well as producing a whiff of a marijuana plant, the green-and-black cards list eight tell-tale signs a grow op may be in business down the block. This includes No. 1. “Strong and sickly sweet smell” to No. 8. “Lots of cables.”

And no, Aunt Mabel is not going to get high by sniffing the scratch card when it comes in the post. “It’s a replica chemical fragrance,” said Crimestoppers spokesperson Giselle Lares. “There is no actual trace of THC, the active ingredient in real cannabis.”

The smell replicates live mature marijuana plants, not the smell of a burning joint.

Crimestoppers is first targeting the mass mailing to areas where police have busted the most cultivation houses recently — South Yorkshire, West Yorkshire and London. Thirteen regions in all will receive the cards by the end of the week, Lares said. Currently, England is the only part of Britain to get the cards.

Beyond busting local criminals, Crimestoppers says there is a strong connection between organized crime and marijuana grow houses, saying that a grow-op in a residential neighbourhood can lead to increased in crime and violence. A secondary concern is that grow ops illegally tap into the power grid to supply the large amounts of heat and light required for a commercial marijuana farm.

Crimestoppers U.K. picked up the idea of the scratch-and-sniff cannabis cards from its sister organization in marijuana-friendly Holland, where a similar campaign to make the public aware of the dangers of grow ops “had good results” three years ago, Lares said.

Although marijuana is technically illegal in the Netherlands, laws against smoking, buying and selling cannabis have not been enforced there since 1976, and licensed coffee shops are allowed to sell the drug in small amounts.

But police in the Netherlands still crack down on illegal growing operations, in part because the environmentally conscientious Dutch frown on the large amounts of energy involved in commercial marijuana cultivation. Because heavy electrical use is viewed suspiciously by authorities, pot farmers  in the Netherlands often tap into the power grid illegally to get unmetered electricity.

As a result, the Dutch scratch-and-sniff campaign was funded by one of the country’s major power companies, Stedin Netbeheer BV, which estimated it was losing $15 million a year to grow-op energy thieves.

The British scratch-and-sniff campaign is funded by “various police forces and some of our regular partners,” Lares said. Power providers are not involved.

No word yet from Canada’s various Crimestoppers organizations on whether the scratch-and-sniff idea will make it to this side of the Atlantic.