Dallas department seemed to be making progress on race 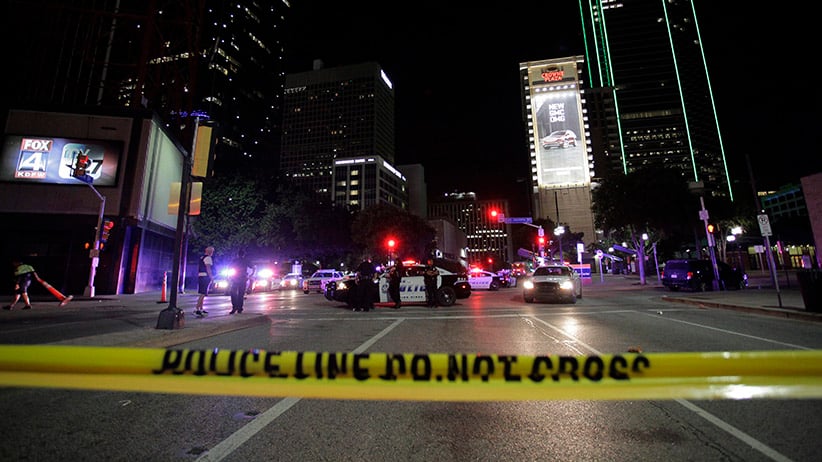 DALLAS — When Micah Johnson opened fire on Dallas police in an act of vengeance against white officers, he was attacking a department whose chief has been lauded across the country for taking bold steps to root out bad cops and repair relations with minorities.

Police Chief David Brown, a black man who pushed through the reforms despite resistance from the rank-and-file, boasted at a news conference Monday that crime, police shootings and excessive-force complaints against the department have all dropped dramatically on his watch.

“This is the best department in the country, and I’m proud to be associated with the men and women of the Dallas Police Department,” he said. “And this tragedy, incident, will not discourage us from continuing the pace of urgency in changing and reforming policing in America.”

Johnson, a black Army veteran who served in Afghanistan, killed five officers in a sniper attack Thursday that he portrayed as payback for the fatal police shootings of black men last week in Baton Rouge, Louisiana, and suburban Minneapolis. The attack ended with Johnson blown up by a bomb delivered by a police robot.

No evidence has come to light to suggest that the 25-year-old Johnson had a grudge specifically against the 3,400-officer Dallas Police Department.

“It’s ironic but predictable that as Dallas has grown it has attracted those desiring to make a political statement using violence on a major stage. Dallas PD is paying the price for problems elsewhere around our country,” said Mohamed Elibiary, a Texas-based Department of Homeland Security adviser.

Brown became chief in 2010, taking over a department that a generation ago had one of the highest rates of civilian shootings in the country. In 2012, his efforts to heal the rift between police and the black community took on greater urgency when the killing of a black man by a white officer triggered widespread protests.

The chief responded by creating a public database to track shootings by police, requiring officers to undergo lethal-force training every two months instead of every two years, and firing 70 officers involved in questionable incidents, including some who faced charges over excessive use of force.

The biggest backlash has come in the last six months, when Brown started a community policing program in mostly Hispanic and black neighbourhoods. He began reassigning officers from desk jobs to foot patrols, a move that was praised by criminal justice experts but angered the police unions, who demanded his resignation.

“We need more boots on the ground, absolutely,” said Mike Mata, vice-president of the Dallas Police Association. “The problem is he was reassigning detectives from the office to back on the streets without any retraining. It’s almost like you set them up for failure.”

The dispute further strained a department that Brown said is one of the lowest-paid in the region, with new recruits making $43,000 a year, and has had such trouble recruiting officers that academy classes are frequently cancelled for lack of participation.

While attending the University of Texas at Austin on a full scholarship, Brown became motivated to enter law enforcement when he returned to Dallas in the early 1980s and found friends from the neighbourhood caught up in a cocaine epidemic. Months after he became chief, his 27-year-old son, David Brown Jr., was shot to death by police after killing two officers.

“I’ve been black a long time,” Brown told reporters Monday. “We’re in a much better place than when I was young man here, but we have more work to do, particularly in my profession.”

In the south Oak Cliff neighbourhood where Brown grew up, for example, 12 officers on the beat regularly introduce themselves to residents — a dramatic shift for a community that had been accustomed only to seeing officers responding to a crime. One of the team’s priorities is to help convicted felons find jobs.

“We knew we couldn’t arrest our way out of the situation,” said Maj. Thomas Castro. Since the community policing strategy was instituted in January, violent crime in the neighbourhood has dropped 10 per cent, he said.

But it has been a gradual process of getting residents accustomed to community policing. Three young men appeared startled Sunday when an officer pulled up in his police car.

“I’m more afraid of the police after the shooting because people are going to feel like everybody’s out for them,” said Anthony Williams, a 23-year-old demolition worker who described being routinely sworn at, frisked and asked for identification simply for sitting outside. “We feel like the biggest gang is the police out here because they face no repercussions.”

Likewise, South Dallas community activist George Battle said there is a “disconnect” between the city’s leaders and communities like his.

“While it’s well-meaning, it doesn’t trickle down into the neighbourhoods, so that tomorrow when a kid gets shot unarmed, that message of unity is not going to reach the people,” he said.

To be sure, police relations are far better than they were 30 years ago, when The Associated Press identified Dallas as the No. 1 city for police shootings. In 1986, Dallas police officers killed or wounded 29 civilians in shootings. It was one of the highest per capita rates among big cities nationally and prompted a congressional hearing on the use of deadly force by police officers.

On Monday, Brown boasted that the city’s crime rate is at a 50-year low and that last year’s murder rate was the fourth-lowest since the department began keeping records in 1930. Shootings by police were down 45 per cent in 2015, and until Thursday there had been only one incident this year in which a suspect was wounded in a confrontation with police, Brown said.

He said the department averaged over 150 to 200 excessive-force complaints every year for 33 years, but had only 14 last year.

During a panel discussion Sunday at Friendship-West, a Baptist megachurch in south Oak Cliff, state Sen. Royce West asked the mostly black audience of several hundred people how they felt about Brown’s performance. They responded with a standing ovation.

But during a question-and-answer session, audience members demanded of the panelists a solution to continued police brutality. Pastor Freddy Haynes said he refused to allow the past week’s tragedies end in a “kumbaya moment.”

“We can’t kiss, hug and make up until there is a rectifying of the structures of hate,” he said from the pulpit to roaring applause.