Micah Johnson laughed and sang at police, and at one point asked how many officers he had shot

By Reese Dunklin and Juliet Linderman, The Associated Press July 10, 2016 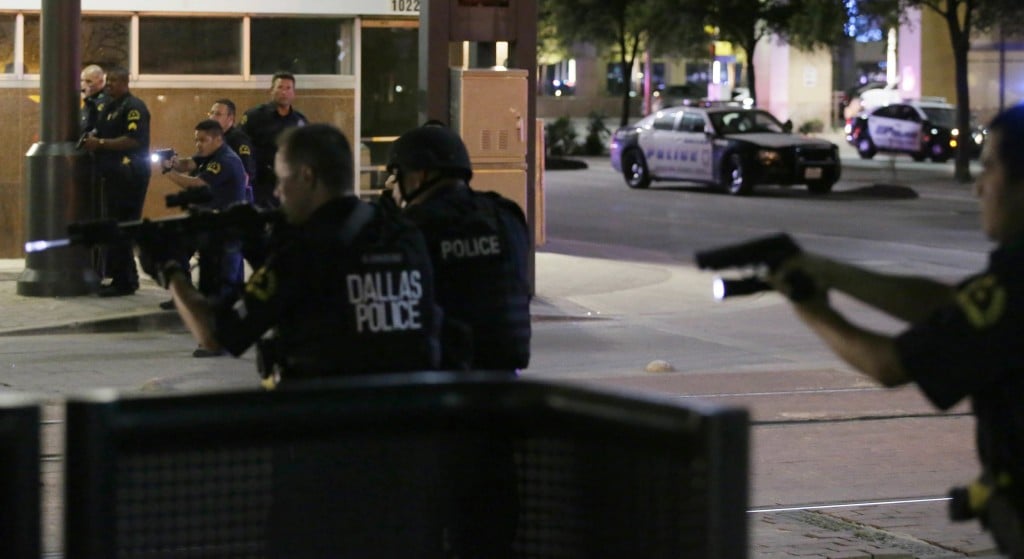 DALLAS – The suspect in the deadly attack on Dallas police taunted authorities during two hours of negotiations, laughing at them, singing and at one point asking how many officers he had shot, the police chief said Sunday.

Micah Johnson, a black Army veteran, insisted on speaking with a black negotiator and wrote in blood on the wall of a parking garage where police cornered and later killed him, David Brown told CNN’s “State of the Union.”

Johnson, who was apparently wounded in a shootout with police, wrote the letters “RB” and other markings, which investigators are trying to decipher by looking through evidence from Johnson’s suburban Dallas home, Brown said.

The chief defended the decision to kill Johnson with a bomb delivered by remote-controlled robot, saying negotiations went nowhere and that officers could not approach him without putting themselves in danger.

Brown said he became increasing concerned that “at a split second, he would charge us and take out many more before we would kill him.”

Johnson had practiced military-style drills in his yard and trained at a private self-defence school that teaches special tactics, including “shooting on the move,” a manoeuvr in which an attacker fires and changes position before firing again.

He received instruction at the Academy of Combative Warrior Arts in the Dallas suburb of Richardson about two years ago, said the school’s founder and chief instructor, Justin J. Everman.

Everman’s statement was corroborated by a police report from May 8, 2015, when someone at a business a short distance away called in a report of several suspicious people in a parked SUV.

The investigating officer closed the case just minutes after arriving at a strip mall. While there, the officer spoke to Johnson, who said he “had just gotten out of a class at a nearby self-defence school.”

Johnson told the officer he was “waiting for his dad to arrive” and pick up his brother. No one else was apparently questioned.

On Friday, Dallas Mayor Mike Rawlings described Johnson as “a mobile shooter” who had written manifestos on how to “shoot and move.”

Authorities have said the gunman kept a journal of combat tactics and had amassed a personal arsenal at his home, including bomb-making materials, rifles and ammunition.

The academy website refers to one of its courses as a “tactical applications program,” or TAP.

“Reality is highly dynamic, you will be drawing your firearm, moving, shooting on the move, fixing malfunctions, etc. all under high levels of stress,” the website says. “Most people never get to train these skills as they are not typically allowed on the static gun range.”

The TAP training includes “shooting from different positions,” ”drawing under stress“ and ”drawing from concealment.“ Everman declined to specify which classes Johnson took.

“I don’t know anything about Micah. I’m sorry. He’s gone. He’s old to us. I have thousands of people,” Everman told The Associated Press on Saturday.

The two men, however, were friendly and talked in Facebook conversations in August 2014. Everman knew Johnson had been out of the country. Army officials said he had been deployed in Afghanistan around that time.

Everman suggested that Johnson “let me know when you make it down this way.”

“Will be great to get you back in the academy,” Everman said, according to a comment thread saved by the AP before Johnson’s Facebook profile was taken down.

More recently, a neighbour reported to investigators that Johnson had been seen practicing some sort of military drill in his backyard in the Dallas suburb of Mesquite, said Clay Jenkins, the Dallas County judge, the county’s most senior elected official.

Johnson donned a protective vest and used a military-style semi-automatic rifle for the shootings, which marked the deadliest day for U.S. law enforcement since the Sept. 11, 2001, terrorist attacks.

In all, 12 officers were shot just a few blocks from where President John F. Kennedy was slain in 1963.

Johnson was a private first class with a specialty in carpentry and masonry. He served in the Army Reserve for six years starting in 2009 and did one tour in Afghanistan from November 2013 to July 2014, the military said.

The attack began Thursday evening while hundreds of people were gathered to protest the police killings of Philando Castile, who was fatally shot near St. Paul, Minnesota, and Alton Sterling, who was shot in Louisiana after being pinned to the pavement by two white officers.

Video showed protesters marching along a downtown street about half a mile from City Hall when shots erupted and the crowd scattered, seeking cover.

Marcus Carter was in the area when people started running toward him, yelling about gunshots. Carter said the first shot sounded like a firecracker. But then they proceeded in quick succession, with brief pauses between spurts of gunfire.

“It was breaks in the fire,” he said. “It was a single shot and then after that single shot, it was a brief pause,” followed by many shots in quick succession.