Britain's Prime Minister pushed it into a referendum no one wanted or understood. And it should ruin his career.

British Prime Minister David Cameron turns to walk away as he finishes making a statement appealing for people to vote to remain in the European Union outside 10 Downing Street in London, Tuesday, June 21, 2016. Britain votes whether to stay in the EU in a referendum on Thursday. (AP Photo/Matt Dunham)

With the EU referendum too close to call, British Prime Minister David Cameron is facing a most unpalatable truth: Even if he wins, he loses.

In a YouGov poll earlier this month 82 per cent of respondents said they don’t trust Cameron on the issue of Brexit. He was lagging 13 points behind Boris Johnson, his pro-Brexit rival and next Tory leadership contender and 10 points behind Labour leader Jeremy Corbyn, a man oft-ridiculed for his lack of leadership skills.

With his approval ratings in tatters and his Conservative Party painfully and (perhaps irrevocably) split, he is looking at a miserable last half of what will be, he has already promised, a for-shortened second term. As for his legacy? Forget about it. That was effectively sunk during his reelection campaign—specifically, the moment Cameron decided to hold the nation hostage to a debate it would rather not have simply because it made it easier for him to cling to power.

There is a growing realization in many corners of the U.K. that the EU referendum should never have been called in the first place. Unlike the national sovereignty debates of Scotland and even Quebec, which were largely dependent on a people’s sense of cultural identity, the question of EU membership and whether it truly benefits Britain is exceedingly complex, fantastically dull, hugely important, and exactly the sort of thing policy-makers are elected to decide so normal people don’t have to.

As the esteemed academic and social scientist Richard Dawkins recently wrote in Prospect Magazine in response to the Brexit question: “How should I know? I don’t have a degree in economics. Or history. How dare you entrust such an important decision to ignoramuses like me? I, and most other people, don’t have the time or the experience to do our due diligence on the highly complex economic and social issues facing our country in, or out of, Europe.”

The EU referendum, you will remember, was conceived out of political horse-trading rather than a sense of social responsibility. Cameron threw it out to the Euro-skeptics in his party as a temporary bone to gnaw on, in the hope they wouldn’t hinder his struggle to hang on to power by splitting up the party for good. They didn’t, and now he’s paying for it—as are all Britons. Because if Britain leaves the EU it will mean enormous economic upheaval. This, at least, is according to the leaders of nearly every major public and private British institution as well as the Bank of England, NATO, the IMF and President Obama, who crossed the Atlantic last month with the express purpose of reminding Britain that it would be “at the back of the queue” when it came to negotiating a new trade deal in a post-Brexit world.

But despite these warnings, the pro-Brexit camp has made inroads with the British public on a myriad of fronts—by simultaneously dismissing Cameron’s rather tepid campaign as “Project Fear” while doing their fair share of fear-mongering themselves (mostly on the matter of immigration).

Last week the campaign took a horrifying turn with the brutal murder of Labour MP Jo Cox. A recent leader in the campaign for the welfare of Syrian child refugees, Cox was attempting to enter the public library in her constituency in Birstall, West Yorkshire, when she was shot three times, stabbed with a hunting knife and left bleeding on the sidewalk. Multiple witnesses at the scene said her attacker shouted “Britain first!” before the assault.

The Guardian‘s Polly Toynbee charged that the “toxicity of rhetoric” was a contributing factor in the crime. There are some in the Leave camp, she wrote, “whose recklessness has been open and shocking. I believe they bear responsibility, not for the attack itself, but for the current mood: for the inflammatory language, for the finger-jabbing, the dog-whistling and the overt racism.”

Indeed, just hours before Cox was attacked, U.K. Independence Party’s Nigel Farage unveiled a new ad campaign for Brexit featuring an image of hordes of refugees streaming toward the camera with the slogan, “Breaking Point: The EU has failed us all.” It was immediately compared to Nazi propaganda and denounced as the most egregiously xenophobic move yet in a campaign filled with fear and loathing.

One of the alarming things about the pro-Brexit movement is that it’s being advanced on so many divergent, and often contradictory, fronts. There are the sovereignty fetishists with their obsession with “getting our country back,” the free-market lovers, who would turn the U.K. into a next-generation Singaporean-style tax and business haven for the world’s superrich and, of course, the immigration obsessives who are determined to keep out the teeming hordes of Turkey—when and if that country is ever actually accepted into the EU.

Despite their vast ideological differences, what all these camps have in common is a thirst for what political analysts call “creative disorder”—essentially the idea that revolution will lead first to destruction of the system and then to a utopian rebirth. It is dangerous thinking when it comes to a system as peacefully serviceable (if imperfect) as the current EU.

While the country will go one direction or the other, Cameron’s leadership looks ready to implode either way. A vote to remain will not put an end to his party’s convulsions but merely start up the cycle all over again, or as Rafael Benhr put it in The Guardian, “the culture war that began as a domestic tiff in the Conservative party and evolved into a messy street brawl would go back indoors.” 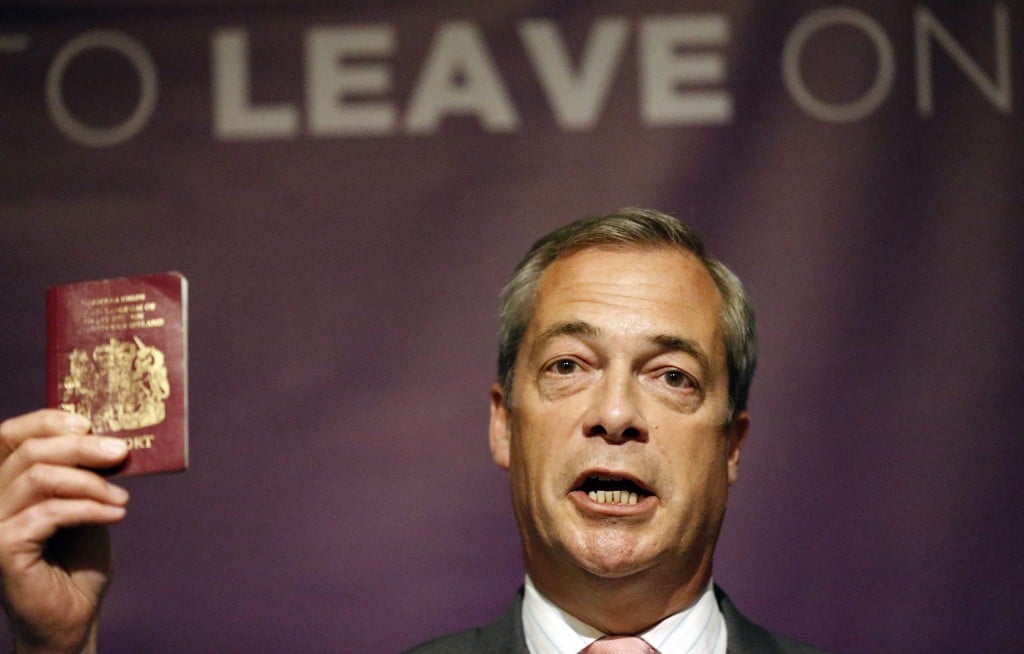 UK Independence Party (UKIP) party leader Nigel Farage holds his passport as he addresses media and party members during a speech focusing on the upcoming EU referendum in London, Friday, June 3, 2016. Farage is a leading campaigner advocating Britain to cut its ties with the rest of Europe, known by the nom de guerre ‘Brexit’. (AP Photo/Frank Augstein)

Of all the charges leveled against Cameron since he took office, the one that has stuck is the perception that he is a bit blasé about the job—an affable rich kid without conviction or vision who has surrounded himself with a boy’s club of arch-conservative libertarians. The spectre of Brexit not only gives credence to this view, it reveals the distressing truth that on a purely personal level, the outcome won’t make a whit of practical difference to Cameron. As his old friend and election advisor Steve Hilton recently told the press, Cameron’s true “instinct” is to leave the EU, not stay. “If he were a member of the public or a backbench MP, or a junior minister or even a cabinet minister, I’m certain he would be for Leave,” he said.

In other words, Cameron is really just playing at the position of leader, doing what he has to do, taking the stances he needs to take, until he can go back to being what he was born to be: A jolly chap with a big country house and a network of well-connected family and friends who will always make sure he ends up on his feet, no matter the state of the economy.

By allowing the Brexit debate to spill into the street and divide and imperil the nation, Cameron has revealed just how blasé he really is. As the Observer columnist David Mitchell recently put it, “Calling this referendum is the worst thing Cameron has done to Britain. It’s such a hugely selfish and irresponsible act that I can hardly believe we’ve wasted so long talking about how he’s eviscerating the  [National Health Service], attacking the BBC and slashing disability benefits when, horrendous though those developments are, this crime is much greater because its consequences could be irreversible.”

Whatever the outcome, Cameron will ultimately lose. But unlike most regular working British people, for him there is little at stake.