As senior officials suggest a high-altitude stall, fears grow about disasters similar to the AirAsia incident 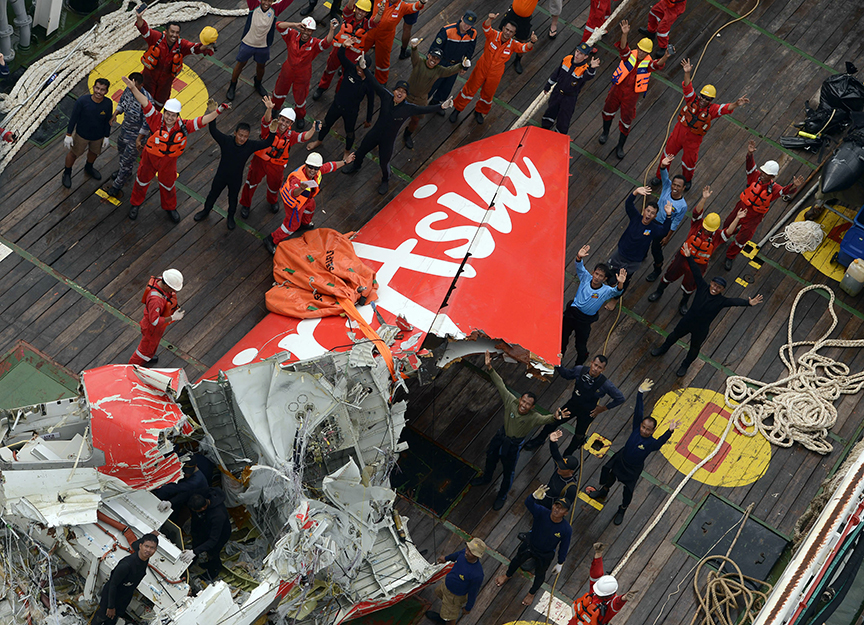 Indonesian investigators have yet to say what caused AirAsia Flight 8501 to plunge into the Java Sea, killing all 162 aboard. But with senior government officials suggesting the Airbus A320 stalled at high altitude, there are growing fears the crash will share troubling similarities with other recent aviation disasters—namely, pilots who lost control of an otherwise flyable airplane.

Air-traffic-control readings, along with data gleaned from Flight 8501’s black box recorders, recovered by divers last week, suggest the Airbus A320 experienced an aerodynamic stall at high altitude. About 40 minutes into the flight from Surabaya, Indonesia, to Singapore, the pilots requested permission to deviate from their route and climb from 32,000 feet to 38,000 feet to avoid an approaching storm. Their request wasn’t immediately granted, however. The plane’s radio transponder later showed the plane veered off course and began ascending rapidly before radio contact was lost.

“The plane may have climbed in the last minutes at a speed beyond normal limits. After that, it stalled. Why did it stall? I don’t know,” Indonesian Transport Minister Ignasius Jonan said this week. Meantime, the Wall Street Journal, citing sources close to the investigation, said the A320’s stall-warning alarm could be heard on the cockpit voice recorder as the pilot and co-pilot struggled to regain control of their plane.

Aerodynamic stalls occur when the plane’s wings lose lift, usually because the aircraft is flying too slowly or climbing too steeply. It’s not unlike a waterskier who begins to sink once he or she stops moving. In order to resume flight, pilots need to point the nose of the aircraft down to regain airspeed and restore lift to the wings. However, as past accidents have shown, it can be difficult for pilots to recognize what’s happening—alarms shriek in the cockpit and the plane becomes difficult to control—and they may not always respond correctly. Such “loss of control” accidents have been blamed for causing more than half of all aviation fatalities in the past decade, marring an otherwise enviable industry safety record.

Of course, exactly what transpired aboard Flight 8501 aircraft won’t be known until investigators release their full report, although some preliminary details are expected to be made public next week. The pilots may have experienced severe turbulence or found themselves caught in violent updraft caused by the bad weather. There could have been mechanical problems with the instruments that rendered the plane unflyable. The plane’s black box voice and data recorders should yield further clues, if they haven’t already.

What is known, however, is that, once the plane began to climb rapidly—reportedly faster than the A320 is designed to do—the pilots’ ability to manually control their airplane, if that’s indeed what they were trying to do at that point, would have become vastly more difficult. As the air becomes thinner and colder at higher altitudes, the speed at which a plane can experience an aerodynamic stall rises while the speed at which it hits the sound barrier falls. Fly too fast and the aircraft will experience buffeting, too slowly and it will fall from the sky. “Flying an airplane manually at those altitudes is like trying to balance a ruler on your fingertip,” says Sunjoo Advani, a Netherlands-based expert in flight simulation, who spent the past six years heading an international team that rewrote the rulebook on training pilots to deal with stall emergencies.

An eerily similar sequence of events led to the loss of Air France Flight 447 back in 2009. The Airbus A330 was a few hours into its overnight flight from Rio de Janeiro to Paris, when the pilots flew into a line of thunder clouds, common near the equator. The pilots lost their speed readings when the plane’s exterior sensors, called pitot tubes, iced over, the investigation later revealed. As the plane bounced through turbulence, the stricken pilots, inexplicably, put the plane into a climb, causing it to stall. Despite alarms sounding repeatedly in the cockpit, the pilots failed to recognize what had happened. They fought to regain control for three and a half harrowing minutes as the plane fell in total darkness. All 228 aboard died.

The shocking Air France disaster galvanized the industry, coming as it did on the heels of two other deadly stall accidents: the 2009 crash of Colgan Air Flight 3407 near Buffalo, N.Y., (50 dead) and the 2009 crash of Turkish Airlines Flight 1951 on approach to Amsterdam’s Schiphol airport (nine dead, 54 injured). Advani was tapped to lead a team of global experts to investigate whether there were gaps in pilot training programs that needed to be fixed. They found that pilots receive most of their training about stalls and manual recovery techniques early in their career—it’s essentially Flying 101—but most of their ongoing training, usually performed in simulators, tended to be focused on managing the plane’s complex autopilot systems, which do most of the actual flying in a modern aircraft. In the case of an approaching stall, pilots were being trained to power up the engines and maintain altitude, which is fine if the aircraft is merely approaching its stall speed, but can actually make matters worse if the plane is on the cusp of the real thing or cruising at higher altitudes.

The group suggested a revised approach in late 2012. It re-emphasizes the importance of manual flying skills and, where possible, makes use of  small aerobatic airplanes in addition to simulators. The idea is to better train pilots to recognize what a stall looks and feels like, and how to avoid dangerous situations that could lead to them. It also teaches pilots how to react more decisively when faced with a stall emergency: Point the plane’s nose downward until the wings regain lift. While the new approach might initially run counter to a pilot’s basics instincts—the last thing anyone wants to see when falling out of the sky is the ground hurtling toward him—Advani says it’s necessary to retrain pilots’ brains, since pitching the nose forward to pick up speed, as if on a roller coaster, may represent their only chance for survival. “It is a significant change to how we train pilots, in that it encourages manual flying, rather than always relying on the automation,” Advani says.

The new training regime has already been adopted by the International Civil Aviation Organization and has been signed into law in the United States, although it won’t actually be implemented there until 2019. In Europe, meanwhile, regulators plan to publish new rules on upset prevention and recovery training this spring. In 2013, Transport Canada sent an advisory circular to airlines that instructed pilots to focus on reducing the plane’s angle of attack (point the nose down) if faced with an aerodynamic stall.

Some airlines aren’t waiting to be told what to do. South African Airways, for one, spent more than a year retooling its training program and retraining its instructors, with the costs being offset by the airline’s insurer. It began retraining its pilots this month. “The release of the accident reports regarding Air France, Colgan and Turkish Airlines made us realize that we need to address the shortcomings of advanced automation—a decrease in manual flying skills by the average airline pilot,” says Brad Bennetts, the program’s project manager. He adds that, so far, the South African Airways pilots who have undergone the new training sessions claim the sessions have “greatly improved their confidence to fly the aircraft” in both normal flight conditions and when things get hectic—which, it should go without saying, is when a pilot’s steady hand is needed most.