Death toll climbs in the rubble and chaos of Nepal 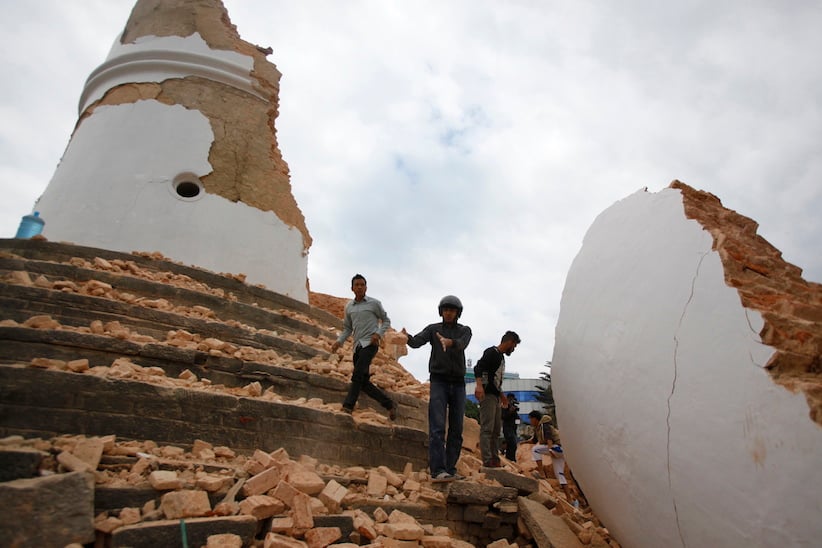 KATHMANDU, Nepal — Tens of thousands of people were spending the night in the open under a chilly and thunderous sky after a powerful earthquake devastated Nepal on Saturday, killing more than 1,800, collapsing modern houses and ancient temples and triggering a landslide on Mount Everest. Officials warned the death toll would rise as more reports came in from far-flung areas.

The magnitude 7.8 earthquake, which originated outside the capital Kathmandu, was the worst tremor to hit the poor South Asian nation in over 80 years. It strong enough to be felt all across the northern part of neighbouring India, Bangladesh, Tibet and Pakistan, where a total of 50 people died.

As Nepal trembled, residents fled homes and buildings in panic. Walls tumbled, trees swayed, power lines came crashing down and large cracks opened up on streets and walls. Clouds of dust began to swirl all around.

Within hours of the quake, hospitals had filled up with hundreds of injured people. With organized relief and rescue largely absent, many were brought to hospitals by friends and relatives in motorized rickshaws, flatbed trucks and cars. Residents used their bare hands, crowbars and other tools to dig through rubble and rescue survivors.

More than two dozen aftershocks jolted the area after the first quake, which struck just before noon. At the time, Shrish Vaidya, who runs an advertising agency, was in his two-storey house outside the capital Kathmandu with his parents.

Once the first shaking stopped, Vaidya thought his family could return indoors by evening. But the jolts kept coming, and they felt safer outdoors.

“It’s cold and windy so we are all sitting in the car listening to the news on FM radio,” he said. “The experts are saying it’s still not safe to go back inside. No one can predict how big the next aftershock will be.”

So the family ate dinner outside with the headlights of their car providing light. Vaidya was grateful his wife and 10-year-old son were on holiday in the U.S. 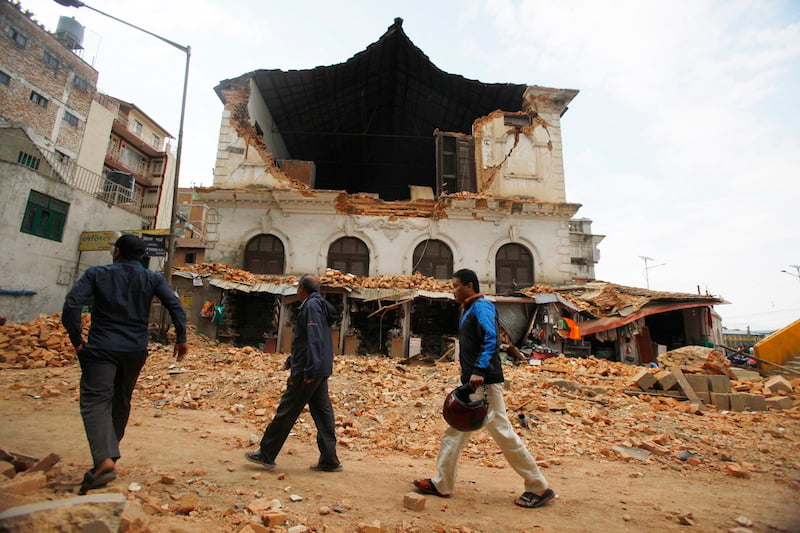 People walk past a building that was damaged in an earthquake in Kathmandu. (AP)

In his largely affluent neighbourhood of low-rise, sturdy homes in suburban Kathmandu the damage was relatively light. In other parts of the city where the buildings are older and poorly built people have not been as lucky.

Forecasts called for rain and thunder showers later Saturday and Sunday and the temperatures were in the mid-50s (14 Celsius), cold enough to make camping outside uncomfortable.

Thousands of people were spending the night at Tudikhel, a vast open ground in the middle of Kathmandu, just next to the old city that is lined with historic buildings and narrow lanes. Now it is in ruins.

People lay on plastic sheets or cardboard boxes, wrapped in blankets. Mothers kept their children warm; some lit fire with whatever wood they could find. Most were eating instant noodles and cookies.

Deepak Rauniar, a shop worker who was there with his friends, said: “We are too scared to go back to our apartment. It is surrounded closely by houses, most of them old. The houses could collapse while we are still sleeping.”

Prime Minister Sushil Koirala, who was attending a summit in Jakarta, tried to rush back home but made it as far as Bangkok where his connecting flight to Kathmandu was cancelled because the capital’s international airport was shut down for commercial flights.

While the extent of the damage and the scale of the disaster were yet to be known, the quake will likely put a huge strain on the resources of this poor country best known for Everest, the highest mountain in the world, and its rich Hindu culture. The economy of Nepal, a nation of 27.8 million people, relies heavily on tourism, principally trekking and Himalayan mountain climbing.

A mountaineering guide, Ang Tshering, said an avalanche swept the face of Mt. Everest after the earthquake, and government officials said at least 10 climbers were killed and 30 injured. Their nationalities were not immediately known.

Carsten Lillelund Pedersen, a Dane who is climbing the Everest with a Belgian, Jelle Veyt, said on his Facebook page that they were at Khumbu Icefall , a rugged area of collapsed ice and snow close to base camp at altitude 5,000 metres (16,500 feet), when the earthquake hit.

“Right now, it is pretty chaotic and we try to help those injured,” Pedersen wrote in an email to Danish news agency Ritzau.

Norwegian climber Teodor Glomnes Johansen told a newspaper in Norway that people at base camp were working on saving lives.

“All those who are unharmed organize help with the rescue efforts. Men, women and Sherpas are working side by side. The job right now is to assist the doctors in the camp here,” Glomnes Johansen told Norway’s VG newspaper.

The shallower the quake the more destructive power it carries. 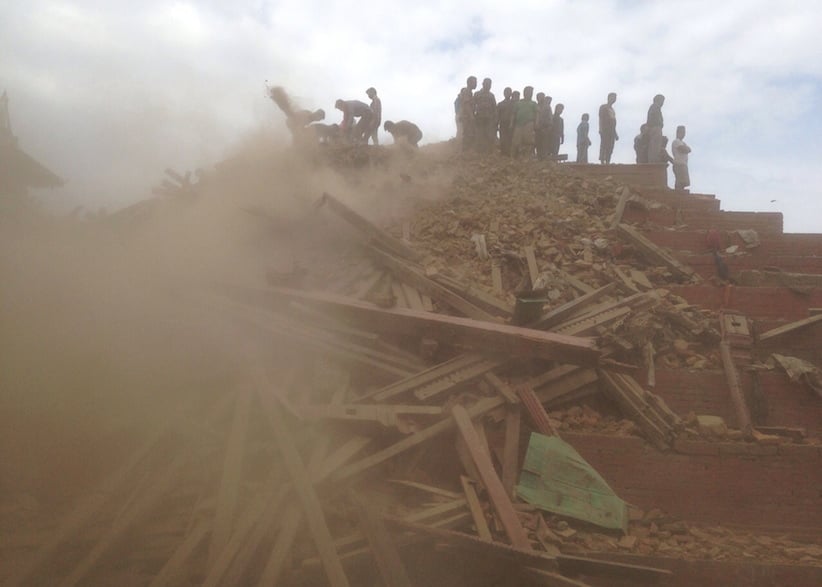 Volunteers help with rescue work at the site of a building that collapsed after an earthquake in Kathmandu, Nepal.

A magnitude 7 quake is capable of widespread and heavy damage while an 8 magnitude quake can cause tremendous damage. This means Saturday’s quake — with the same magnitude as the one that hit San Francisco in 1906 — was about 16 times more powerful than the 7.0 quake that devastated Haiti in 2010.

The quake occurred at the boundary between the two pieces, or plates, of Earth’s crust, one of which supports India to the south and the other Eurasia to the north. The Indian plate is moving at 45 millimeters (1.7 inches) a year under the Eurasian plate, and this results in earthquakes once every 500 year on an average, said

Marin Clark, a geophysicist at University of Michigan, Ann Arbor.

So the quake was “definitely not a surprise,” she said. Over millions of years, such quakes have led to the uplift of the Himalayas.

The power of the tremors brought down several buildings in the centre of the capital, the ancient Old Kathmandu, including centuries-old temples and towers.

Among them was the nine-story Dharahara Tower, one of Kathmandu’s landmarks built by Nepal’s royal rulers as a watchtower in the 1800s and a UNESCO-recognized historical monument. It was reduced to rubble and there were reports of people trapped underneath.

Hundreds of people buy tickets on weekends to go up to the viewing platform on the eighth story, but it was not clear how many were up there when the tower collapsed. Video footage showed people digging through the rubble of the tower, looking for survivors.

Nepal suffered its worst recorded earthquake in 1934, which measured 8.0 and all but destroyed the cities of Kathmandu, Bhaktapur and Patan.