'Your Holiness, thank you for granting me this private audience with you' 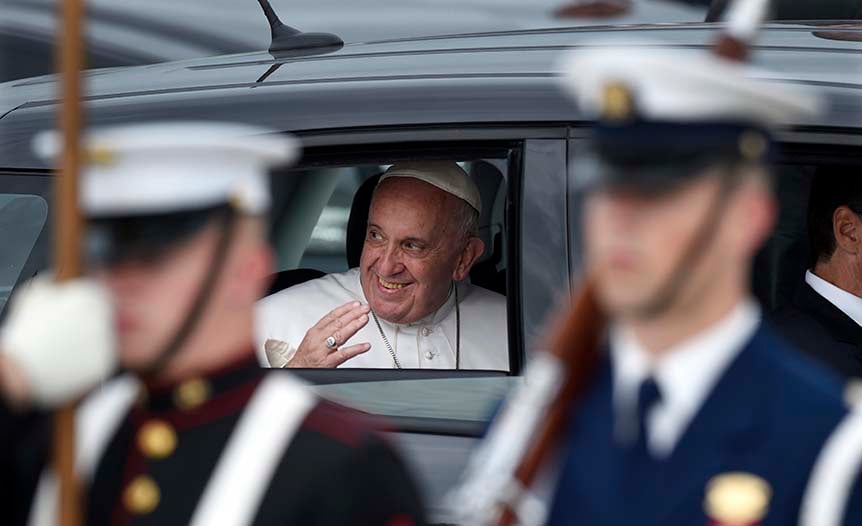 VATICAN CITY — Actor Leonardo DiCaprio brushed up his Italian to greet Pope Francis at the Vatican Thursday, discussed their shared concern over the environment and gave the pontiff a check for his charitable works.

“Your Holiness, thank you for granting me this private audience with you,” DiCaprio said in Italian as he arrived in the Apostolic Palace and kissed the pope’s ring.

Later, in English, DiCaprio offered Francis a book of works by the 15th-century Dutch painter Hieronymus Bosch, and showed him the reproduction of Bosch’s “Garden of Earthly Delights” that had hung over his crib as a child. The triptych, which DiCaprio has referred to in the past, depicts Adam and Eve in the first panel, a teeming landscape in the centre panel, and finally a vision of hell.

“As a child I didn’t quite understand what it all meant, but through my child’s eyes it represented a planet, the utopia we had been given, the overpopulation, excesses, and the third panel we see a blackened sky that represents so much to me of what’s going in in the environment,” DiCaprio told the pope.

Francis’ encyclical Laudato Si (Praise Be) has been embraced by environmentalists for its denunciation of the world’s fossil fuel-based economy and its demand for greener energy sources.

An assistant then handed Francis an envelope and explained it was a cheque for the pope to use for charity works “close to your heart.”

Di Caprio, nominated for an Oscar for his role in “The Revenant,” is a longtime environmental campaigner who in 1998 launched his Leonardo DiCaprio Foundation to support initiatives aimed at sustainability.

He recently addressed the World Economic Forum in Davos, Switzerland, announcing the foundation was donating another $15 million to environmental projects and pleading with business leaders to battle global warming.

Francis gave DiCaprio a leather-bound copy of Laudato Si and his earlier document, The Joy of the Gospel.

DiCaprio was accompanied by his father, George DiCaprio, and Milutin Gatsby, global fundraising chair for the foundation.