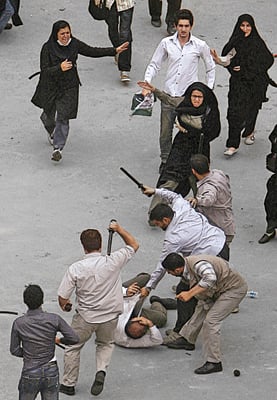 Iran’s northwestern border with Iraq is mountainous and sparsely populated. It has long been traversed by smugglers. Much of the illegal alcohol Iranians drink is carried over the mountains here. The region is also a popular escape route for political dissidents fleeing the country. Ahmad Batebi, whose face became iconic when the Economist magazine ran a cover photo of him holding up the blood-spattered shirt of a fellow protester, slipped across the border while on temporary leave from prison in 2008. Popular blogger Alireza Rezaei fled by the same route earlier this year. But dissidents who make it into Iraqi Kurdistan are not free from threats by the Iranian government. Iran has a consulate in the northern Iraqi city of Erbil, and Iranian dissidents say Iranian security agents are active there.

“I have been threatened so many times that I’ve lost track,” Hoomam Sadiyeh, an activist from the mainly Kurdish city of Mahabad in northwest Iran, told Maclean’s. Sadiyeh has been in northern Iraq since 2004. Late last year he received an email from a sender identifying himself as Habib: “Silly boy, you might think we won’t be able to reach you, but we can reach you a lot easier than you might think. Also we know who your fiancée is and when she might be returning. We don’t want to hurt anyone. So stop what you’re doing.”

Another Iranian dissident in Iraq, who asked not to be identified because his family is still in Iran, recently received a threatening email from his former prison interrogator.

Sadiyeh said the flow of Iranian dissidents into Iraq increased after the 2009 presidential election and the crackdown that followed it. He said the pressure to which these activists are subject in Iraq has had an effect. Many have stopped their political activities. Others have fled to Europe, some illegally. Sadiyeh had originally planned to stay in Iraq. Now he, too, has registered with the United Nations as a refugee and hopes to live elsewhere.